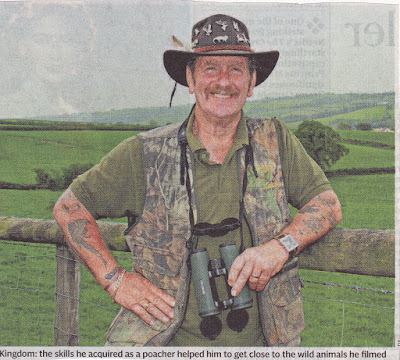 It was sad to see that Johnny Kingdom was killed recently when a digger overturned while he was working on his farmland in his beloved Devon. He was 79, lived most of his life on and around Exmoor and was one of those countryside characters still steeped in all the old ways that you rarely see or hear about these days.
Throughout his life Johnny was a farm labourer, poacher, quarryman, lumberjack and gravedigger and in his latter years, an excellent maker of wildlife documentaries that were shown on BBC2. In one hand he probably had more knowledge of the countryside, it's wildlife and weather, than all the presenters on the awful BBC Countryfile put together. He came from the mould that made the likes of Jack Hargreaves, Olly Kite, Phil Drabble and several others, people that didn't need a script, fancy clothing and make-up to present a wildlife programme.
I had a lot of time for him because he spoke of a countryside and it's ways that I can identify with and have dabbled with throughout my life.
Posted by Derek Faulkner at 12:11