There is an LP that has been one of the features on the shelves in my study for countless years, I bought it around 1964. It was Bob Dylan's second album and was released in 1963 and the album cover, below, has become an iconic feature of those early 1960's folk years for a lot of people. It shows the young Bob Dylan and his then girlfriend Suze Rotolo walking down a frozen Greenwich Village street in early 1963, posing for a series of photographs.
I've lost count of the times my eyes have been drawn to that album cover over the years, especially now in old age, and been taken back to those same years of my youth. 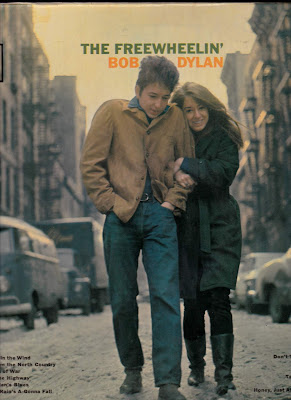 Taking me back to times like this, in late 1966 or early 1967. I was 19 and my girlfriend, who later became my first wife, was several years younger. 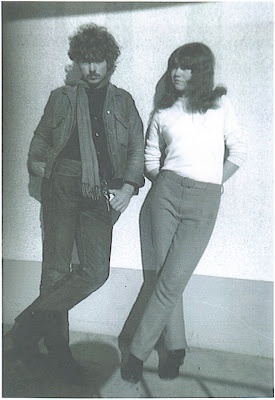 b
Those times seem an awful long way away now and I guess after 51 years, they most definitely are. But how simple life was then, no latest communication technology to crave after, no need to save wages, listening to the latest music releases by standing in a booth in your local record shop. Only the responsibility and financial restraints of marriage changed everything. This week for my Autumn reading pleasure in the coming weeks, I have bought three newly published books - "The Real Enid Blyton" by Nadia Cohern. I have read many books about Enid Blyton (she was not such a nice person) and have all 21 of the Famous Five books, and anything to do with her takes me back to my childhood in the 1950's and how her books allowed me to escape from an unhappy childhood.
"Made in Scotland - My Grand Adventures in a Wee Country" by Billy Connolly - easily the funniest comedian Britain has ever produced, I could watch him all night.
"The Extraordinary  Life of  E Nesbit" by Elizabeth Galvin. I've never read any of her well known books but was drawn to this book by the fact that she lived a bohemian life-style and I have quite a collection of books now about people that have lived that kind of life-style, such as the Bloomsbury Group. I can so easily identify with that way of life in the 1920's/30's and would love to have lived it - the best I could do was the 1960's, when we indulged in some drugs, lots of drinking and group sex - I miss it.