A Grey Day in May 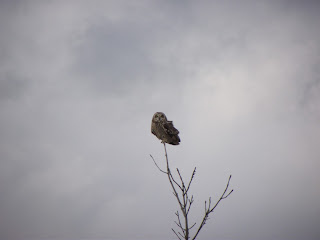 It was a quite uninspiring visit to the reserve this morning, weatherwise. Low, grey clouds made for poor light conditions and a cold N wind pushed in bouts of light drizzle as I walked round, all very non-summer. The weather forecast for May suggests a repeat of April's, which is all very depressing as it only leaves us June in which for it to be warm and sunny, hot even, this summer. I've already discounted July because the Olympics are on then and the British summer is guaranteed to embarrass us through those.
We still have two Short-eared Owls using the reserve on a daily basis and this one watched me as I drove onto the reserve, perhaps resenting the fact that I was disturbing its hunting. It's a bit of a distant shot but comes up a bit better if you double click on it - perhaps Adam Winehouse and I share the same "take it as it is " philosophy.
I've established a lot of willow bushes/trees around the barn area over the years by simply pushing broken-off branches into the ditch edges and the photo below shows one of the very first that I established along the reserve's boundary. There are several of these, all around twenty years old now, along a stretch of ditch that we have now nick-named "Willow Walk". 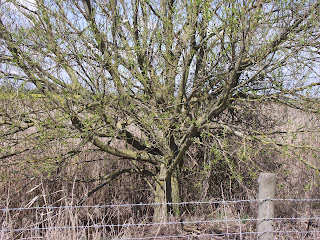 One day last week while walking round the reserve, I saw a domestic type of pigeon come flying across the sky at some speed and height, pursued by a Peregrine falcon. Closing in on the pigeon the Peregrine rose up before stooping down to try and catch the bird in its claws. Somehow, after making three attempts to grab the pigeon, the Peregrine was still unsuccessful and before it could try a fourth time the pigeon suddenly dropped like a stone and landed alongside a ditch bank. Unable to stoop on the bird for fear of hitting the ground the Peregrine circled the bird and tried to scare it back up into the air but the pigeon was having none of it and sat tight until finally the Peregrine sped off into the distance.
This morning I was also surprised to see a Buzzard close to the reserve being strongly mobbed by a pair of Marsh Harriers. That quite surprised me as I would of thought that the two species would of got on OK but the fact that the harriers had a nest near bye might of had something to with it. For a while the buzzard simply  sat on a fence post and ducked every now and then but eventually it got fed up and flew well away into central Harty.

Despite the plethora of both common and rare summer migrants all along the nearby mainland, here on our little island enclave of Sheppey, migrants are still thin on the ground. Several of the reserve's reed beds now have singing Sedge Warblers in them but Reed Warblers have still to arrive, I counted just the one this morning. Yellow Wagtails remain in the singular most days and Turtle Doves and Cuckoos are yet to be heard. This morning from my window at home I watched two Swifts flying across a  grey and cold sky and wondered why, why leave all the warmth and sun that they have to come to this and the desperate search for insects in such a cold and sunless sky.