One of the great pleasures about being retired is the fact that it normally allows you to take advantage of that special, out of the blue, day when it comes along. I spent so many frustrating years having to go into work on days that you just knew were going to be fantastic for being out and about in the countryside, or when "falls" of birds were guaranteed to happen. I guess the profession that I envied the most in those days was school teaching, so much time off throughout the year, especially in the summer and when I was stressed up to the eyeballs trying to meet targets and budgets, I used to dream about having six weeks off in the summer. But I'm retired now and so I don't have to envy those people and this morning was one of those special mornings that I didn't have to miss.
Arriving at the reserve barn under cloudless blue skies and with a sun that was becoming stronger by the minute was a real joy to experience. Skylarks were singing strongly over the grazing marsh and the first pair of Lapwings were carrying out their courtship displays, things were really looking and sounding good. That opinion was compounded when a cock Chaffinch began singing in one of the willow bushes alongside the barn, I love that sound, it's easily my favourite finch song. There's still plenty of time for the winter to have a sting in it's tail but let's hope that it doesn't.
Walking across the water-logged marsh to the sea wall hide, more and more of the surface water is now soaking into the ground and larger areas of grass are now beginning to be exposed and are drying out, it's all looking good. As I indicated in my last posting, the White-fronted Goose flock has begun to reduce as some birds have begun their journey north but this morning's tally was still 240 birds, all looking quite splendid in the morning sun. They've also quite clearly become used to the daily walk past by myself and the dogs, harmless as we are, and I was only a 100yds away from them when I took these photos with my little camera. 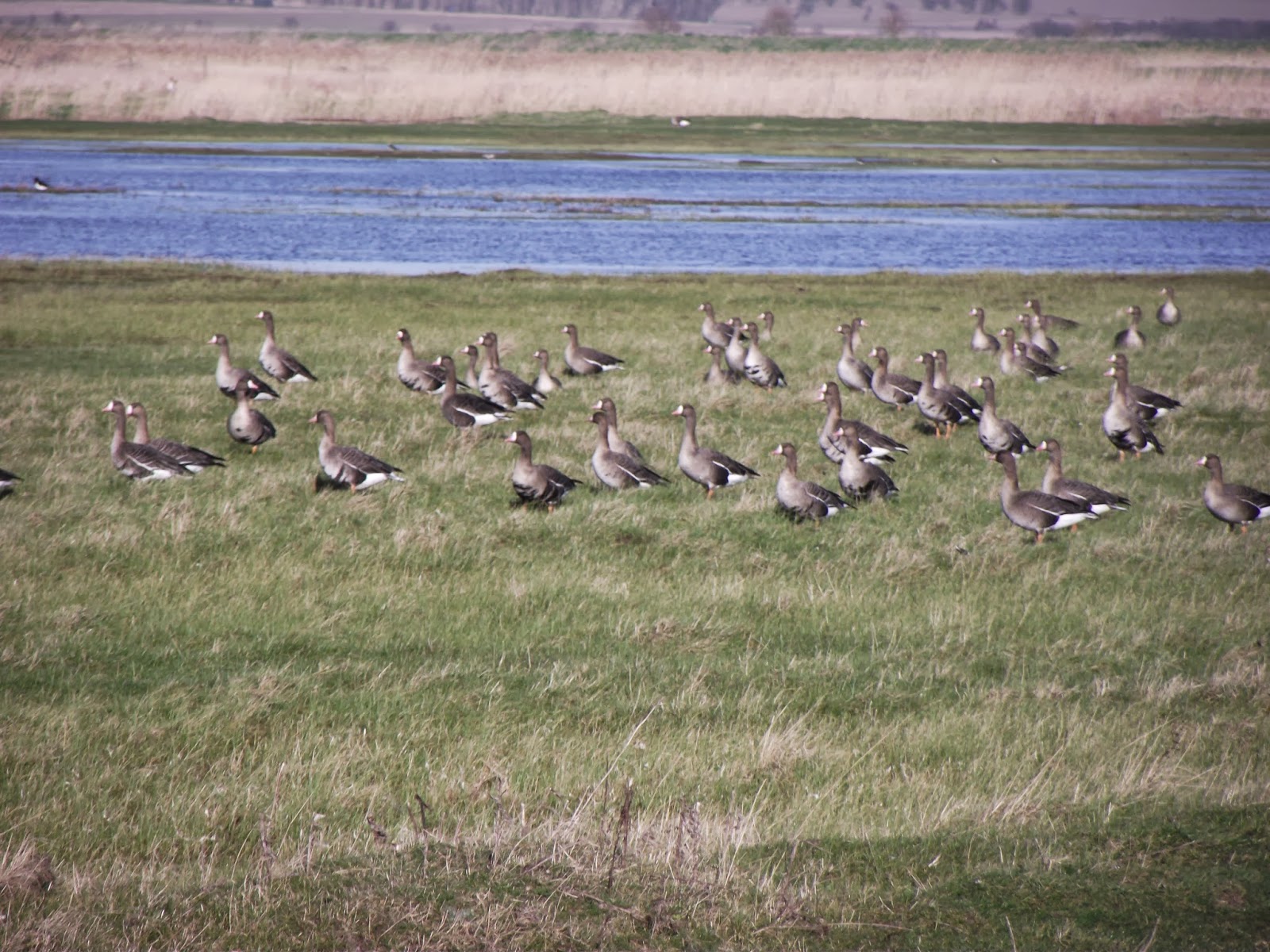 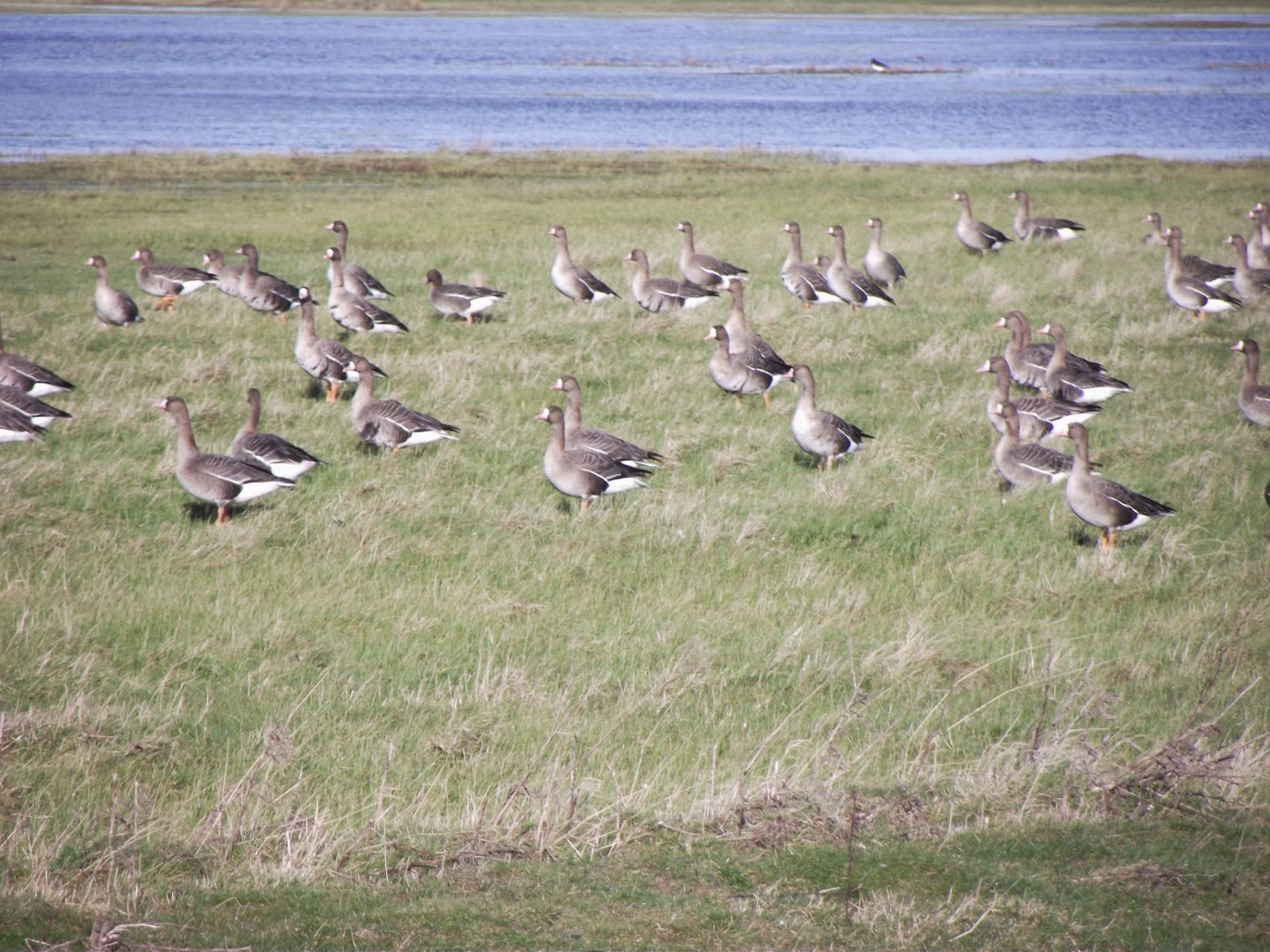 If you look at the centre of the photo below, you can see one of three Barnacle Geese that have been with the flock for the last week. 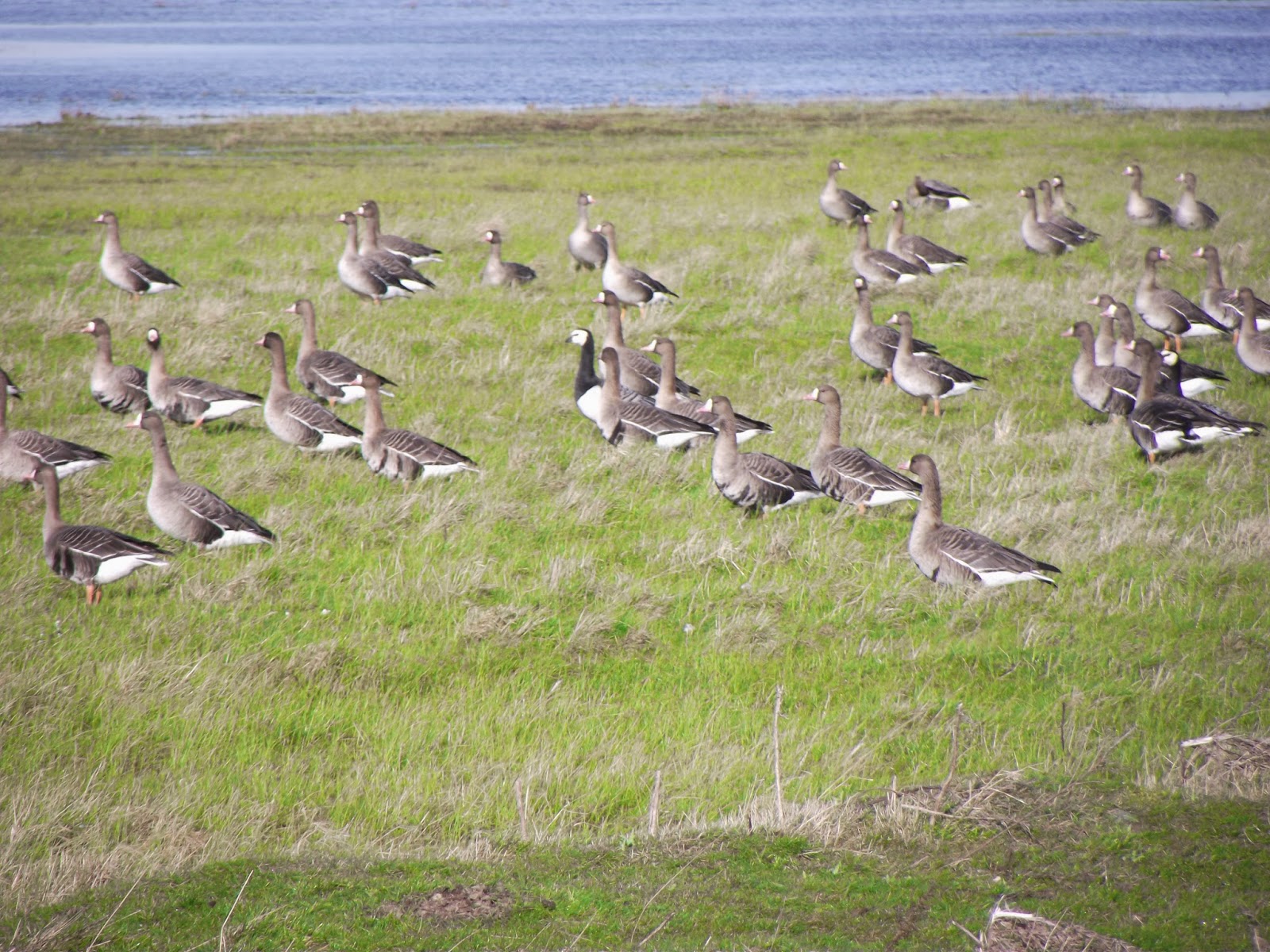 Eventually the flock decided that I was near enough and took flight and yet merely re-landed just a couple of yards behind me and so I sat down in the grass and watched them for a while through my binoculars, they are special birds. And just think, we just 3-4 weeks away now from those first Wheatears or Sand Martins! 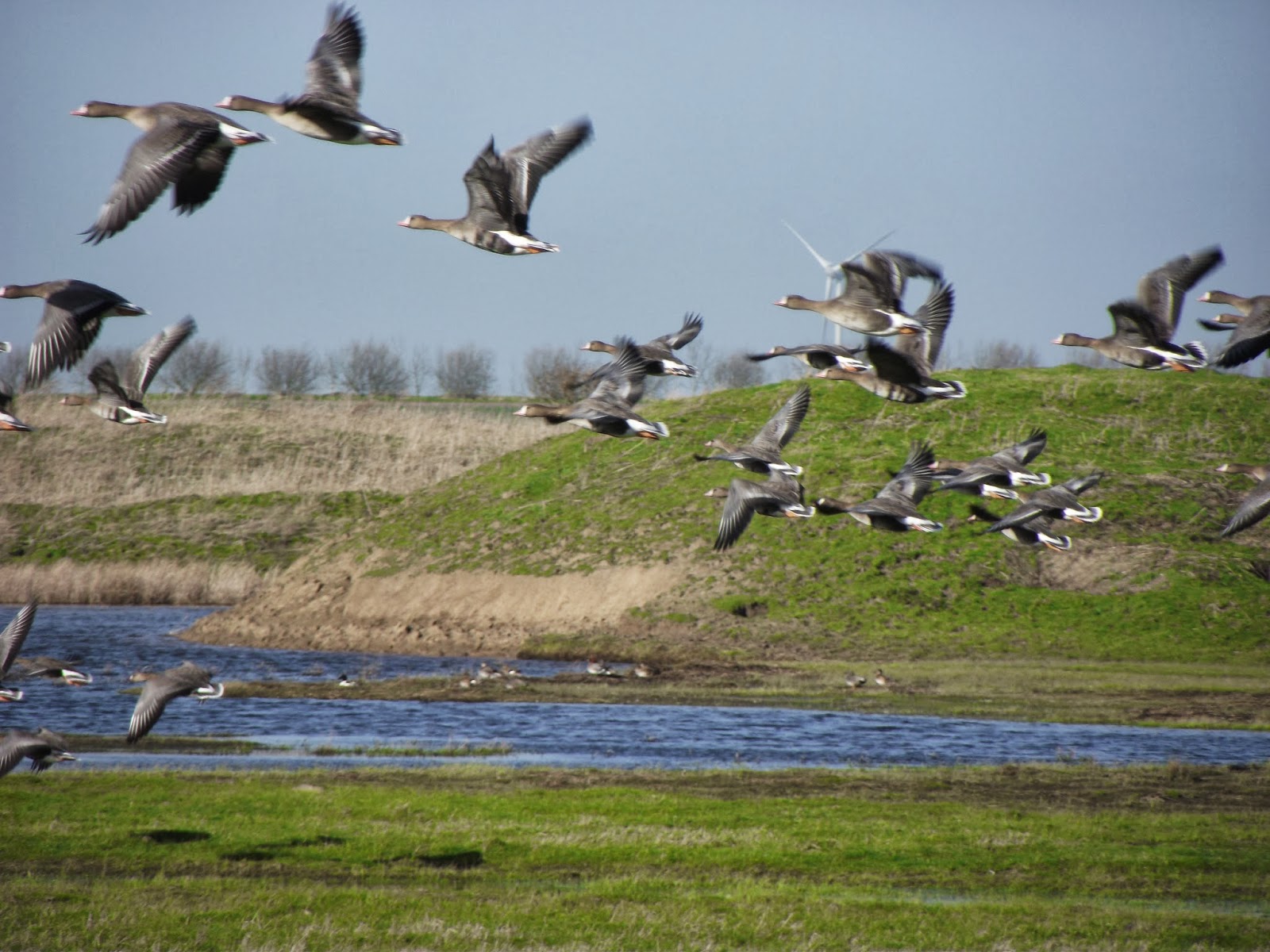 The tides are building for this weekend's Spring tides and this morning's was fairly high and was pushing many displaced waders onto the ideally waterlogged Flood Field to roost. At one stage in their I counted c.900 Dunlin, 200 Grey Plover, 200 Golden Plover, 1,000 Lapwing, 40 Avocet and a spattering of Curlew. As well as the Whitefronts and Barnacles there were also c.300 Greylag Geese and the rare sight of a pair of Canada Geese. Ducks also featured with 50 Shelduck - 90 Gadwall - 70 Shoveler - 14 Pochard - 6 Tufted Duck - 250 Wigeon - 300 Teal and 130 Coot.
It was a thoroughly great day and one that I was over-joyed not to have missed - it was a retirement winner!
Posted by Derek Faulkner at 13:58