Out and About Again

After spending most of the last week stuck indoors suffering the ravages of flu, the attraction of clear blue skies and strong sunshine outside this morning was too much to resist. So, well wrapped up and armed with a large handkerchief to combat a nose, running like a fireman's hose and almost the same colour, I set off for the reserve. Despite a chilly wind, on arriving there it was almost as if Spring had arrived overnight - blue skies, sunshine, greener-looking grass, lower water levels and a great cacophony of bird calls and song. From the Sea Wall hide the Flood field looked quite superb in all it's watery glory as I looked north across it to the Tower Hide in the background, with the sun behind me as you can see below. 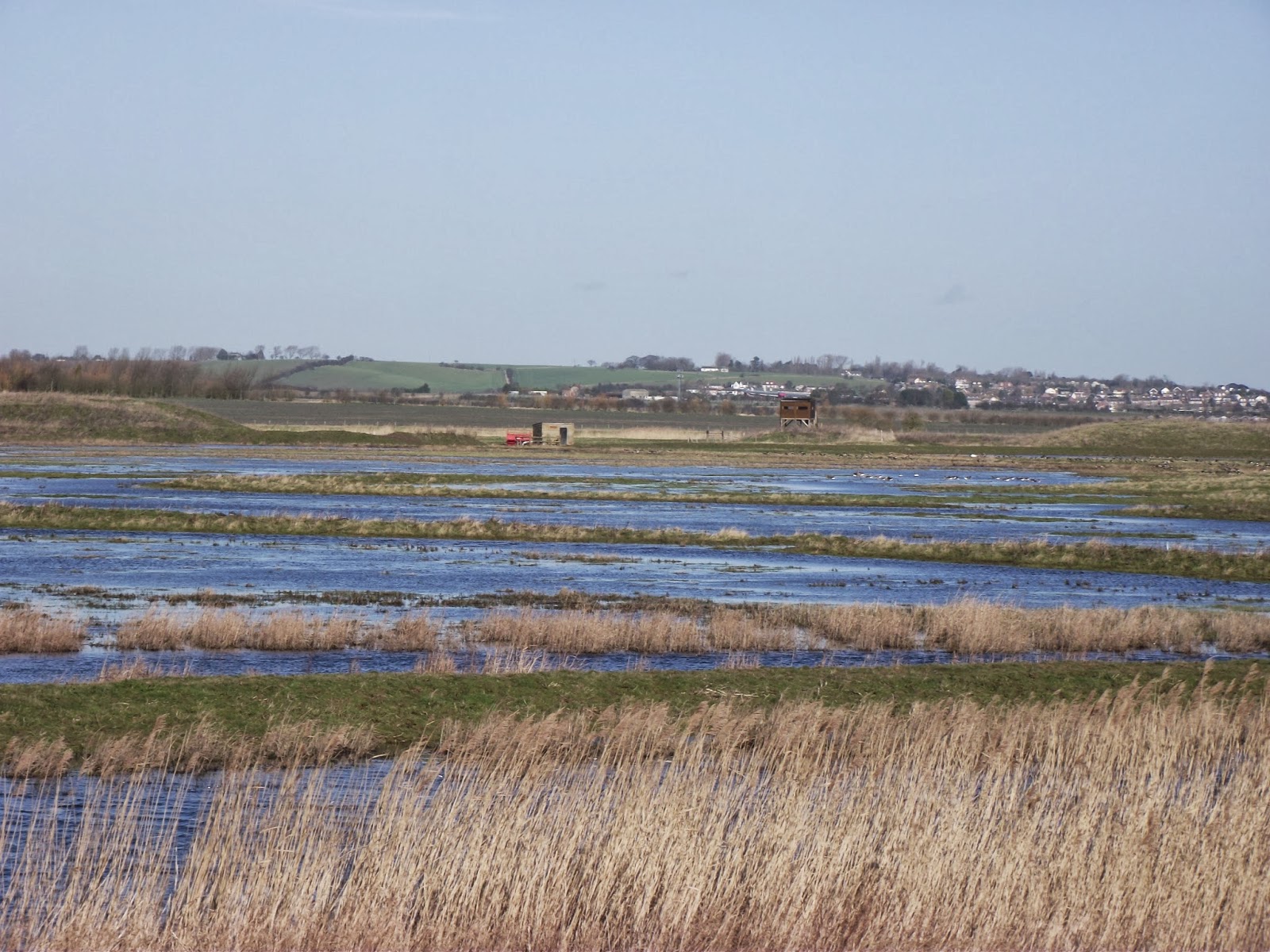 However, go round to the Tower Hide and photograph the same scene looking south into the sun and see how much the light changes the feel of it all. 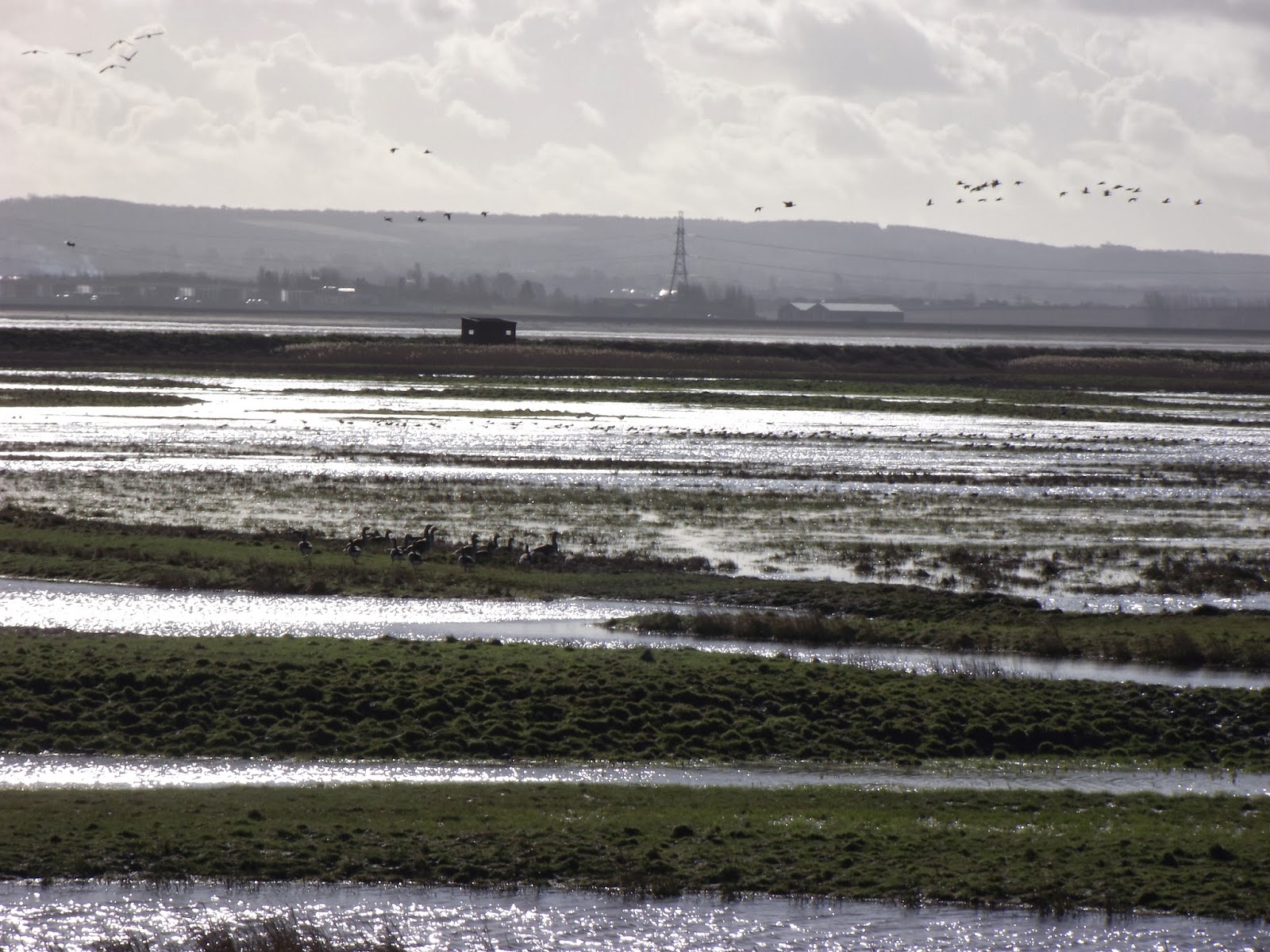 It wasn't until I got to the Tower Hide that I decided to take a photo of the 320 White-fronted Geese alongside The Flood and so the resultant photo doesn't show a lot against the light, yes those blobs are some of the geese. 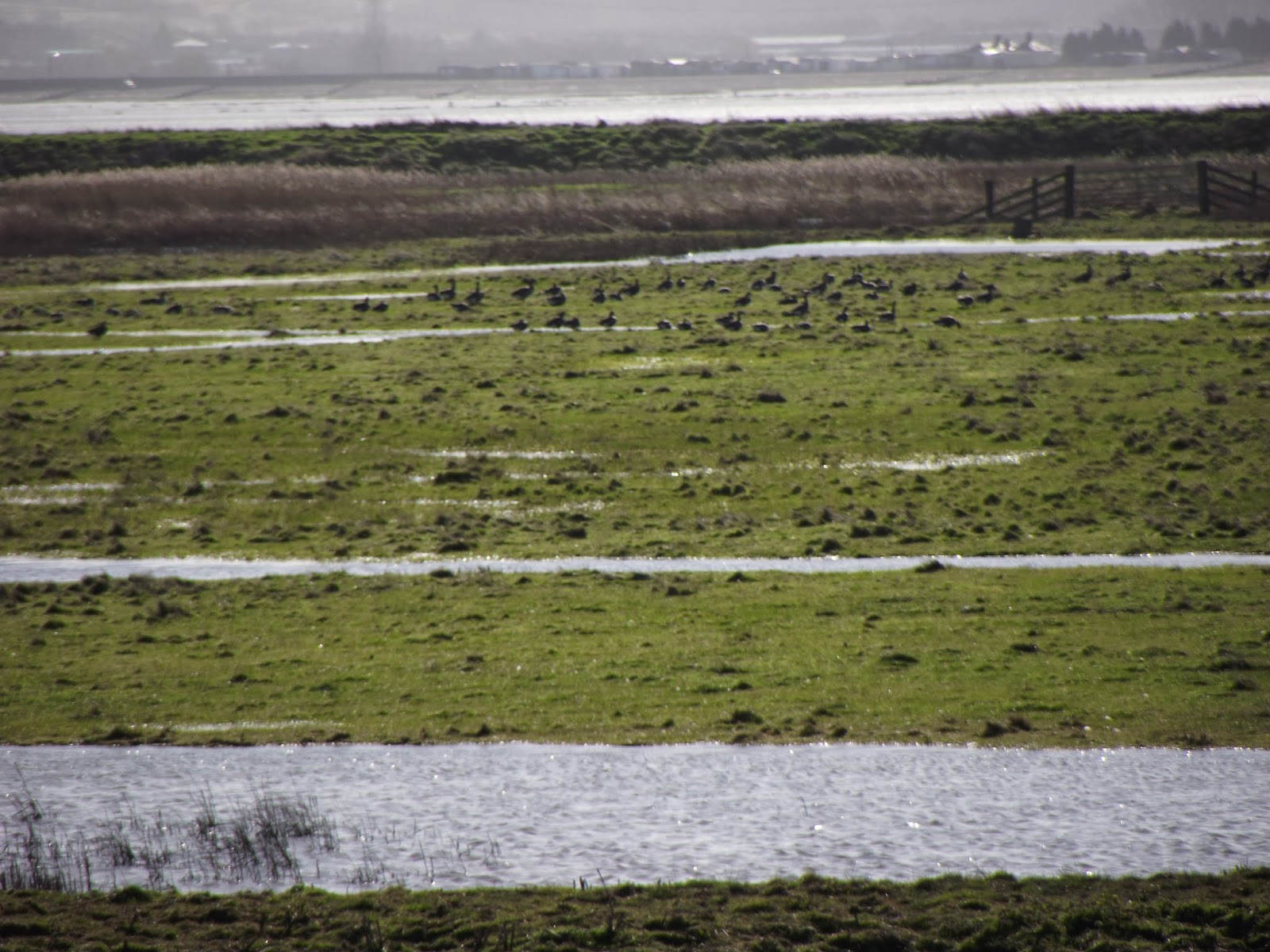 But the longer that I watched the Whitefronts the more restless that they became. It was as if the Spring-like feel of the morning was getting to them, that the North was calling them back and it was time to go. Over the space of an hour the flock got up and flew round the reserve almost continuously, only briefly landing before taking off again. Finally, it was clear that I had guessed right. At regular intervals, small groups of 20-30 birds began to peel away from the main flock, rose high into the blue sky, settled into a v-formation and with those beautiful, wild calls that Whitefronts have, flew off high towards the north, my heart went with them.
Below you can see the main flock as they circled over The Flood. 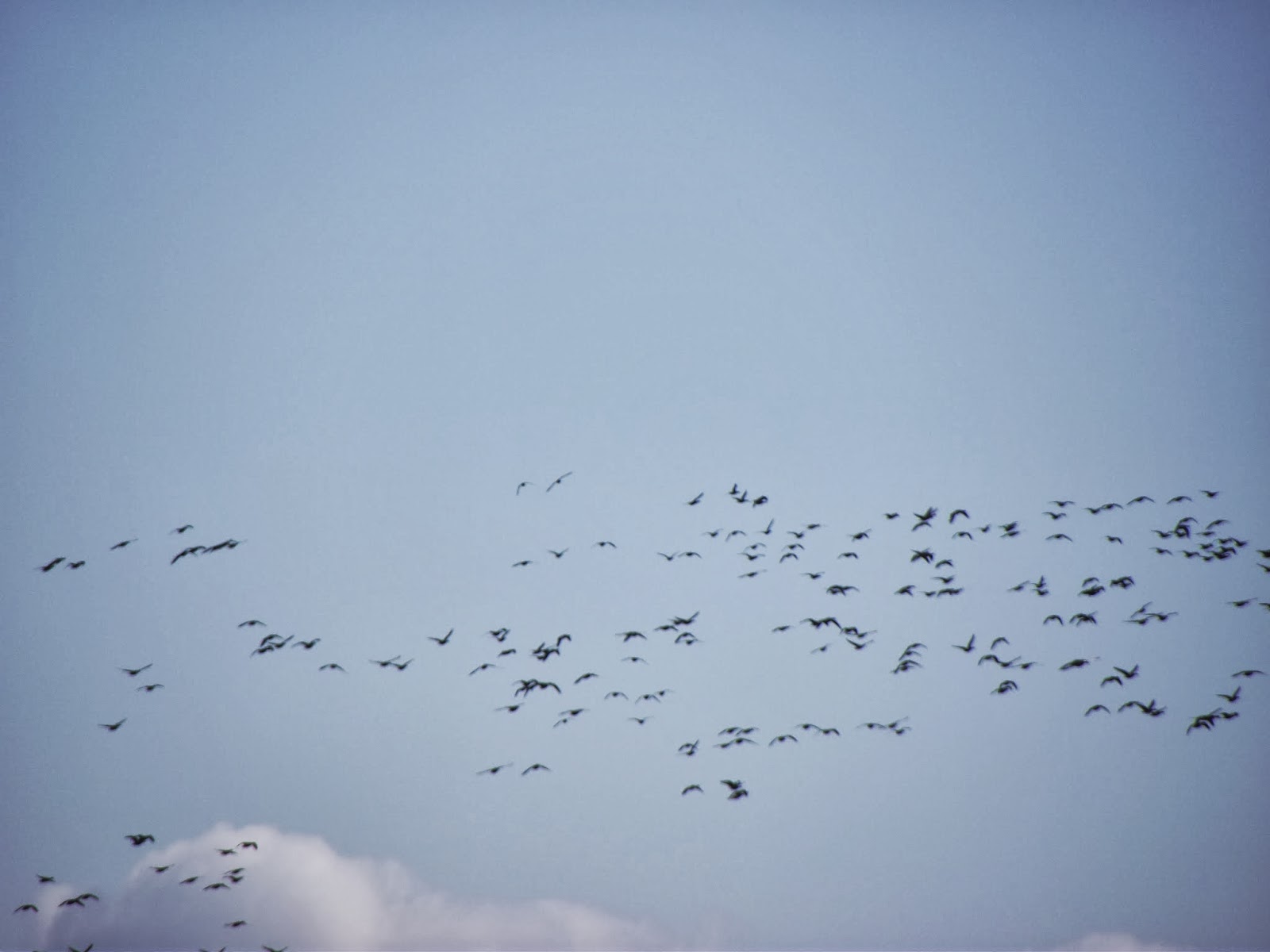 After that, what else did the morning produce from the flooded areas, well there were:-
40 Mute Swan - 320 White-fronted Geese - 380 Greylag Geese - 200 Mallard - 50 Shelduck - 400 Teal - 60 Shoveler - 80 Gadwall - 200 Wigeon - 120 Coot - 20 Ruff - 600 Golden Plover - 900 Lapwing - and a few other bits and pieces.
Talking of the White-fronted Geese going back home - one thing that won't be doing that unfortunately, is the Sperm Whale seen in the distance below. It's dead body was washed up on the mudflats off of the reserve yesterday morning and today it was still there, further out in the channel off of Shellness Point. 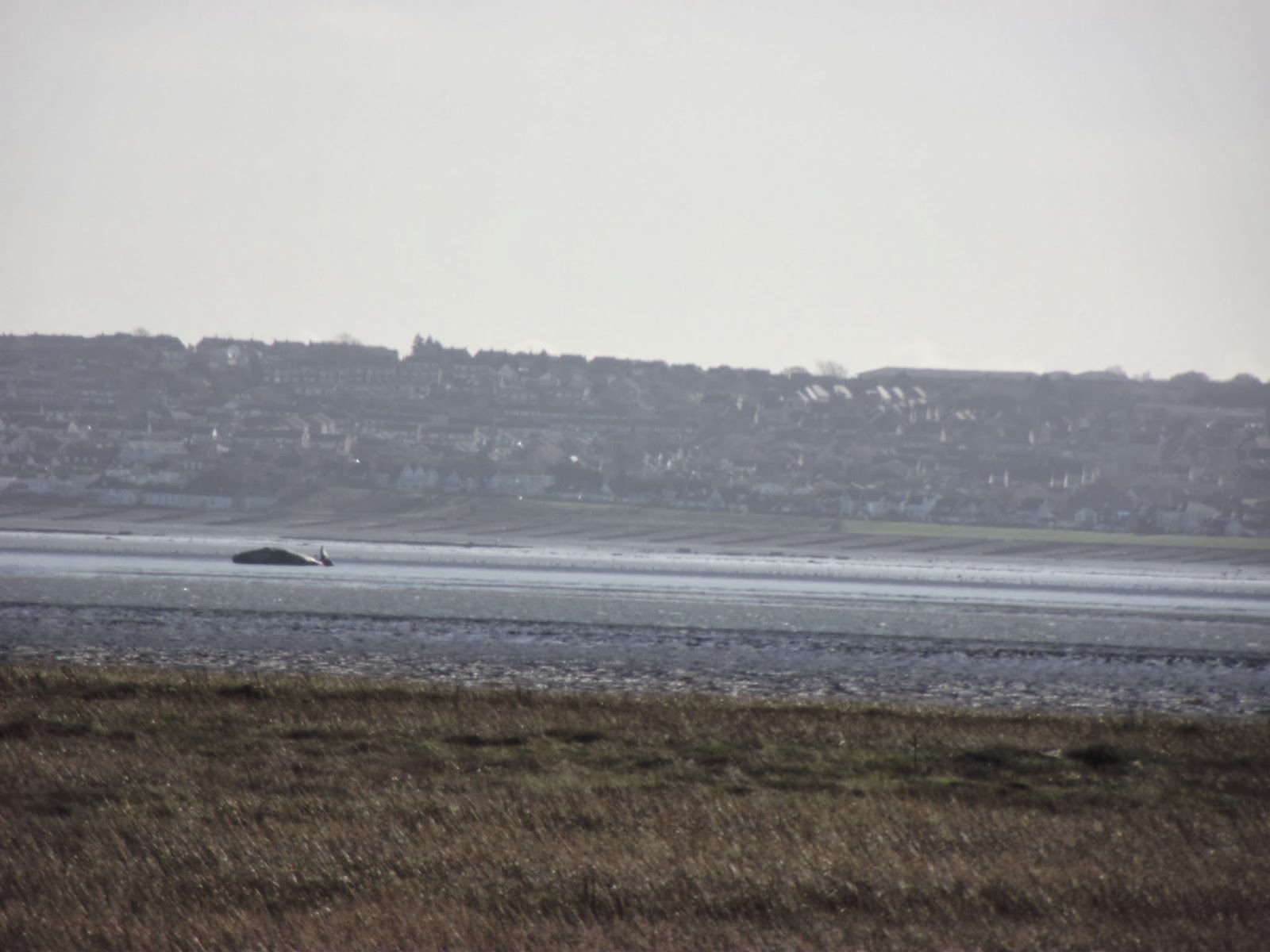 And lastly, the beautiful weather today of course tempted out all manner of the public to shrug off the damp and the gloom of recent weeks weather, and why not, it's too precious to miss. I could see people walking their dogs along Shellness beach, birdwatchers on Shellness Point, a jogger and his dog ran along the reserve sea wall and of course, I was there with my two dogs. I couldn't help but immediately chuckle over thoughts of two local birdwatching bloggers who so regularly complain in their postings about how all those types of people will insist on being out at the same time as them and spoiling their day. What a nightmare for them today might of been!
Posted by Derek Faulkner at 14:52