It was nice to get back on the reserve again this morning after a week off due to my oldest dog having to wait for a burst abscess on her foot to heal. Marsh water, mud and cow poo are not best allowed to get into an open wound! But now it has healed and so we were champing at the bit to get back out, it's funny how being there every day can get a tad boring but have a few days away and you miss it like mad. Arriving at the barn at 07.30 a magnificent orange sun had just come up above the sea wall and we set off, out into the grazing marsh. 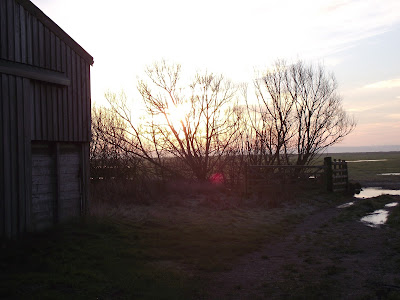 It all looked quite magnificent - a white frost, blue skies and a bright sun that is increasing in strength with every day. The sounds of birds were everywhere, with the geese being especially vocal as Canadas, Greylags, Brents and c.170 White-fronted Geese all regularly whirled about in the sky around me. Many of them were now in pairs and with Skylarks also serenading from above, the morning had a real feel that Spring is just around the corner.
Making my way across the marsh, I stopped a while on top of one of the old salt-working mounds and looked east across the reserve towards the distant Shellness Hamlet (see below). 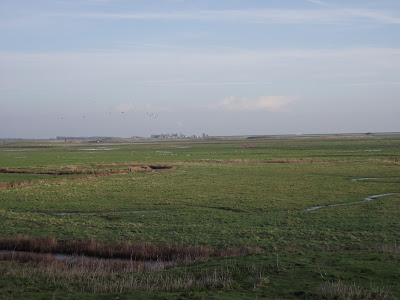 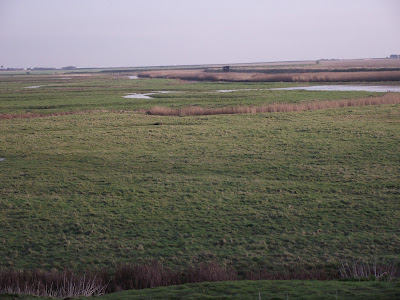 The particular mound that I was standing on is Ellie's favourite place on the whole reserve and she was dashing about all over the place................. 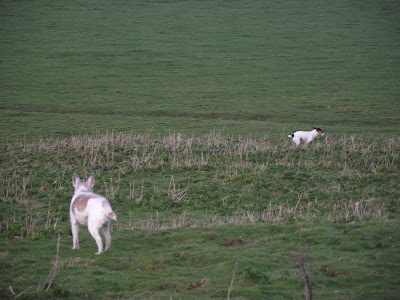 ............the reason being, it's the home to a couple of dozen rabbits. They run her ragged, disappearing down holes and then re-appearing behind her before running off to disappear down other holes. It's a kind of animal version of the teasing, "chase me charlie" but as much as they usually leave her breathless, they sometimes do pick the wrong hole, one that's quite short, with the obvious consequences. If you look hard below, you can see the rabbits sitting outside their burrows. 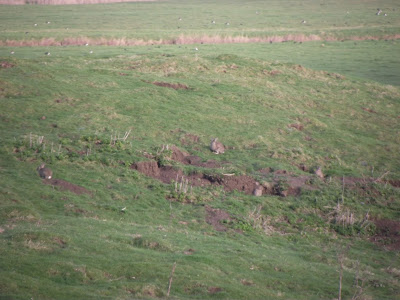 We carried on and it was nice to see that the Hooded Crow was still on the marsh, enjoying it's holiday down from Scotland. Last Friday, crow shooting was taking place on the farmland alongside the reserve, an unfortunate but necessary pest control ahead of the breeding season, and I thought that it might of got caught out by that. While many of us see something special in a Hooded Crow being this far south, I guess to a guy shooting crows, a crow is a crow, which of course it is.

On the subject of shooting, a thought came to me this week while reading the latest British Trust for Ornithology news magazine. An article in there mentioned the fact that the fourth Birds of Conservation Concern report was published in December last year. Apparently Woodcock and White-fronted Geese have now joined Grey Partridge on the Red List, the highest level of concern about various birds breeding, wintering numbers and rarity status. In respect of the above three species, it beggars the question, if there is a high level of concern over their diminishing numbers, why are they still allowed to be shot each winter in un-limited numbers, surely that's like throwing petrol on the fire.
Now clearly the shooting fraternity, driven to a high level of paranoia in recent times by various attacks on their past-time, (hen harrier deaths, using lead shot, buzzard controls), will defend to the hilt maintaining these birds as quarry species, scared to give an inch in case it becomes a mile. Now, whatever their answer is, I'm not expert enough to answer either for or against it, but as a simple layman, defending the un-restricted killing of birds that are diminishing in numbers does seem a tad odd.
Posted by Derek Faulkner at 14:33