I wonder how many people, looking at the bird below, will know what it is. 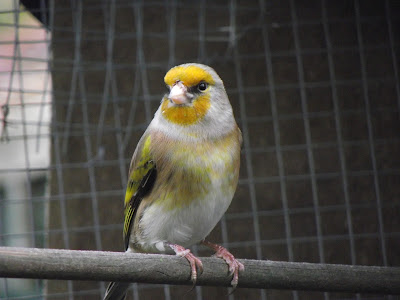 It's known as a Goldfinch mule, one of six that I bred last year in my aviary. I also bred a Siskin mule.
Mules are the offspring that result from crossing a British finch with a canary, in most cases using a cock finch and a canary hen. This the commonest colour that emerges but by using different types of canaries surprising colours can be the outcome, I have seen pure white Goldfinch mules with an orange facial blaze. My Siskin mule simply looks like a green canary with some Siskin markings but sings very loud and beautifully in the canary style as do the Goldfinch mules.
I have bred canaries for a number of years now, not in cages but in sectioned shed and outside flights but inevitably at some stage, breeders will try their hand at either these crosses or hybrids such as Goldfinch x Siskin, etc.. They are bred for the challenge of achieving it and the hope that an uncommon colour type emerges and of course, the beautiful song of the cock birds. Unfortunately the offspring of both mules and hybrids are almost always sterile and so cannot breed on and so where hens are bred and also cannot sing, they do tend to be surplus to requirements.
It's not unknown for some breeders to release these surplus hens into the wild rather than cull them and I often chuckle to think of what some birdwatchers would make of it, coming across a bird such as the above, sitting in a bush somewhere. Probably most would guess what it was but I wonder if some would try and turn it into some new rare bird, as they do, "channel wagtail comes to mind.

I had an hour on the reserve this morning, stopping at the Raptor Viewing Mound as I went by, to speak to an RSPB group who were assembling for a walk around the reserve and Shellness. They had a leader and I left them to it after giving a bit of info. on where the birds might be found. But walking across the grazing marsh this morning was a bit of an ordeal in a bitter cold E. wind coming straight in off the North Sea, which became even worse when there was a 20 min. horizontal, heavy shower of rain and sleet.
Posted by Derek Faulkner at 11:39