After the beautiful day's weather that we had on Christmas Day - weather wasted for those who had to endure being stuck indoors being Christmasy, although not me, we have had three days of greyness, gloomyness and dampness, though not rain.
I have been on the reserve around dawn on every morning, dawn that rarely shows much light before 07.15. I've been going at, or just before dawn, for several reasons, the first being that I rarely get up later than around 05.30 in the morning and the first chinks of light not showing until around 07.00 finds me getting very impatient indoors.
A couple of weeks ago a new Marsh Harrier night-time roost was found in the the dense reed beds alongside the sea wall, with up to sixteen birds being seen to leave there at very first light in the morning. Unfortunately my pre-dawn visits over the last three days have come up blank, the birds appear to have moved somewhere else at the moment. There are still several of them to be seem flying around the reserve every day but not to/from the roost it seems.
The Christmas holiday period, with many companies shutting down for a couple of weeks, means that the wildfowlers that shoot the saltings in front of the reserve tend to be more frequent with their visits than during the rest of the winter season.  Slowly, as the reserve begins to wetten up much quicker this winter after two previous drought winters, so the wildfowl are beginning to use the reserve again. This has therefore seen more shooting going on around, and just after, dawn, as the birds fly out to the nearby tide and over the wildfowlers. However, chatting with them as they pack up and from what I've witnessed, there may be a lot of shots being fired but very few birds are being killed. I rather suspect that this is due to poor skills and in one or two cases that I've seen, shooting at birds too far out of range. But the wildfowlers are a hardy and mostly friendly bunch and I always make a point of chatting with them as they pack up, the shooting that goes on there now is minuscule compared to how it used to be twenty-odd years ago.
I've had a few chats with birdwatchers as well while wandering round over the last few days and have enjoyed the fact that both they and the wildfowlers have failed to speak ill of each other, they seem to accept what each other does and leave it at that.
And so this year draws to and end. It basically began with the "Beast from the East" spell of Siberian weather, went through the glorious mid-summer heatwave (please can we have another next year), is ending in increasingly perfect wetland reserve conditions and I'm into my 32nd year as a Volunteer Warden on the reserve - I guess that allows me to say that I know a bit about the place.

I've ended with two wildfowlers and their dog making their way back along the top of the sea wall in the gloom of the early morning. 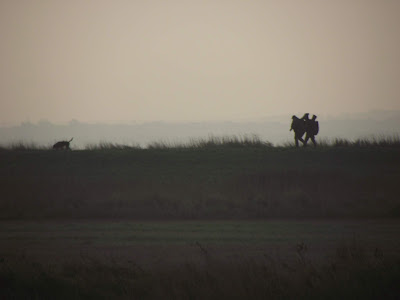