A Bit of Snow at the Point

This morning Midge and I drove out to Shellness and walked out to the Point to have a look at the high-tide roost. The weather was a far cry from the last time that I was out there several weeks ago, watching a film crew on a hot and sunny day. Today it was grey, chilly, gloomy and damp and never really got properly light - and to think that when it was warm and sunny a few weeks ago some birdwatchers were complaining and hoping for this wintry weather, to better the bird watching - takes all sorts I suppose, I know which I prefer!
Anchored on the tide and fairly close to the Point were a total of eight vessels of varying sizes, all to do with the cable laying operation that is going on between the wind turbines out to sea and the new receiving station on the mainland at Graveney. This is the biggest of them, which is a lot bigger than it looks in this photo and of a night has so many lights on that it illuminates the beach at Shellness. 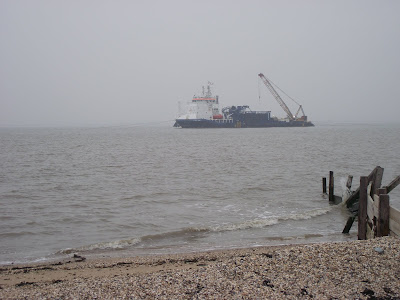 A second vessel was anchored close to the Point, looking ghostly in the gloom. The dark area on the beach of the Point is around 900 Oystercatchers and 400 Dunlin that were roosting there, so it would appear that the vessels are not disturbing the roost very much.
I followed the path out to the beach at the very tip of Shellness, careful that Midge and I never disturbed the wader roost and faced into the bay there. Almost immediately I heard the familiar and budgie-like twittering of Snow Buntings and just along the beach of cockle shells there were indeed 9 Snow Buntings busily looking for seeds. Unfortunately the light and the range were just a bit too much for my little camera to take photos.
In all along the beach of Shellness Point this morning I had a total of 900 Oystercatcher - 400 Dunlin - 5 Cormorant - 12 Knot - 50 Turnstone - 4 Grey Plover - 70 Brent Geese - 9 Great Black Backed Gulls and the 9 Snow Buntings. On the saltings alongside I also had 8 Little Egrets. 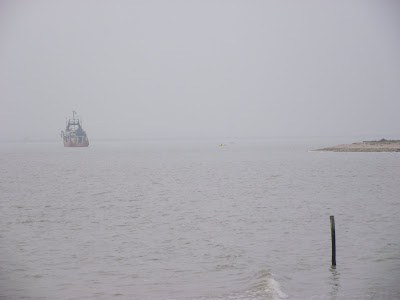 And one last surprise for the time of year, was this specimen of Vipers Bugloss still in flower. 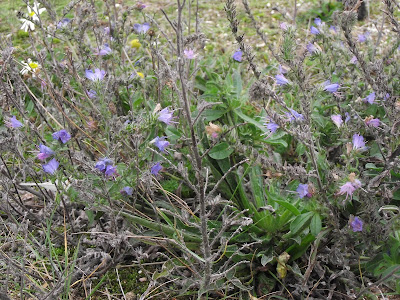