Despite getting up as usual just after 5.30 this morning, I hadn't planned to visit the reserve today but a glance out of the window just after 6.00 showed a starlit sky - could we really be looking at a gloom free dawn, too good to be missed, I was off!
The view below was taken over the reserve's barn just as I arrived, a spectacular sight as the light began to increase. 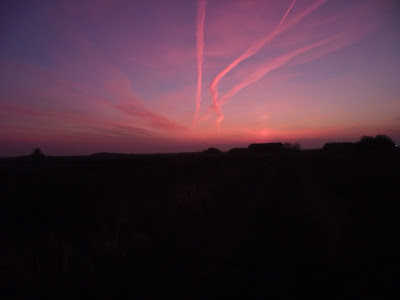 Getting up onto the sea wall this was the dawn view looking across The Swale towards Seasalter. 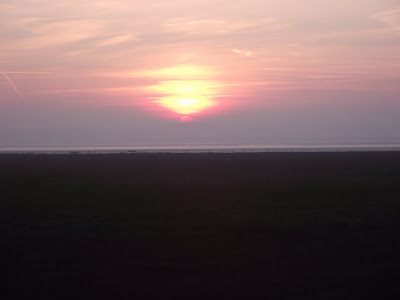 At first there wasn't a lot of bird activity, a look across the fields to the Shellness track proved that the Rough-legged Buzzard does seem to have moved on and only a couple of Marsh Harriers were gliding low along the sea wall.
However as I made my way across one of the reserve's grazing fields I suddenly hit apon a remarkable treble of birds. Standing in the grass just twenty yards away were five Short-eared Owls, all bunched together shoulder to shoulder. I wondered if they'd roosted overnight like this or were just discussing breakfast, but whatever, they didn't hang around and rose up and began to lazily disperse. As they did, a Great White Egret flew low across the field directly above them and eventually dropped into the Delph fleet alongside the sea wall, where it was yesterday.
I was well chuffed but it hadn't finished yet, just a hundred yards further on a Lapland Bunting flew overhead calling repeatedly - trebles like that don't happen too often and coupled with a beautiful November morning of blue skies and sunshine, it was one to remember. The true essence of simple, solitary bird watching on the same, regular patch and getting the maximum enjoyment from it.
I moved on and with the sun rising higher in the sky it lit up the cattle contentedly grazing in the dewy fields, emphasising that lovely, desolate nature of the marshes that I love so much. 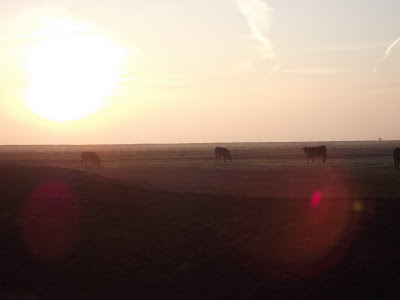 Some even came to say hello. 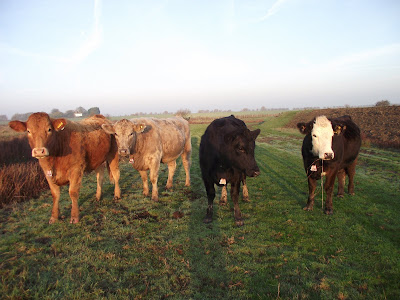 I was only out for an hour and a half, but what a glorious way to start a day and rounded off back at the barn by three Long-tailed Tits working through the willow trees.
Posted by Derek Faulkner at 10:05