I found this photo in an old album the other day. It is my good self in early Spring 1963 and just approaching my 16th birthday. It'll be of no particular interest to readers of this blog except I was sitting on part of an old building that stood where the Raptor Viewing Mound now stands. Look carefully and you can see Capel Fleet in the background, running north east towards Leysdown. I haven't a clue what the building was, or had been, all I know is that a friend and I cycled out to Harty that day from Sheerness and we took some photos. It'd be nice to say that even at fifteen I had just seen Sheppey's first Marsh Harrier or something, but I'd be lying, I was simply having a look round Harty and anyway, within a year or two I'd become a bit of a long-haired beatnik and birds took a back seat for a few years. 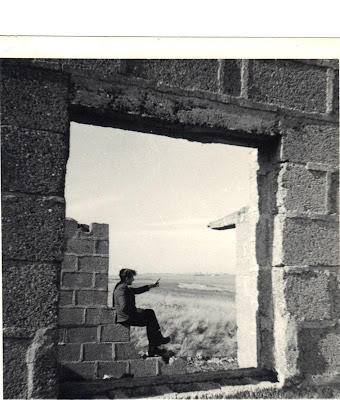 I bumped into another couple of really nice birdwatchers this morning as I left the reserve, well I say bumped into but what I mean is, as I suggested in yesterday's blog, I made a point of stopping and chatting with them rather than being some person disappearing into the distance. I believe that they were a father and son and early in our conversation they told me that they came from London and were avid fans of my blog - cue for a long and pleasant chat with my fans - such nice and sensible people!
The trouble with all this new interaction with passing bird watchers is that I'm beginning to feel that I should know more than what I do. While I can talk for hours about Sheppey's countryside, its wildlife and its history, I've always been a bit of a lazy birdwatcher and despite watching them for fifty-odd years and having a pretty good knowledge of them, I've never bothered with the finer points. Take a Rough-legged Buzzard for instance, I find people asking me for example, was it a second winter, or third winter bird - gawd! I haven't a clue, its just a Rough-legged Buzzard as far as I'm concerned!

To another subject now and I've made no secret over the last year of my change of attitude regarding wildfowling and my increasing friendship with many of them. Yet just as all this back slapping and adoration between each other is going on along the sea wall, along comes one of the shooting fraternity to kick me in the goolies and encourage my bird watching critics to say - I told you so!
This week in his regular column in the Shooting Times, a gamekeeper has made the suggestion, which has been building momentum for some time amongst the shooting fraternity, that Brent Geese should be put back on the shooting list. His reason for suggesting that - there's loads of them now and it'd be nice to be able to shoot some - what a pathetic reason and a load of crap! There's the shooting fraternity under attack from antis from all sides and they start suggesting something that will harden the attitude of even more people towards them. And if the simple arguement is, despite their protection, that there's lots of them, presumably they could argue the same case for shooting Shelduck.
Anyone that regularly watches Brent Geese around the coast will know full well that they fly low, fly slow, stay very close to the shoreline and are very confiding birds. A few wildfowlers sat on the edge of some saltings will easily be able to kill large numbers of these birds as they take advantage of the birds' non-fear of humans - and for why? I'm advised they're not pleasant to eat, so will we see them simply thrown away. Its also suggested that once shooting them begun that the birds would soon wisen up and become more wary and harder to shoot, really, and how many would be shot easily, before and if, that happens.

It's been an up and a down couple of days, tomorrow looks set fair, lets hope we get back on an even keel.
Posted by Derek Faulkner at 15:04