Growing up in Sheppey - Part 2

Part 2 - with apologies to those who have no links with the Sheerness of old.

Having described where I began life as a child in Sheerness, I'll try and describe some of the things that we got up to in those Unity Street days, before we moved houses when I was eleven, difficult at times because 60-odd years ago is a long time to remember things. In previous posts I have described how I gradually began to explore the fields and marshes just outside Sheerness but what did we do closer to home. There are also very few photos from those early years because cameras were certainly an item that didn't exist in our household, we could rarely afford to pay for the coal and had to hide indoors when the coal man came knocking for his money. The one below is the only one that I have that shows the austere surroundings that we lived in. It was taken in the back alley, outside our back gate and presumably by a neighbour as it features their daughter between  my sister and me, aged around eight or nine in my Delamark Road School cap, and jumper knitted by my mother. 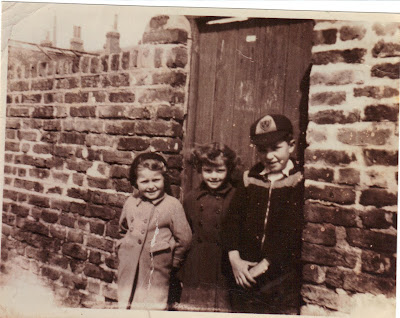 My first encounter with school came at the age of five, which was the normal school starting age in those days when mothers rarely worked. I don't know if I had been primed for the fact that school was about to happen but I do recall that first morning in September 1952. My mother led me up Telescope Alley nearby and left me in the Alexandra Road infants school playground, full of children of all ages that I had never seen before. After five years of rarely being away from the security of my house and my mother I was petrified and beat a hasty retreat back home, where, shortly after, my mother found me cowering in the garden. Unfortunately I was then dragged back up the alley, crying, screaming and shaking and left in the fortunately comforting hands of a school mistress. That then, also fortunately, saw me begin a very happy relationship with school life, I loved every minute of it right up to the time that I left at 15 and went out to work.
By the way, the fore-mentioned Telescope Alley, which is still there today, was one long alley that crossed the ends of several streets. It began at the bottom of Unity Street, opposite the now defunct ambulance station, and ran across the bottom of Clyde, James and Alma Streets before emerging on Marine Parade opposite the sea wall. What I do remember is the fact that the Heights of Alma pub was/is, on the corner of Alma Street and the alley, just a couple of yards from the infant school playground wall. This meant that if we came out of the school at lunch time we were able to look into the open door of the pub's bar as we went past. These days the school is still there but in private hands as flats or something.

My father worked at the Canning town Glass Works in Queenborough, the "Bottle Works" as it was known locally. He never owned a car and so like the majority of working men in those days, he cycled to work through all weathers to carry out the weekly cycle of shift work, 6-2, 2-10 and nightwork. The route took him through Sheerness and up the then unmade New Road to the Westminster rail crossing opposite the Gas works. Having pushed his bike across there he would then ride it through Westminster village, up the Whiteway Road into Queenborough and down the Rushenden Road into the works. When he wasn't working he liked his daily pint in one of two pubs close to our house. The first was ridiculously close, with it's rear entrance literally just across the alley, The Blacksmiths Arms in Clyde Street. When my mother visited her family in Ramsgate I spent many a late night in the back kitchen of that pub, listening to the radio while my father had his pints in the bar. When that pub eventually fell out of favour, he moved his allegiance to the British Admiral, a couple of streets away in James Street, where once again I would sometimes find myself spending a lonely hour or two sitting in the Jug and Bottle section with a large arrowroot biscuit and a bottle of Vimto. Many pubs had a Jug and Bottle in those days. It was usually a tiny bar with it's own outside door that people would go into in order to buy some beer and crisps to take away, either in bottled form or by having a jug brought from home filled up. I recall being sent round there myself as a young child to have a jug filled up for my father and returning home trying not to spill any of the foul smelling and tasting, foamy contents. How times have changed, imagine sending an eight year old child round to a pub these days to buy a couple of pints of draught ale and a packet of Woodbines!
Sadly, they are the most dominant memories of my father throughout my childhood, he worked very hard and he spent most of his leisure time at the pub, which I suppose was fairly common in those days, but he rarely did anything that was family-orientated.

Apart from exploring and playing in, the network of alleys that that were the arteries of the area in those days and not the cleanest of places, the one other place that was a major playground to us all, was the nearby beach and sea front. It was only three streets away and on foggy nights the fog horns were a constant sound as I lay in bed and thought about the ships out there in the darkness.
In those austere and pre-package holiday days of the 1950's, Sheerness sea front in the summer was guaranteed to be packed on warm and sunny days. We sometimes had picnics there with my mother and any visiting relatives but mostly, us children spent a lot of time there on own, taking an education in risks, accidents and exploration denied to most children of pre-eleven age these days. We swam in rough, cold seas, we rock-pooled, we dug bait, we collected winkles and cockles and on dark winter's nights we hung around the arcades looking for an opportunity to fiddle a penny or two from the machines. We roamed right along the sea front to the fairground at the far end of Sheerness where we watched enviously, people going on such exciting rides as the Big Wheel, the Ghost Train, the dodgems and my favourite, firing air rifles at targets. I remember falling over there one night and running home with blood pouring out of a fat lip and being told off for being that far from home but it never stopped me going.
Also along the sea front, there was a short jetty next to Ron Lodge's cafe where we would hang over the railings above the deep water with our hand fishing lines hoping that one day the bite on the end was something other than the non-stop catch of crabs. I think the most I ever achieved was a young "bootlace" eel that covered me in slime as I tried to untangle it.
Just so hard to imagine that we did all this as 8-9-10-11yr olds but we did and many, many things more and as a consequence got a very valuable start to later adult life.
Posted by Derek Faulkner at 09:39