Yesterday (Monday) was one of those rare days this winter where it didn't rain a single drop throughout a whole 24 hrs and not only that, it was wind free and fairly sunny - a small event but one for great celebration in this endless round of rain and flooding.
Most of the harrier roost counts took place on Sunday evening but I was unable to make that and so did mine yesterday evening. This wasn't a problem because mine normally consists of counting the few Hen Harriers that traditionally roost on the saltings close to Shellness Hamlet and so there isn't normally a case of counting some that were counted elsewhere the night before. Although water levels on the open fields of the reserve have receded a little now, there are still large areas of flood water in some of the fields, as this photo of the Flood Field in front of the Sea Wall hide shows. 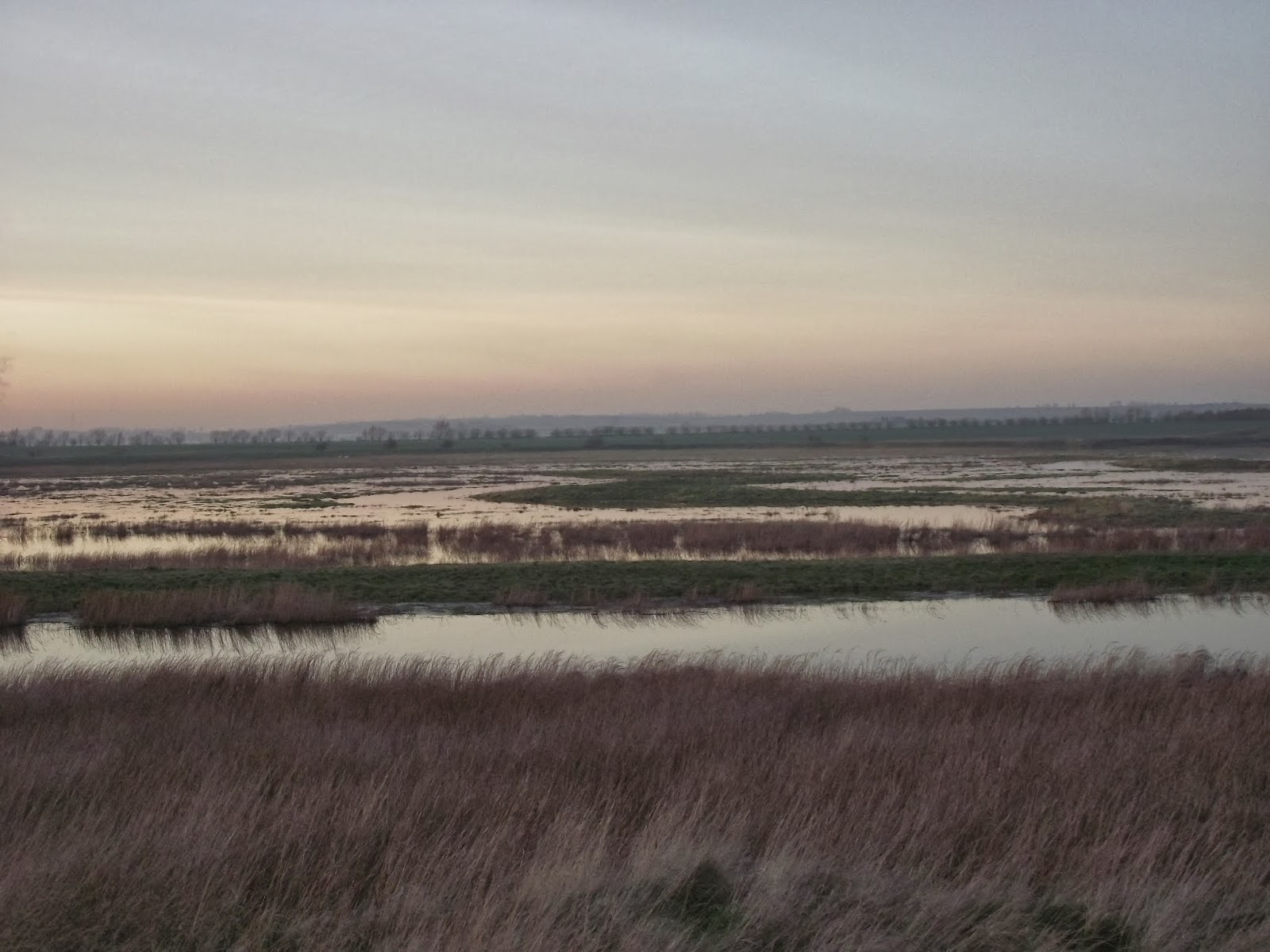 To get across to the sea wall and it's hide from the reserve barn, I had to cross the field alongside The Flood which wasn't as wet as that above but still involved a good degree of splashing through water and soft mud - OK in the daylight but not so good on the return journey in increasing darkness and rising mist. On getting on top of the sea wall I could see one of the local wildfowlers that I know, coming towards me with his three dogs and so I waited for him to catch me up for a chat. It was a very still late afternoon/early evening and with clear skies it was looking like he was going to have a wasted journey shooting wise - windy, cloudy conditions are more favourable, and so we stood talking on the sea wall together for the whole of my stay. 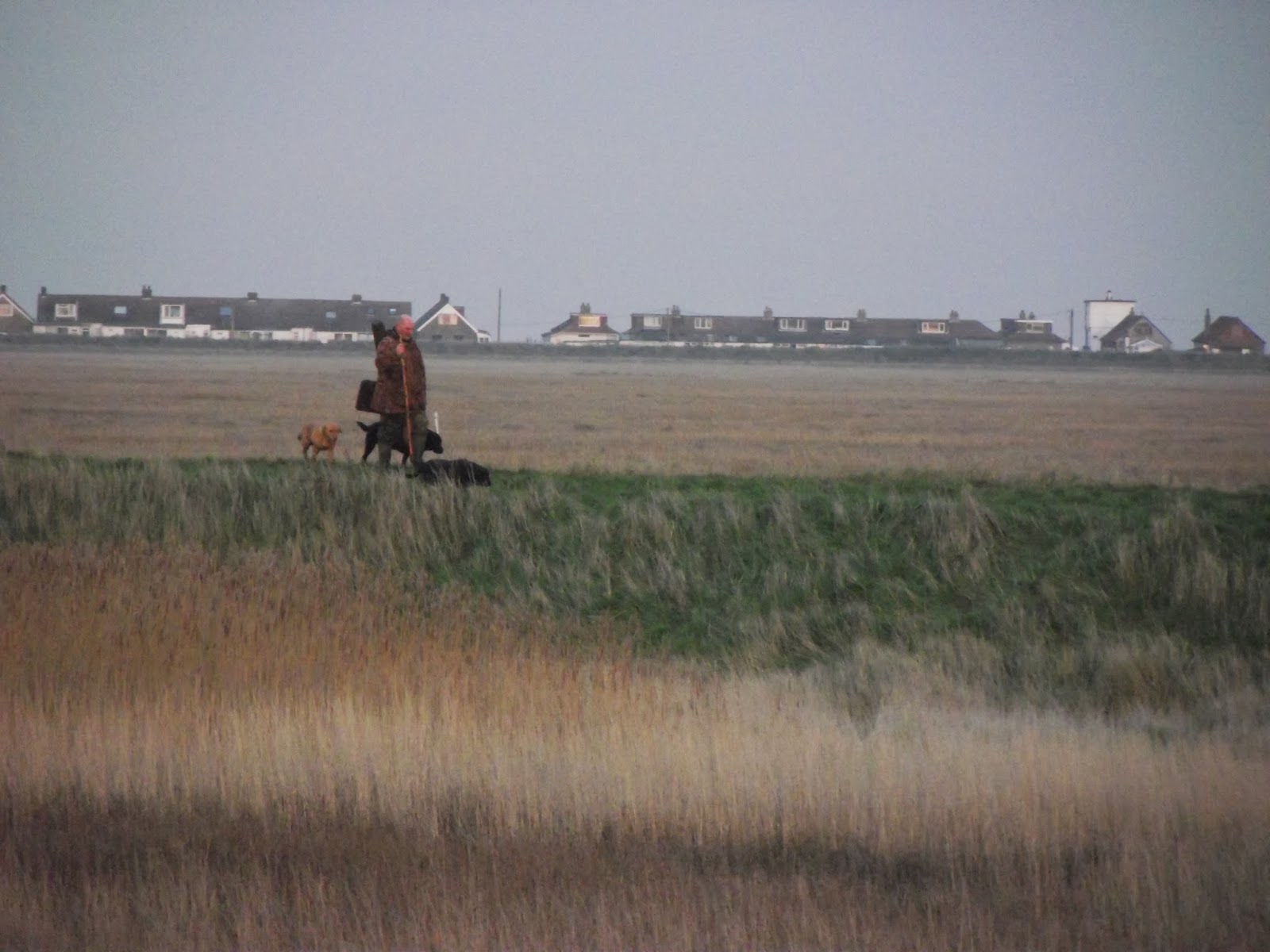 That's not to say that there weren't a lot of wildfowl about because there were and surprisingly, giving this winter's low counts there, a lot were ducks. They were out on a fast flowing and ebbing tide, half a mile or so across the saltings. My telescope brought in to view good numbers of mixed duck species, sitting on the tide and being carried speedily towards Shellness Point. The majority were Wigeon, Mallard and Shelduck but amongst them were also a few pairs of Pintail and Teal and they looked really picturesque on a glass calm sea with the first few wisps of mist just starting to rise from the saltings in front of them.  As we talked and in the space of another half an hour or so, the sea had receded enough for the mudflats to start to become exposed and with that came the mad rush of various waders as their huge flocks began to appear from all directions to hurriedly feed on the mud itself. Curlews began to leave their high-tide roost in the Flood Field and pass over us with their bubbling calls, rushing to join the other waders out on the mudflats before the dark settled in. Further down The Swale a noisy flock of Brent Geese that had been drifting past Horse Sands, now began to walk on to the top of the Sands as they became exposed by the dropping tide. It was a particularly magical evening and we commented several times on how colourful the setting sun had become as it began to drop below the skyline alongside Harty church. 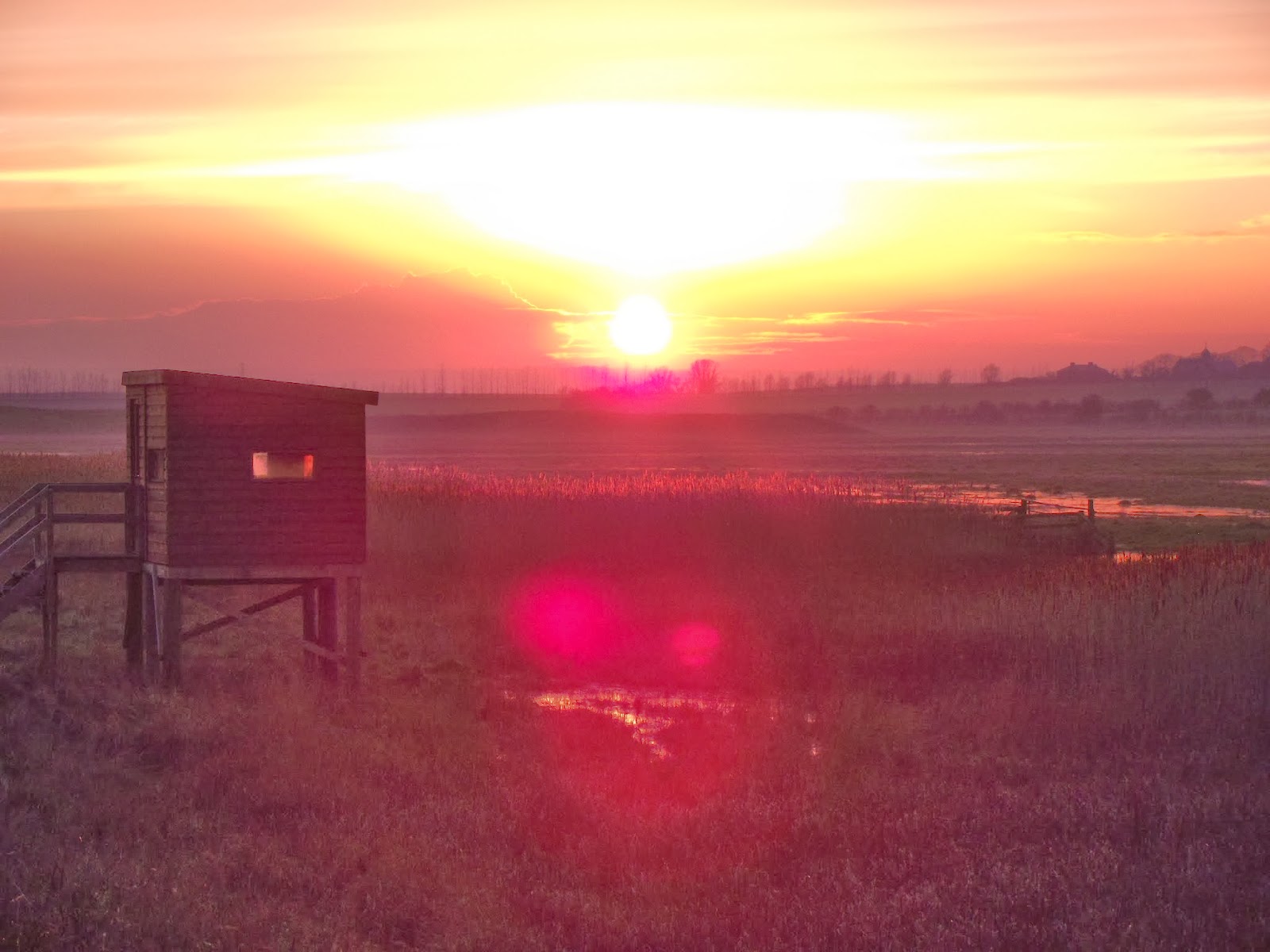 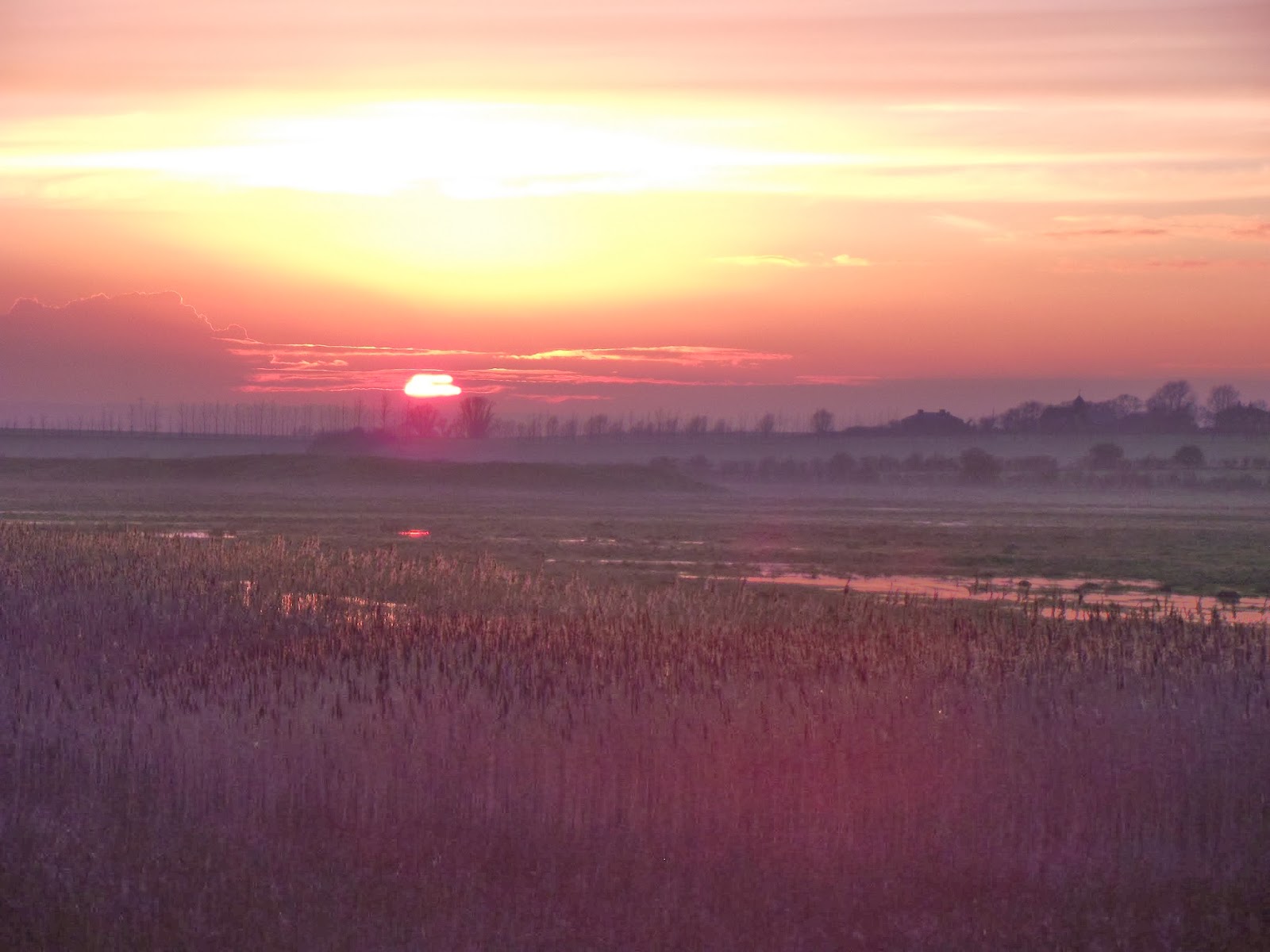 And then it was gone, leaving behind it the increasing cold of a potential frost and a mist beginning to rise from the marsh in the fast decreasing light. 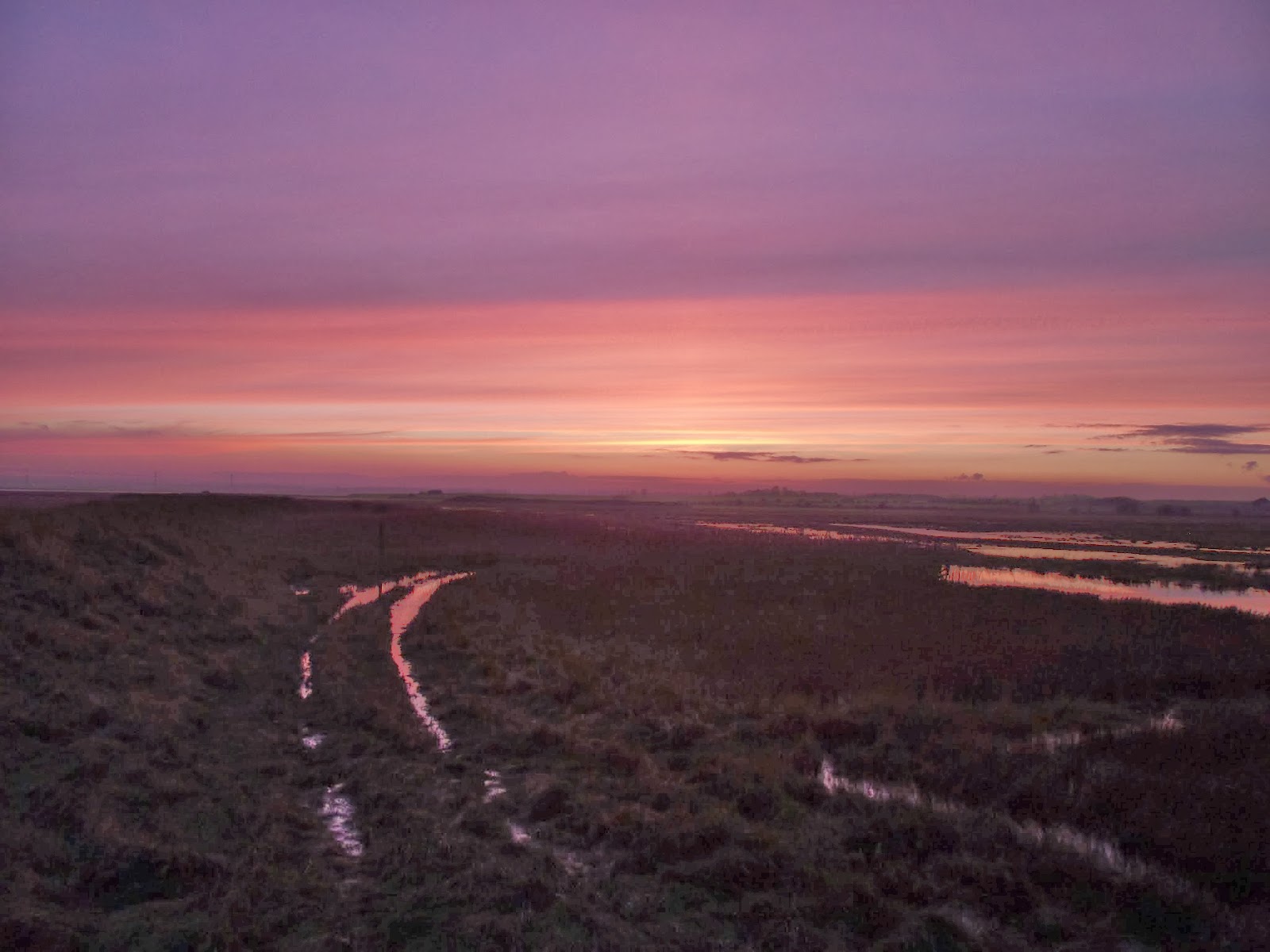 The photos don't really do justice to how beautiful and still and cold it was standing there surrounded by the calls of so many different types of birds as the darkness began to increase. In the Flood Field the resident flock of Greylag and White-fronted Geese had begun to become restless as the time for their final flight to their overnight roost became ever closer. The calls of the Whitefronts are magical at the best of times but in that setting they became really special and I suspect my wildfowler companion was looking at them with mixed feelings - how beautiful they sound/might I shoot one. 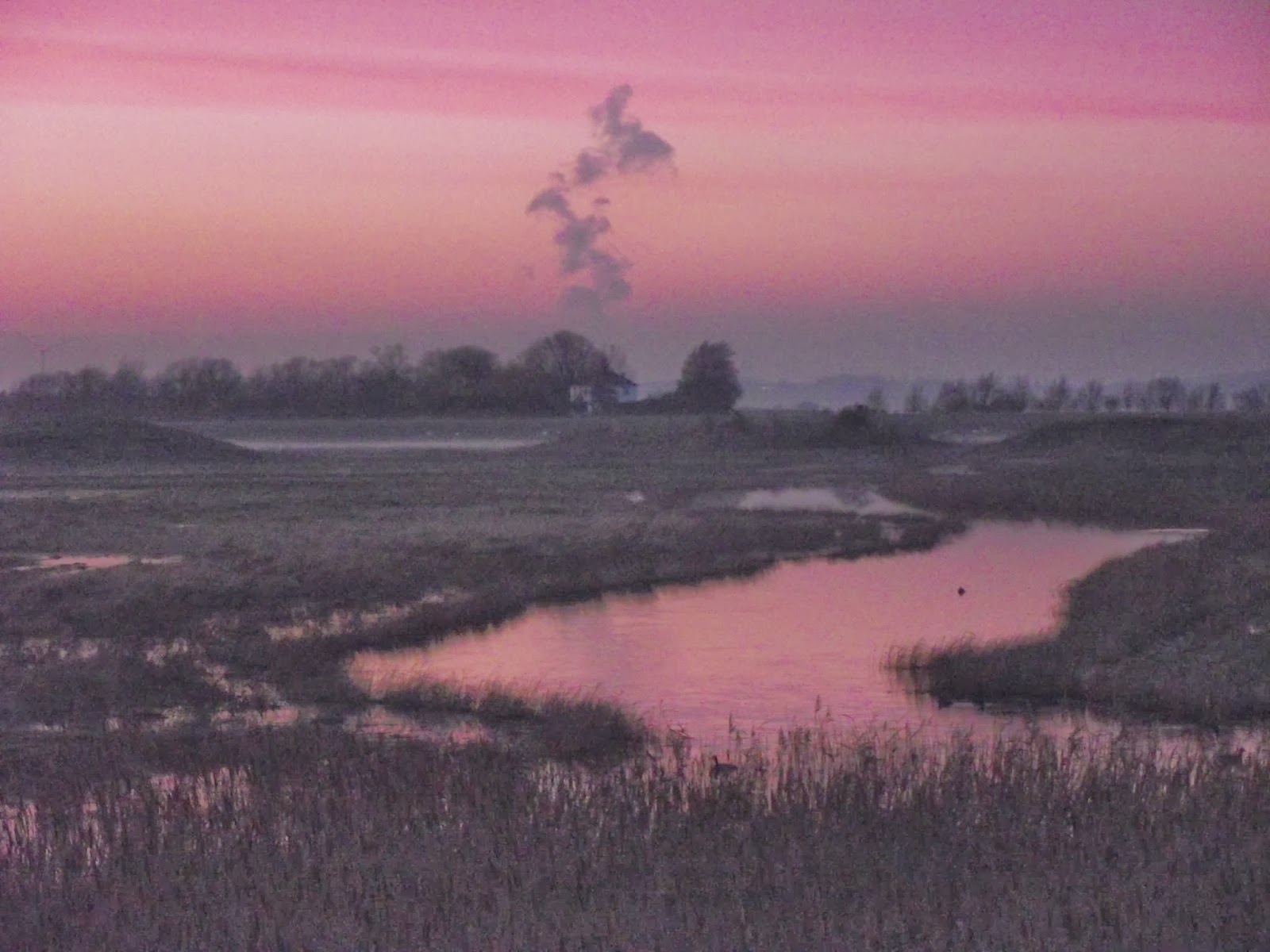 Had I recorded any Hen Harriers, no I hadn't and surprisingly no Marsh Harriers either. The only raptor that I saw while I was there was a female Merlin sat on a post out on the saltings. After three monthly counts this winter so far, no Hen Harriers have been seen going in to roost at Shellness, which probably reflects the dire state that Hen Harriers are now in in this country.
By then the rising mist over the saltings had risen to 2-3 feet high and it made seeing any birds out there impossible and so it was time to return back across the marsh. This was the view through the reed bed as I traversed the crossing over the Delph fleet by the sea wall and crossed on to the marsh behind. I left my wildfowler chum to spend a brief and half-hearted spell sitting out on the saltings getting damp and cold for probably no reward. 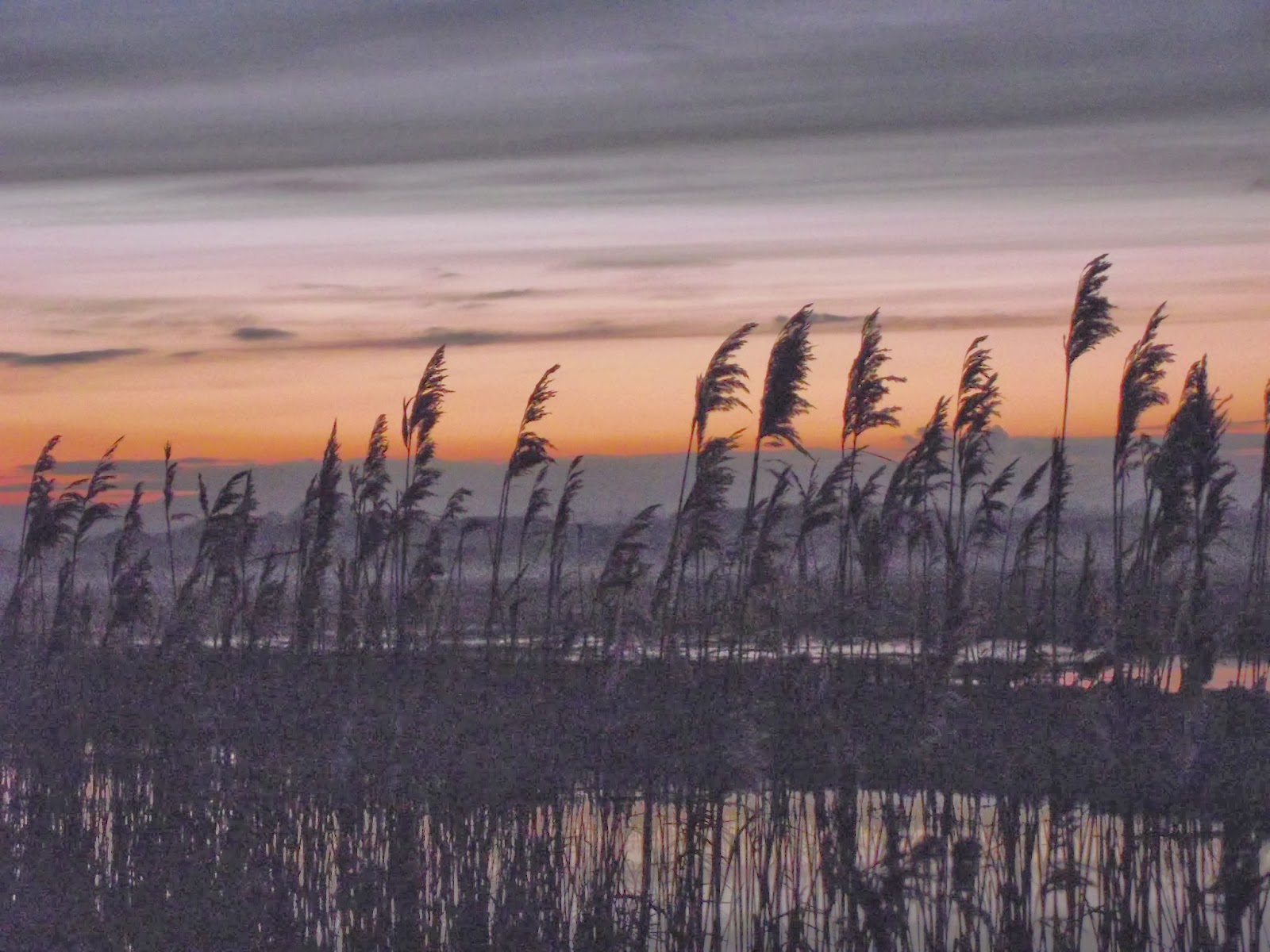