As I often do at the weekend in the winter, I left home pretty much in the dark, arriving at the reserve just as the dawn sky was colouring up over to the east. The first photo below which shows the reserve barn as I approached it to park up, somehow shows the light to be brighter than it actually was. 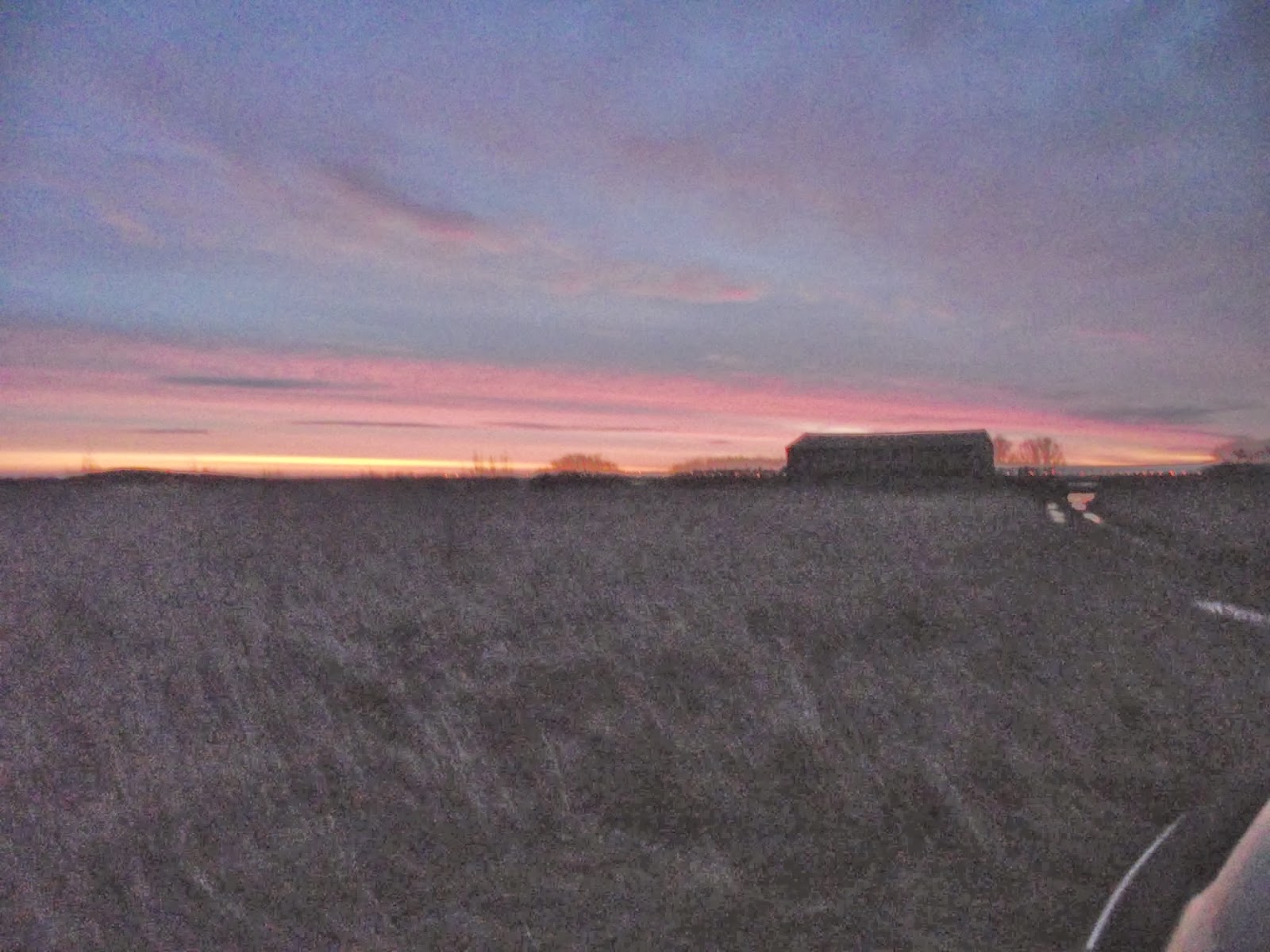 But as it did get lighter as the sun continued to rise below the horizon, so for a brief spell, the colours began to intensify. This photo shows my regular route across the grazing marsh to the distant speck pf the sea wall hide - some what wetter than some bloggers refer to as "very wet" in their areas! 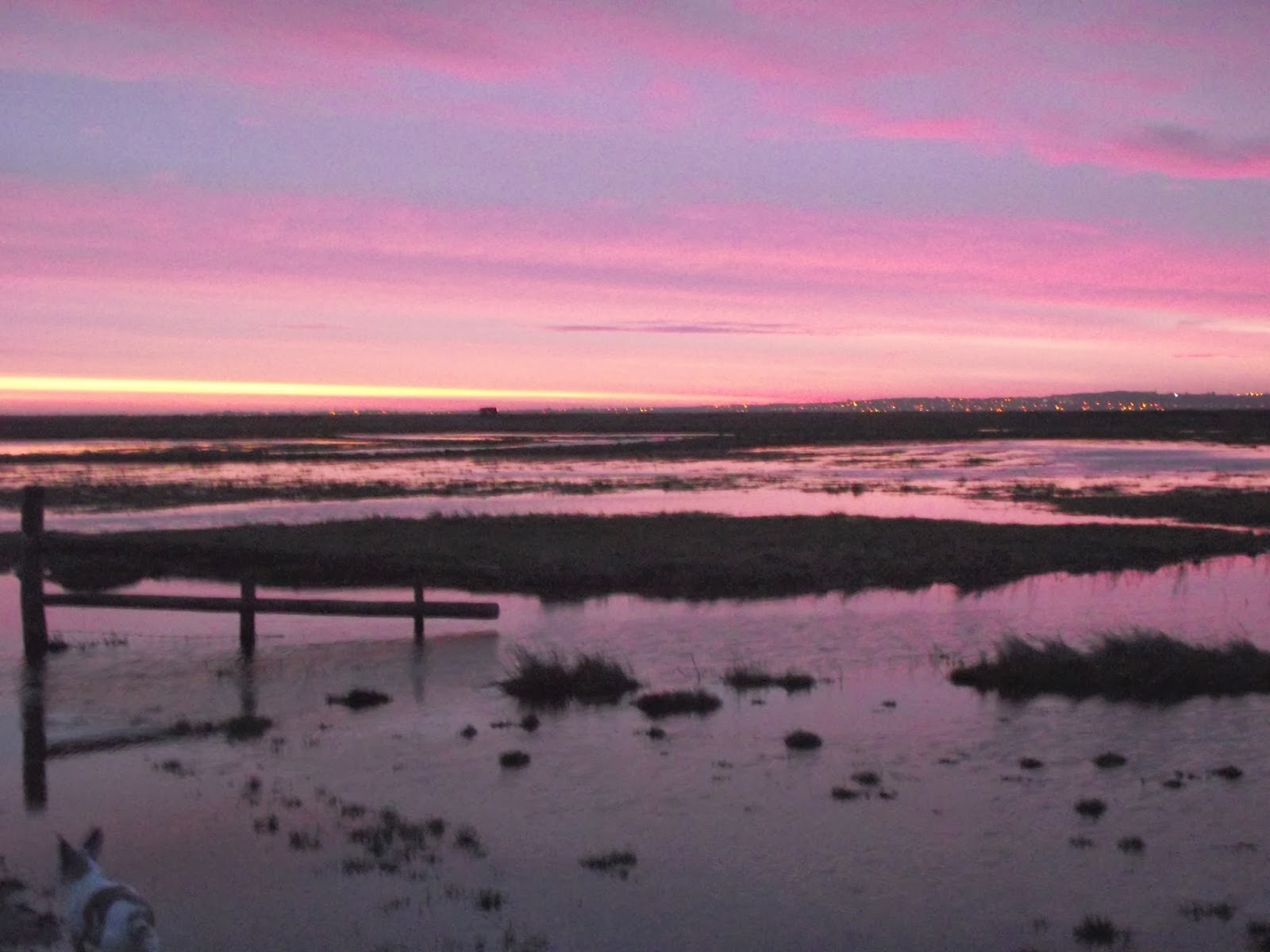 But being the heroes that we are, the dogs and I endured the water, the mud and the cold and as we did so, the colours in the sky intensified even more, and all with the constant calls of some 500+ geese close by - it was quite magical. 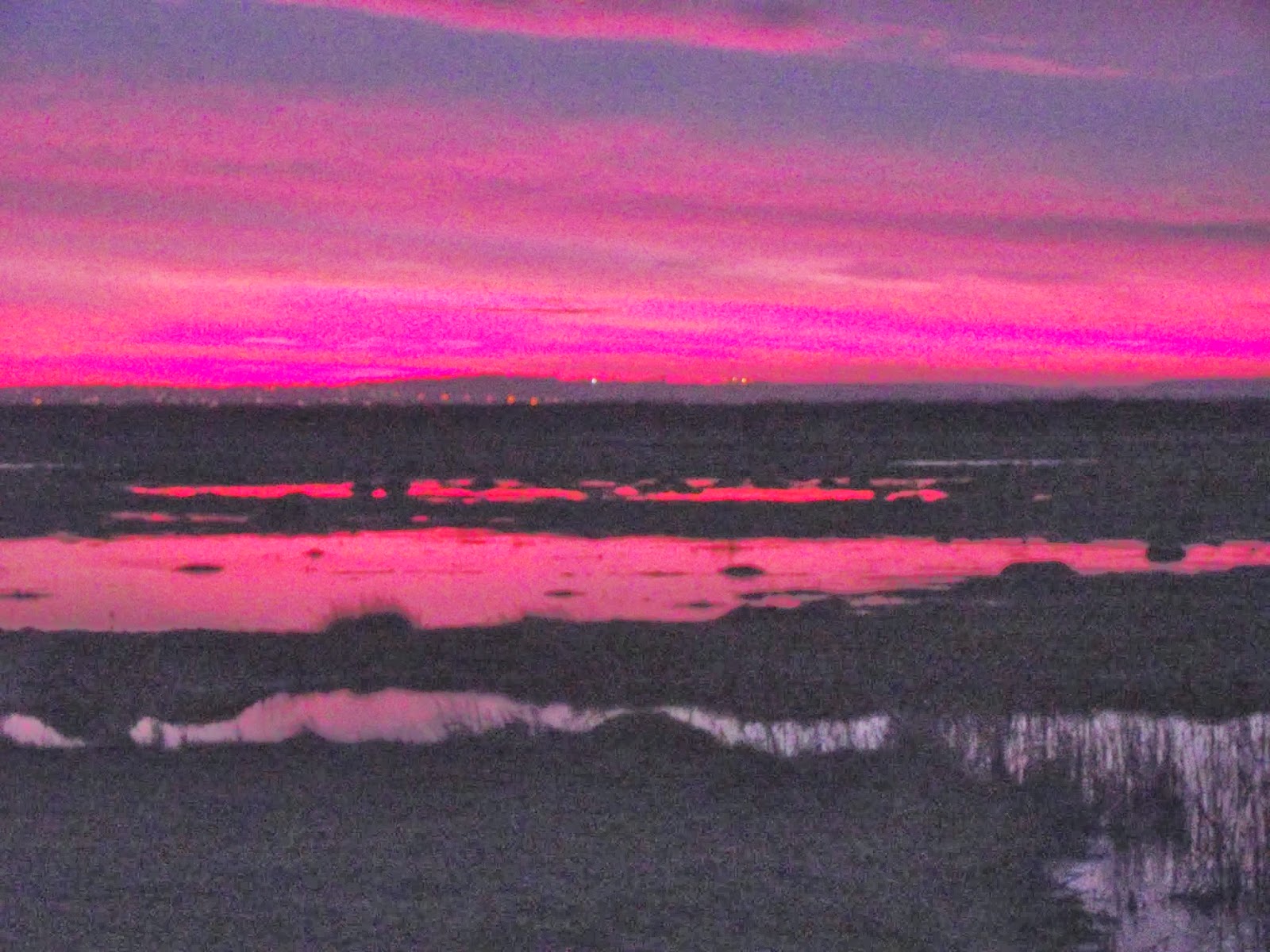 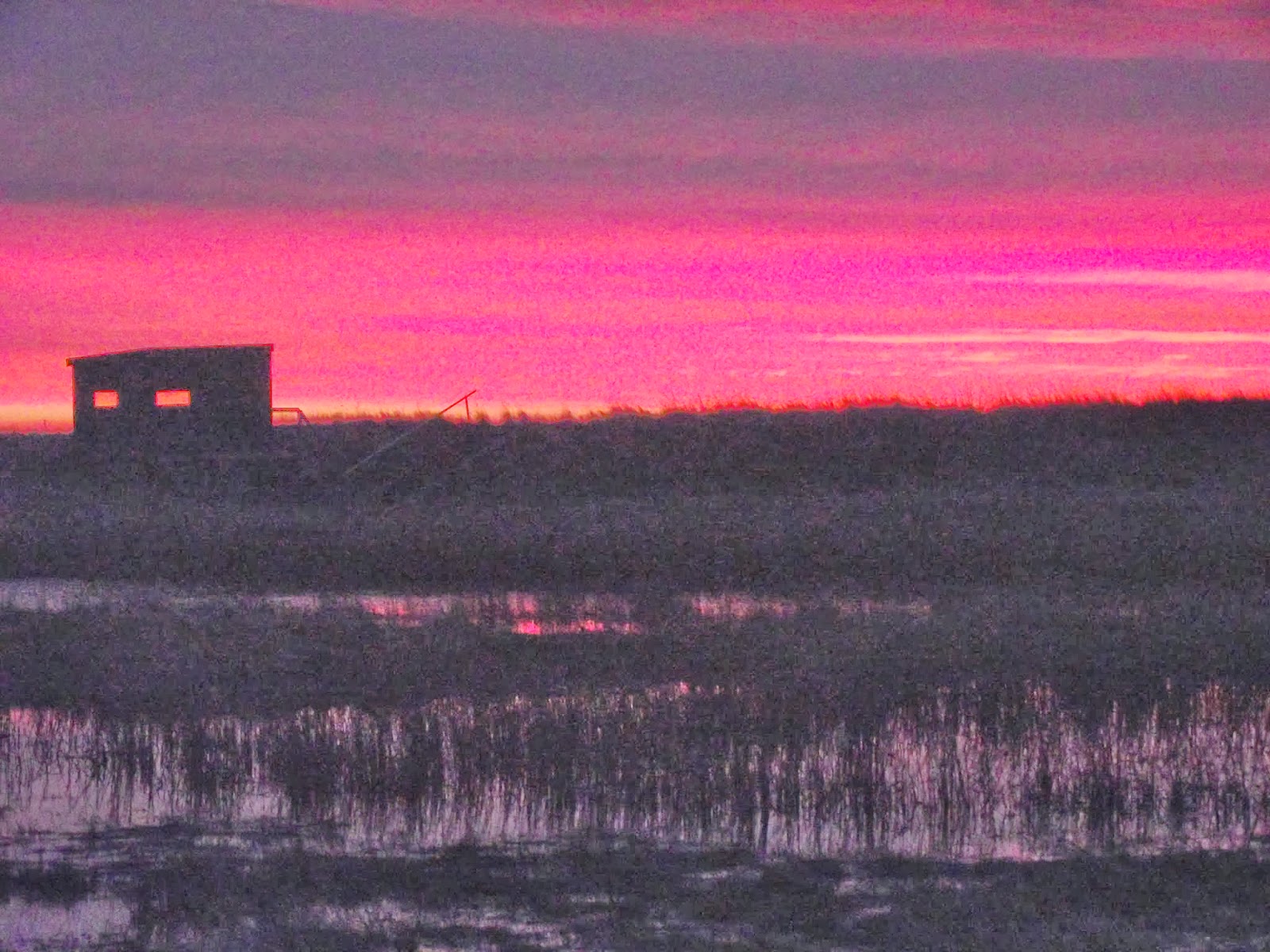 With my trousers rather wet around the top of my wellies I eventually reached the top of the sea wall and standing on the veranda of the hide, surveyed the immediate area. There were three Kent Wildfowlers on the saltings in front of the hide, the same three as were there yesterday at dawn, attracted no doubt by 500 odd geese flying around the reserve. As the light increased and light grey clouds began to blot out the earlier colours, the three wildfowlers eventually began to pack up and make their way back to the sea wall. Chatting to them it was clear that, despite all the geese about, they had had a repeat of yesterday's wildfowling, nil shots fired at anything. 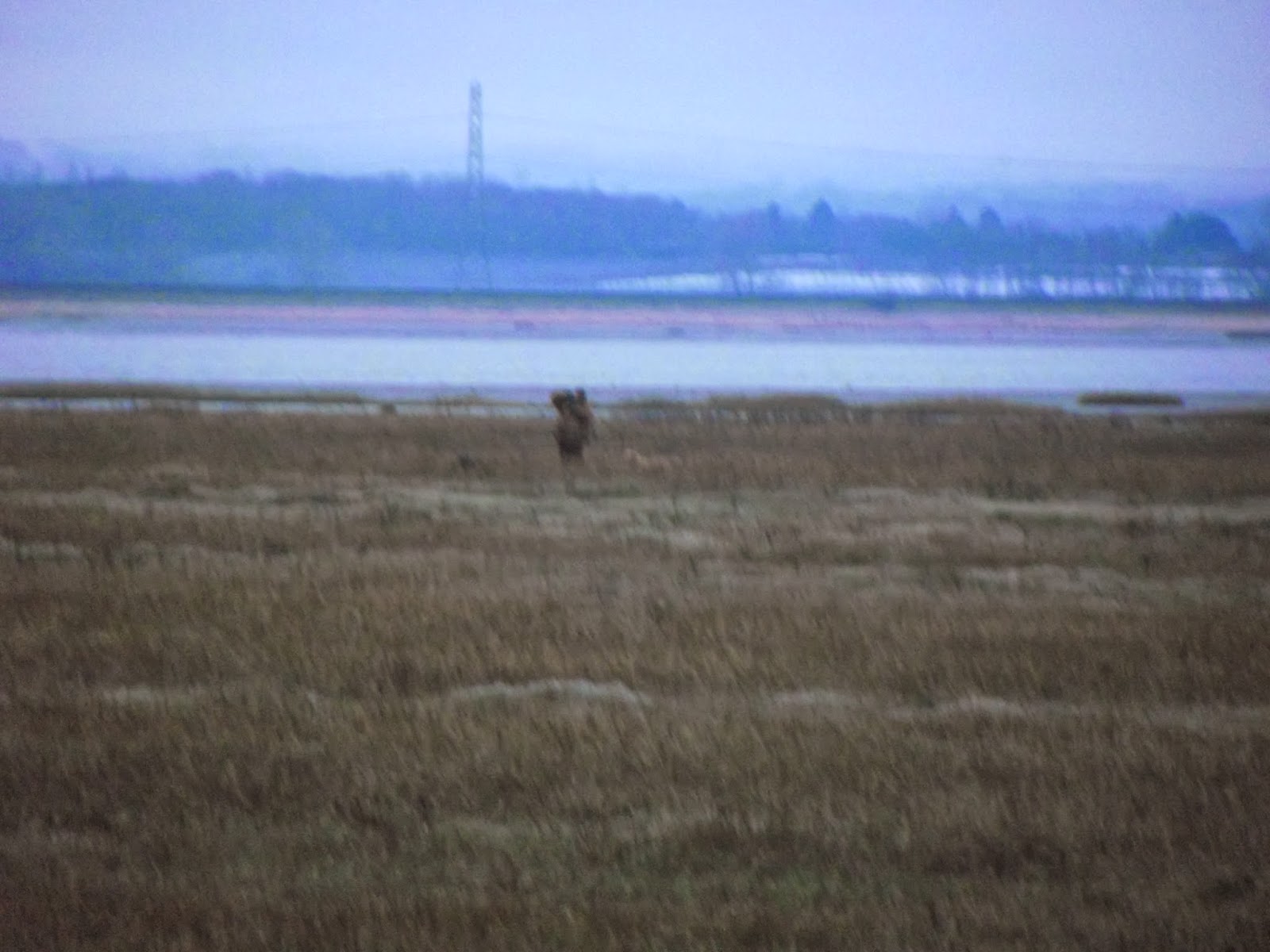 I left them to walk back to their cars and continued on my way round the reserve, trying to count the very mobile and spread out geese as I did so. Some White-fronted Geese continued to arrive, high in the sky from the north, throughout my walk but I eventually arrived at a count of 300 White-fronted Geese and 280 Greylag Geese. It is likely that the Whitefront numbers might have increased if more continued to arrive after I left but the sound of all those geese calling as they regularly got up, re-settled, or flew across towards the fields below Leysdown, was truly awesome.
Many of the geese make this flight to the fields below Leysdown regularly throughout the day, I don't know what the attraction is, perhaps the inland duck shooting syndicates are putting out corn to attract them. The inland duck shooting season ends this coming Friday night, which just leaves the wildfowlers with three weeks after that to continue shooting below the high water mark around the coast, i.e on the saltings in front of the reserve. Given the poor returns that these guys get for their efforts, their effect on the wildfowl will be negligible, it is the inland duck shooting syndicates on Harty over the next five days that offer the biggest danger to the geese, especially the Whitefronts. No doubt these syndicate members will be looking to get what they have paid for before the end of the season and will be intensifying their shooting over the next few days to that end. Unfortunately the geese appear to be sealing their own fate by preferring to fly in that direction. I have to admit that I'm not to bothered about the Greylags, which are little more than feral birds that need thinning out, but I would like to see the truly wild Whitefronts survive intact.
Posted by Derek Faulkner at 11:38