Growing up in Sheppey - Part 3

In 1958/9, I'm not sure of the actual year, we finally moved from our very basic surroundings in Unity Street to what seemed to us, the sheer luxury of a three bed-roomed, semi-detached council house in St. Agnes Gardens, Sheerness. By the time that we moved there were four of us children, with me as the eldest, and a fifth joined us not long after. 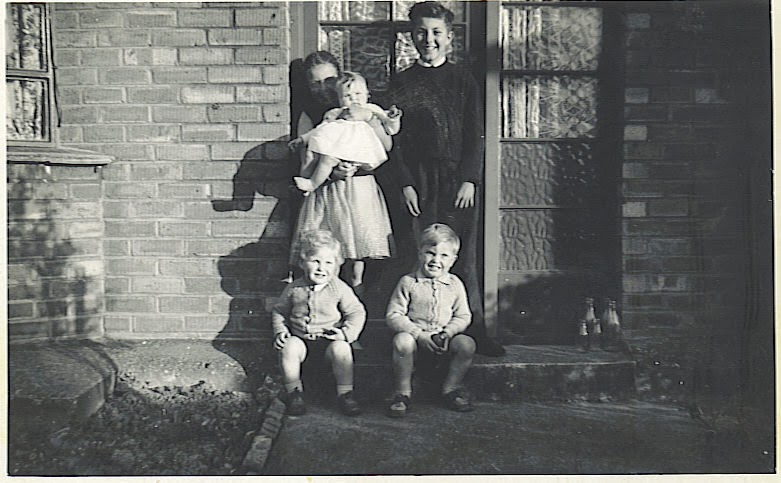 The houses weren't brand new but they were certainly modern and had everything we could dream of, including a large, although overgrown garden. It's hard these days, to describe the sensation of moving from a tiny house with one gas lamp and a cold tap to what we had gone to. Down stairs there was a hallway with an inside toilet, which led into a kitchen with cupboards and a sink with hot and cold water taps! The two other downstairs rooms were a front lounge and a back dining room, open to each other except for a half dividing wall that contained a coal fire in the lounge and a cooking range in the dining room. We never, ever used that range because we always had a gas cooker in the kitchen.
Up the wide stairs there were two large bedrooms and a small box bedroom and the one thing that meant the most to us all, a bathroom with a second toilet and a fitted bath with real hot water that came out at the turn of a tap. I must of been the cleanest boy in my class until the novelty wore off!
And then of course, there was that one last thing that I found truly amazing, being able to go into a room and light it up my flicking on a light switch, gaslight and candle light seemed another world away! Downstairs in the lounge there was a fascinating piece of decorating that had been created by the son of the previous owner. Each of the three and a half walls had all been painted from floor to ceiling to show the views out of a window in three directions. This meant that by sitting in the armchair you could look at a village cricket match taking place in one direction and a village street in another, it was was a clever and artistic piece of work but unfortunately my father didn't agree and soon had that covered in some pretty boring wallpaper.

Eventually, after we had been there a year or so, the next piece of wonderment arrived. My father had been to the local rental shop and a second hand, black and white television arrived. Imagine, in the space of a year we had gone from listening in the evenings to a wireless powered by an accumulator, to a real television - the whole outside world had come into our lounge at the flick of a switch!

Outside in the garden, there was much to do, grass to clear and vegetable beds to be dug but that came later. In the meantime I revelled in the wide-openness of our new world, the sun beamed down and into our house at last, there were large skies and no more the closed in and permanent shade of the narrow streets that we'd come from. The Sheerness canal and marshes were only a row of houses away and Skylarks sand and Marsh Frogs croaked all night, I could here them from my bedroom. In Vincent Gardens, a few hundred yards away, there was the large community of well kept Pre-fab houses to explore and just through a short alley, Southview Gardens, the one-sided road of houses that had across the road the grassy banks of the canal. I grew to know every inch of the canal, it's wide and shallow waters that dried up one drought summer and it's coots and moorhens and reed beds. The year that it dried up it went through the wet mud stage first and in that mud to the delight of us local kids, were hundreds of eels. We spent countless hours getting plastered in that foul smelling mud, with buckets and baths gradually filling with the eels that we scooped up and hoped to sell locally.

My father too had needed to find a pub close by and the nearest was The Nore, in St Georges Avenue and there he joined the darts team and spent the last ten years of his life before dying in 1969, aged just 50. The Nore was alongside the football ground of Sheppey United who still gave their address as Botany Road, the name before St. Georges, and whenever there was a home match the roar of the crowd and the referee's whistle could be heard quite clearly from our garden, a few streets away. I recall that if I was still up when my father came home after closing time at the pub, he would often let me share his favourite supper, cold pig's trotters and bread. I'm not sure that I could nibble round the toes and toe nails of those trotters these days but at the time they were normal and tasty food, just as toast and dripping was. We still had the traditional Sunday lunch time roast dinners in those days, cooked and eaten to the accompaniment on the radio of Jean Metcalf and Two-way Family Favourites, followed by the Billy Cotton Band Show. Part of the roast dinner was a suet pudding, cooked each week in the same old pudding cloth and tied up with string. Half of the pudding was sliced and put with our roast and the other half was saved as our "afters", and eaten with sugar, jam or treacle on it, no fancy yoghurts or cheesecakes in those days. Rice pudding with sultanas in it was another favourite "afters", with my sister and I fighting over who was going to have the brown skin off the top.
It was whole new world around us then but so many places have now gone. The pre-fabs were demolished and the site became half Old People's Home and half a grassed play area. The allotments between The Nore and Granville Road were built on. The Co-op supermarket in Victoria Street was eventually closed, as was the school Dental Clinic on the corner of the High street and Vincent Gardens, a real torture chamber of a place that was.

I had narrowly failed in the 11-plus and instead of the Sheerness Technical School, had ended up at the Boys Secondary School in Jefferson Road, the "Central" as it was known. I soon saw that as a blessing, it had a huge school sports field and only a wire fence through the playground separated us from the Girls Secondary School, something that was a major attraction as teenage hormones began to kick in. Hopefully those teenage years will become Part 4.