I was a tad amused to read in the Daily Telegraph today that because the BBC's Countryfile programme has become so popular, that the BBC is now commissioning a five day a week spin off to be called "Countryfile Diaries". Now there's no getting away from the fact that if you like your countryside presented to you in an English Tourist Board, Walt Disney manner, where no cute and fluffy things get killed and the presenters are attractive girls in shorts, then the programme will remain popular.
However, now that they are going to have more programme hours to fill, lets hope that they can now find time to show some real countryside events - shooting, hunting, fishing, ferreting, tying flies, making nets. Proper traditional, get your hands dirty stuff that still does happen in the real countryside. They could also have it presented by real country people with years of experience of their subject, who could talk about the countryside in the way that Jack Hargreaves did so well in his "Out of Town" series.
Somehow though, I rather expect that we will get more of the same format, where everybodies happy, nothing gets killed, the flowers always flower and the sun always shines.

Today has been a real beauty, clear blue skies, unbroken sunshine and some clean, cold air. It was so refreshing after the claggy and mild dampness, drizzle and gales of recent days. Being out on the marsh this morning was a real joy and a boost to the spirit. It was almost as if the weather was shrugging off yesterday's Shortest Day and giving us a taste of the Spring that is yet to come. It was good to see the flock of c.104 White-fronted Geese still happily feeding away on the lush, green grass in the Flood Field, their calls so much more musical than the farmyard honking of the Greylag variety. So far they appear to have evaded the shotguns that regularly wait on either side of the reserve for them, but they will come under intense pressure over the next two weeks as many wildfowlers and duck shooters have two weeks holiday.

Other than that it was a generally quiet day bird-wise, just the usual stuff, but it was nice to see that this brood of five swan cygnets, hatched on the reserve this year, have all survived OK so far. 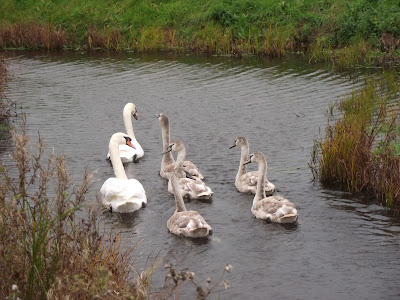