"There's real life for you.......the open road, the dusty highway, the heath, the common, the hedgerows, the rolling down! Camps, villages, towns, cities! Here today, up and off to somewhere else tomorrow!"

So spoke The Toad in the Wind in the Willows before his ill-fated caravan journey with Ratty and Mole.

6 o'clock on a Friday evening in the summer of 1966 and the landlord of the "Queens Head" public house in Sheerness is unbolting the doors to allow entry to four scruffy teenagers, each carrying a rolled sleeping bag encased in a black dustbin bag.
There was then nothing worse than being first into a cold and empty pub, just it's smell of cigarette smoke and spilt beer reminding you of how it might be later on, but never mind, these guys were on a mission. "Two pints of Stout and Mild and two pints of Light and Bitter" were ordered at the bar and soon carried to the old settee by the window. "So whose going first", was spoken and discussed between mouthfuls of best Courage beer. People passed by outside the window, it was a warm summer's evening, it wouldn't get dark until gone 10 o'clock that evening. "Well last time John went with Henry", said one, "this time it should be John and Del and Mick and Henry", "OK" was the answer, "so who's going first, we'll toss". John won the toss and he and Del would leave first.

It was the onset of one of our regular hitch-hiking trips to London - Mick, Henry, John and myself Derek (Del). We did this regularly during 1965/66 and 67, sometimes for a long weekend, sometimes for a week or more. Just the clothes that we stood up in, always denims, a sleeping bag and sometimes a guitar, though carrying the latter could be a pain in the arse and in my case one time, it got stolen. 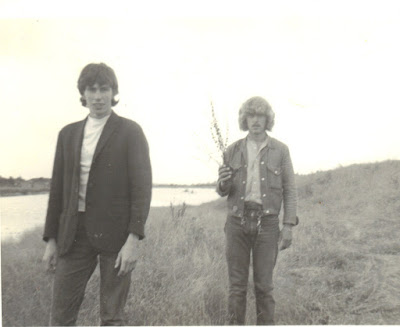 Above you can see both John and I - c.1966 (I'm on the right with a hair style that looked like a helmet, gawd).
So, the beers were drunk and John and I set out into the warmth of the early evening and began walking the several hundred yards to the "Canal", the waterway that formed the outer limit of the town. The Halfway Road then stretched ahead across the Sheerness marshes, until about a mile away it ran through the then small Halfway village. The "Canal" had never been a true canal, it was basically a wide stretch of water about three miles long, dug in Napoleonic times as a defensive moat that helped protect the army and naval sites in Sheerness from any enemy attacks.
We stood with our backs to the "Canal", watching clouds of mosquitoes swarming in the early evening sun and begun thumbing for lifts, it was an easy and regular practise in those days. We had two immediate targets, first to get a lift off of Sheppey, closer to or along the main roads leading to London, and to do so before the other two stood a chance of overtaking us. Mick and Henry meanwhile, stayed in the pub and ordered another round of beers, the two pairs always set off an hour apart, a bit of fun to see if the latter two could overtake those going first and reach the destination ahead of them.

Quite quickly we were offered our first lift, an oldish guy was going to Gillingham, we could hop in, a good start of about fifteen miles. The route that we was on was the old A2, the traditional road that had run from Dover to London for countless years and was heavily used in those days. The new M2 motorway had been recently built nearby but pedestrians couldn't walk along that and so we stuck with the A2 where we knew we could get lifts. Walking through the sprawl of the Medway Towns was never a pleasant option and so we hung around for a while at the outskirts of Gillingham until a lift was offered that took us well past the Towns and back out on to the open stretches of the A2. There the road was long and with countryside either side of it until the outer reaches of London began to appear and there for a while another lift failed to materialise. We found ourselves simply walking, backs to the on-coming traffic, thumbing as we walked, into the fast approaching dusk of that evening. After several of such hitch-hiking trips, we had become students, if that's the right word, of roadside debris. One of us would be thumbing while the other wandered along ahead picking up the various objects thrown or lost alongside the road, car wing mirrors, broken of in some collision, empty match boxes with all manner of different labels on. Even used condoms, which always prompted wild suggestions as to, why there? alongside a fast moving main road, but we never worked out the answer.

Anyway, it was never pleasant thumbing in the dark, the evening light, after walking several miles, was fading fast. After dark always seemed to bring out the idiots, which I suppose we could be classed as for being there in the first place. With our backs to on-coming traffic the first we became aware of a car too close was when it's wing mirror deliberately thumped an out-stretched hand to the merriment of the occupants. There were also the cars that sounded their horns and stopped several yards further on as though suggesting a lift and then as we ran towards it, would suddenly roar off again. We plodded on, at least it was a warm and dry evening, on a previous trip I'd had to walk, with no offer of a lift, for around ten miles in pouring rain and that's bad news for two reasons. Sympathy from motorists would easily disappear when they weighed up the thought of having two wet through, scruffy types sitting on their nice dry car seats, which then meant that we had to suffer climbing into sleeping bags somewhere, in wet clothes for a few hours very uncomfortable sleep. The second worst fate was to hear a car horn sounding madly and to see the other two's grinning faces pressed against a window as they sped past to overtake us.

But neither of those things happened that evening, another lift materialised and with the dark now descending fast we were dropped off at a place called Falconwood, not far from the outskirts of London. That small cluster of houses alongside the main road had been an overnight stopping off place a few times before for us, mainly because it had a great pub called "The Falcon". Buoyed by the idea of a last couple of beers for the night, we offered the motorist a drink, which he refused, and rushed inside, it was 10.30, half an hour's drinking time!  Twenty minutes later, as the landlord was about to shout "last orders" the door burst open and our other two friends rushed in, straight to the bar and ordered themselves some drinks. Apparently they'd picked up one lift, all the way from Sheerness to around five miles back down the road and had been walking as fast as possible with the pub as a magnet!
Beers drunk, there was nothing else left to do but walk into a large wood alongside the pub, unroll the sleeping bags, tomorrow the walk into London, tonight sleep with the squirrels and the mice. Hard to believe that just 3-4 hours earlier we had been sitting in the "Queens Head" on a warm and sunny evening.