Walking along the reserve seawall into a gale force southerly wind, gusting to 50mph early today, was bloody hard work, I felt like I'd run a half-marathon at the end of it. It was quite a bit chillier than yesterday as well but then yesterday morning was quite exceptional. Yesterday was very mild, sunny and wind free and there was I and three wildfowlers, walking along the seawall chatting, with a cloud of mosquitoes swarming round our heads and biting us, ridiculous for the end of December!
But back to this morning and the sun-rise across The Swale was soon lost as the gale pushed in heavy grey skies, reversing the early morning brightness for much of the day. 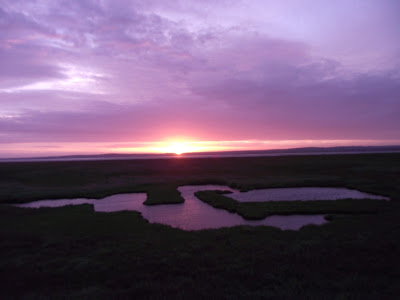 As I walked round the reserve, this mixed flock of Greylag, White-fronted and Brent Geese all got up from the grazing marsh and circled round before re-settling again. Fortunately, the only wildfowler out this morning had already packed up and gone, otherwise I wouldn't of risked disturbing the birds. 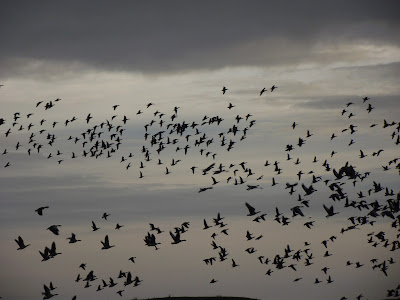 The geese still remain the best of the wildfowl numbers, with ducks still in very short supply. The wildfowlers were telling me that even at the first glimpses of dawn light, the only ducks going out to The Swale are just very small numbers each of both Wigeon and Teal.

And how about this for showing how crazy and mild this winter is, I took this photo this morning of a wild dog rose with a newly blossomed flower amid the winter hips. 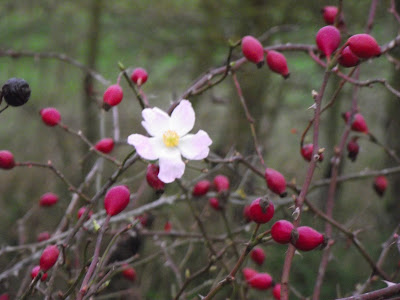 At last, our annual winter visitor the Hooded Crow has returned, a few weeks later than the average but at least it's back. We've had a single one each year for about ten years now, although whether it's the same bird is debatable and it always stays separate from the large flock of resident Carrion Crows, which makes it easier to find.
I had to go in the reserve barn this morning to get some rope to tie up a gate and was hoping to see at least one of the resident Barn Owls at roost, having not seen one out and about for a few weeks. Sadly, there were no owls present and only old, dry pellets, which indicated that it/them haven't been around for some time. They did this last winter but then returned to breed, so hopefully there isn't too much to fret about and we will see them back again.
This will be my last posting now until the New Year and just think, only around twelve weeks now until the first summer visitors start arriving.
Posted by Derek Faulkner at 13:46