Well, after the travels back in time to hippy hedonism of the 1960's, it's back to the far less exciting or energetic, current day. I must say I found writing those accounts of my life fifty years ago, very enjoyable. It involved much reading of old diaries, looking through old photograph albums and aided by the odd glass of red wine, lots of nostalgia.  Lots of memories are the only good thing about being old, there's bugger all else good about it.

So. for early risers such as myself, we're in that awful time of year where it gets light late and dark early, the daylight is so depressingly short. By 7.00 I've had my breakfast, read the paper and I'm pacing the house waiting for some reasonable daylight to appear.
Eventually I arrived at the reserve under some blue sky, which only lasted an hour before darker, grey skies flooded back in but it was very mild. The warm temperatures of recent days are certainly creating some unusual sights, yesterday, mid-December and I had a bumblebee feeding from primrose flowers in my garden, neither should be about until the Spring.
Over on the seawall, looking back across The Flood field, you can see that inch by inch we are now beginning to fill it up with water, we just need to get the two strips of water to join up and create one large body of water and it'll look quite good. But with the green areas quite waterlogged it is already starting to attract many wading birds when the high tides push them off the nearby mudflats. 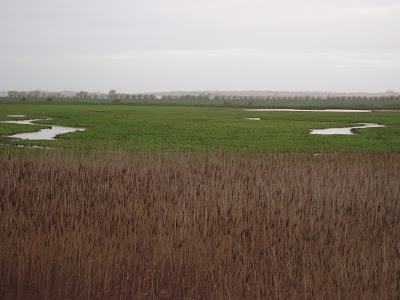 Something else that is increasing day by day is the flock of White-fronted Geese. Counts this last two weeks has since their numbers increase from 65 to 85 and this morning to 104. For true wild geese they are far less timid than you would expect and this morning I was able to circle round them at only 80yds distance as they fed on the grass in one of the grazing meadows. Unfortunately the reserve only offers them a narrow avenue of safety from harm, the wildfowlers are not far away just over the seawall and farmland duck shooters in the opposite direction. 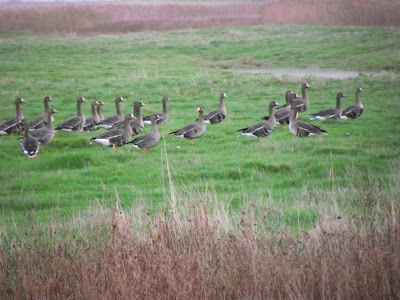 Other than that, there were very few other birds to be seen this morning, just the one's and two's of the usual species - Greylag and Brent Geese,  Marsh Harriers, Buzzards, Bearded Tits and a few Mallard and Teal. That was in contrast with the Monday just gone, when a team of three of us re-instated the monthly Wetland Bird Surveys (WEBS) on the reserve after a gap of two years. The WEBS counts are carried out nationally around the high tide and normally on the same day utilizing the fact that the high tide has pushed many birds off of the mudflats where they feed, up onto nearby beaches and farmland. Our co-ordinated count with the three of us having three separate counting stations, came up with some surprisingly good numbers of birds and a lot more than we have been used to seeing the recently.
Posted by Derek Faulkner at 16:06