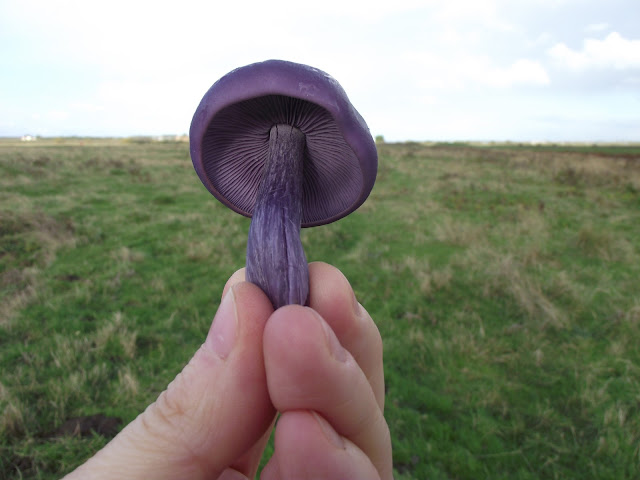 First off, crossing the reserve on Saturday morning I came across a tiny clump of this strikingly purple fungus. In 26 years on the reserve I've never seen it before and so I assume that it is a new arrival - but what is it, any ideas anyone, it's certainly quite spectacular.

October this year has been a really good month, we started it suffering with a drought on the reserve and are ending it with all the ditches, rills and scrapes nicely full, a sight not seen for several years. On the whole the temperatures have also been fairly warm as well and the combination of the two has seen everything growing away quite nicely and most of Harty looks quite superb at the moment. A couple of weeks ago, as I carried out the first Harrier Roost Count, I watched a tractor on the farmland alongside drilling winter wheat until well after dark. That same field today is fast turning green as the wheat shoots hastily force their way upwards before the first frosts arrive.
On a warm and sunny day such as today, everywhere looks and feels so good, both next year's rape and wheat crops are growing at a rate of knots and the reserve's cattle have an infinite supply of fresh grass on which to graze. This year as well, we've had quantities of mushrooms in the fields the like I haven't seen for some years, and so I've picked and eaten them, I've collected sloes and made sloe gin and I've picked and scattered rose hips and hawthorn haws along the seawall in the hope of starting off more bushes. We've has Jays on the farmland alongside the reserve, a rare treat, odd winter thrushes are starting to appear and very gradually the wildfowl are starting to increase in numbers. Its a good life on the reserve at the moment and hopefully November, with hopefully the addition of a few hard frosts, will continue in the same vein and then before we know it, the New Year and the dreams and hopes for 2013 will be apon us - can't wait!
Posted by Derek Faulkner at 16:19