Aha, we have water! 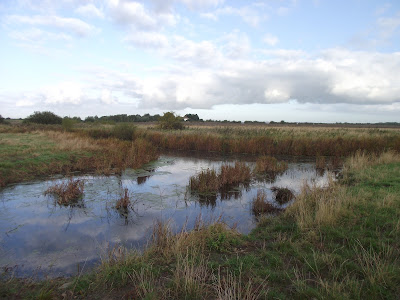 Wow, what a superb morning's weather on the reserve today, blue skies, very warm sun and no wind made it seem almost summery, it was a real joy to walk round out there.
That joy was heightened on seeing how much the water levels have increased since the overnight rain Friday into Saturday. The ditch above was half the width and two foot lower on Saturday morning but is now so full that it is flowing through a pipe under the track and re-filling a ditch alongside, as you can see below. 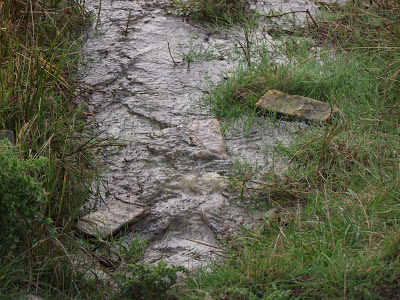 The reason, thanks to all that rain, is that the neighbouring arable fields all slope towards the reserve and over the last three days all their water has been draining into the ditch above which is inside the reserve's boundary. Even better, this ditch then naturally flows from west to east and has been, and still is, taking all that water through those parts of the reserve that need it most, filling up side ditches and some rills (below), on its way. 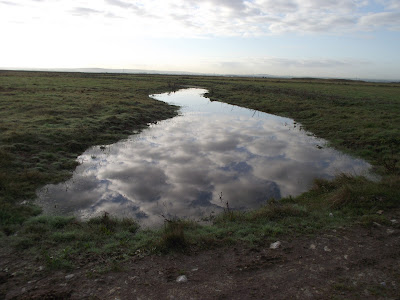 Even the "S bend ditch", about half a mile away (see below), has received this water and re-filled to the extent that it is over-flowing across a track alongside. It is the first October for several years that I can recall the "S bend ditch" having this amount of water in it and everything is looking really good for normal, if not wetter, levels of water on the reserve this winter. All we need now is the wetland birds to go with it, this morning's walk round the flat marsh produced just 20 Mallard, 8 Snipe,a Green Sandpiper and a couple of Herons from these wet areas.
Finches however seem to have had a good year and at present we are getting a flock of 150+ Linnets most days and this is often swollen by around 40-50 Greenfinches and the same amount of Goldfinches. Likewise Marsh Harriers seem to be showing wel lagain at the moment, I had six yesterday and five today, just a shame that the wetland birds don't like our wetland. 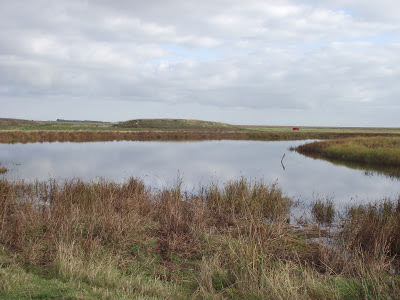 One last item concerning the reserve this morning, is the fellow below. The reserve's grazier has utilized a quiet corner of the reserve as the winter quarters for his five bulls and this Aberdeen Angus looked in fine fettle as I passed by yesterday as he kept a wary eye on me. Perhaps surprisingly, I have no fear of passing close to and being in the same field as these bulls but if they had been five horses there would of been no way I'd of been in there, horses scare me greatly. 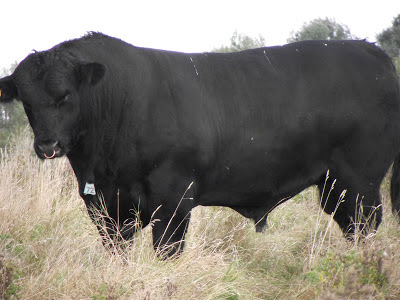 Whilst wandering round this morning on such an excellent morning for being out in the countryside, I mulled over the fact that over the last few days I have had a long chat with the farm next door's gamekeeper, a similar chat with a wildfowler on the seawall and even a brief chat with the Master of the fox hunt - but haven't seen or spoken to a single birdwatcher for some time. Perhaps those hunting types have a higher degree of optimism when looking for their quarry than birdwatchers and are prepared to put the time in. Perhaps its the early morning timescale or the fact that The Swale NNR just isn't fashionable in reserve terms these days.

One disappointing feature on the Harty farmland this autumn is the fact that the food strips round the arable fields have been ploughed in. I'm told that the farmer has come out of whatever scheme that it was that paid him to sow these strips each year with seed bearing plants that were attractive to finches and buntings. It'll be interesting to see if this has any effect on Corn Bunting numbers along the Harty Road, which in recent years in the winter has seen flocks of c.100+ birds feeding in these strips.