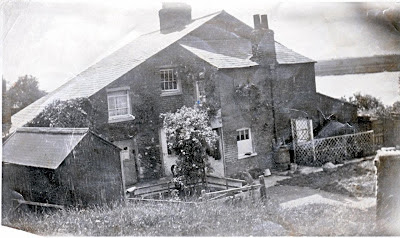 The area at Elmley known as "The Brickfields", lies just to the right of the small and rather mis-named Elmley Hills, and opposite the old Kemsley Mill jetty. I'm not sure how it got the "Brickfields" nick-name because I can find no record of any brick making happening but there was certainly a factory making cement there. Details have now been supplied to me that there was indeed a brick making industry there in the 1850's with many of the workers living in temporary dwellings.
Details of this factory, The Turkey Cement Works, I have written about before in a previous blog and so I will repeat very little of that other than to say that despite it being there for the latter half of the 1880's and into the first decade of the 1900's, all that is left of it's existence today is a small dock and to the right of it, the flooring and foundations of the factory. Perhaps the nick-name comes from the odd sections of brick wall that are still to be found in the grass there, the few remains of the various cottages that housed many of the factory workers there.
To get to the Brickfields you turn right at Kingshill Farm car park and follow the track along the line of trees towards and past the now derelict Elmley schoolhouse. Its impossible to go past the old schoolhouse without standing there for a moment and trying to visualise both it in it's hey-day and Elmley church that once stood a few yards away. Together, the two small buildings must of stood proudly, defying the windswept isolation to serve the cement works community and the out-lying farm cottages, but now sadly confined to history and sepia photographs.

But on you must walk, following the track towards it's end, towards the rusting framework of an old wind pump and the tidal Swale. Down past hayfields and reed-fringed ditches, past the heaps of old ragstones and there you are, finally among the ghosts of an old community that no longer exists. Go the edge of The Swale and find the factory's old dock with the rusting keels of two old vessels and standing with your back to it, look towards Elmley Hills and the old wind pump that once supplied the community's fresh water. The hills were once twice as long as they are now, but were reduced in length by a half in order to supply clay for the repair of some of Sheppey's seawalls in the 1960's. So ignore the artificially flat area in front of it now and imagine it's slopes being a few hundred yards closer to the old dock. And close to its base were two small terraces of cottages, the Globe Inn and Seaview Cottages.
On a warm and sunny day with nothing but an odd rabbit scampering around on the flat turf, its so hard to imagine the community and its cottages, gardens, shrubs and trees ever being there. Its made even more difficult by the lack of photographs as evidence, but we recently had a small breakthrough. My girlfriend Di Gardner has been researching her family history and several of her relatives used to live on Sheppey in the early 1900's. One in particular, was an Edwin Williams, who despite being employed as a cowkeeper for many years on the Elmley farm, lived with his family at Seaview Cottages, pretty much on the banks of The Swale at the foot of Elmley Hills.
But as I said before no photographs appeared to exist until by chance a few weeks ago, after visiting the Brickfields, we called in to see somebody who we felt could help us and various documents started to appear. There was a hand drawn map that showed the siting of the various buildings at the Brickfields in c.1900, although frustratingly without naming them, a kind of estate agent's description of various of the named buildings through the years, including Seaview Cottages, and even better, some photocopies of photographs named as of Seaview Cottages. One in particular, the one featured above, was a copy of one that Di Gardner had the original of from her father's collection and which had been unidentified until then. There were also a couple more that showed people in the garden of the same building and it was an exciting match for Di, not only to potentialy see where her relatives once lived at Elmley, but as far as we know, they are the only ones of any of the cement works community buildings.

Looking at the old black and white photo above we were intrigued and so recently visited the site to at least try and identify where the building once stood, and came to the conclusion photographed below. The old hand-drawn map clearly showed a building of the same shape at that spot and the other clincher might possibly be a bit of wistful thinking. The extreme right of the original photo shows some shrubs lower down by the edge of The Swale and our visit found some old tamarix and willow shrubs in exactly the same place, could they be the originals and a hundred odd years old, who knows, but there doesn't seem any other reason for them being there. 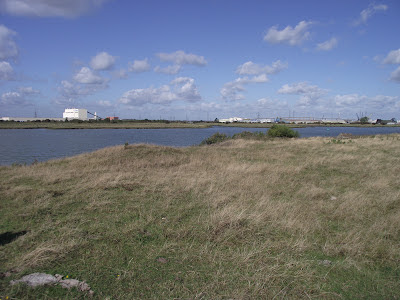 Alongside the shrubs were the remains of what must of been a building's footings or walls and we stood alongside them trying to visualize the thoughts and feelings of those relatives in 1900-1910 in such a beautiful but isolated spot. To that end we also had the descriptions of the cottages given in the documentation that I mentioned earlier, see below. 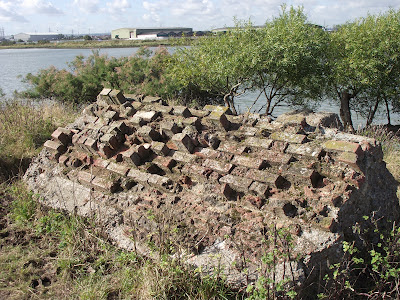 These descriptions of Seaview Cottages range through various dates, from 1850 through to as late as 1942, but the one I particularly like is as follows:-
"c.1850 - a block of four cottages built about this date and each comprising: oven and boiler range in each living room and one ten gallon cast iron pot fixed in each wash-house, five bar doors and frame to each, and one stove in each house in the upstairs room; also a shop and cellar attached to one of the cottages and used as a retailing place for beer, not to be drunk on the premises, and containing two beer stands, 12 feet long and 1 foot-10ins wide, in the cellar. In the bakehouse is a 2 bushel oven and door, one kneading trough...and outside, four iron bound water caskets".

This documentation that has come to light goes on to make mention of and briefly describe many of the other buildings to be found around Elmley and is really interesting but at the same time leaves me with a slight uneasiness about the black and white photo actually being of Seaview Cottages. There was definitely a building on that spot on the hand-drawn map and the photo confirms that fact, and although it could of been split into several "cottages", it looks like a stand-alone house to me. Given that there were also two short terraces of cottages a hundred yards or so away and for me, the description above seems to be describing them, but I'll leave it to readers to make their own minds up.
Posted by Derek Faulkner at 15:51