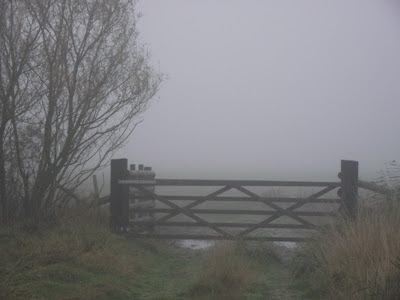 Over Saturday night and throughout Sunday, we had virtually 24 hours of non-stop rain of varying degrees of intensity. As a result I gave the reserve a miss yesterday, with seven days a week always available to me I can't see the point of getting soaked for the sake of it.
This morning I got up to thick fog and drizzle and a forecast that suggested it would be stuck like that for three days unchanged, which, put politely, was a tad depressing. But neither I nor the two dogs were to be denied a walk for a second day running and so off we set for the reserve, arriving as you can see above, to a view across the reserve that clearly indicated that birdwatching was out of the window, or to be more accurate, even bird seeing! Visibility at best was a 100 yds and for a lot of the time, 50yds, coupled with regular bouts of light drizzle, although funnily enough, or perhaps perversely, I quite like walking round the marsh in the fog. It also helps of course, if you can find your way round it without getting lost, as I'm confident I can after 26 years of walking the reserve in all weathers. However there were three Chiffchaffs calling in the willows alongside the gate and so bird identification by calls alone was going to a fun challenge for my birding knowledge today.

So off we set and almost immediately it was clear that yesterday's rain had had an enormous impact on the reserve, with some ditches almost overflowing and in the grazing marsh itself, large areas of standing water that wasn't always obvious in the longer grass until you started splashing through it. The reserve is now experiencing water levels that we wouldn't normally expect to see until around January and I imagine on the next sunny day it is going to look quite fantastic. A Wheatear was the next bird recorded and this time seen, as it perched on a gate post just ahead of me, will this be the last of this year I wondered as it disappeared into the gloom. Then the bird calls began to sound proper, I could hear Greylag Geese and Mallard somewhere to my right, a curlew passed somewhere overhead, leaving it's eirie call behind, Lapwings "peewitted" in the fog and I was reminded of an event in The Wind in the Willows. The part where one cold winter's afternoon the Mole set off into The Wild Wood and as the darkness set in he could hear and sense the scampering of rabbits and weasels close by and threatening him, but he never saw them. OK, I wasn't scared from hearing a few bird calls but the thick fog can have that sort of spooky feel about it, especially as sounds carry over longer distances and can seem nearer to you than they actually are.
The cattle had turned some of the muddy areas into very muddy areas and poor old mini-legged Ellie soon had the appearance of a fast moving clod of mud with white bits on top - so different to the longer-legged Midge who simply ambled through such morass without even getting her belly dirty, a bit Lady and the Tramp like.
The dark shape of a hawthorn bush began to take shape in the fog and from its top a Buzzard slowly flapped away from me, soon lost in the gloom as it headed across one of the arable fields. Last week I watched a tractor sowing wheat in that same field so it won't be long before it begins to turn green as the first fresh shoots begin to break free of the soil, encouraged by the wet, mild conditions. Those same conditions had also encouraged the growth of the field mushrooms and in just one small field alone I counted 150+ of them, loads of white dots growing in circles, in lines, or just dotted about. Many years ago when my Sunday morning marsh walks were followed by lunchtime pints in the local Workingman's Club,we used to fill up a bread basket with such a mushroom profusion and take it in the Club for everybody to help themselves to. It of course often saw the drinking of extra pints, supplied in gratitude, and a less than straight walk home.

We ambled on, be-jeweled spiders webs adorning just about every bit of vegetation that we passed, and came suddenly upon the small cattle herd, black shapes suddenly appearing from the fog and the drizzle. No matter what time of day or night that you visit they are rarely seem not eating, it must be a tad boring, a bit like us permanently eating just egg and chips for breakfast, dinner and tea, although I suppose we would get the choice of vinegar or tomato ketchup with it. I do recall that as a fussy eater as a young child, that many of  my dinners were egg and chips because I didn't like vegetables and such like, so I guess it can't be too bad. And that's how the walk in the fog went on, the fog got thicker, the drizzle got heavier, I got wetter and silly thoughts and recollections were pondered over, until at last, like some great ship appearing before us, the barn hove into view and it was time to just clamber into the car and disappear off home.
Posted by Derek Faulkner at 16:02