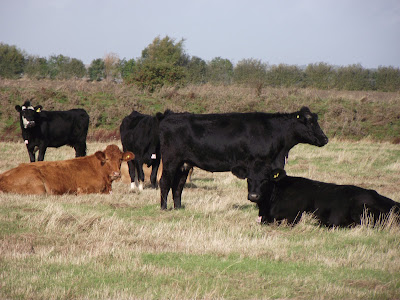 It rained early this morning but by 8.00 it had been replaced by blue skies and sunshine and despite a moderate wind it was quite a mild day. I began the day with a visit to Elmley to pick the sloes that I needed for this winter's sloe gin. My usual supply from a hedge at Harty had already been harvested by somebody and so I had to look further afield, but the Elmley ones were plentiful and nicely softened and so a late winter walk will be warmed by the odd snifter of that when its ready.
A couple of weeks ago the reserve cattle and their calves were taken away to the stock yards, the calves for weaning and the parents for later auctioning. They've now been replaced by these Red Devon/Aberdeen Angus cross cattle which are apparently in-calf and will stay on the reserve until being taken away to the stock yards in the New Year in order to calve in sheltered conditions. Unlike this time last year when the reserve was already grazed out, this year there is plenty of grass for the 70 odd cattle that have arrived. 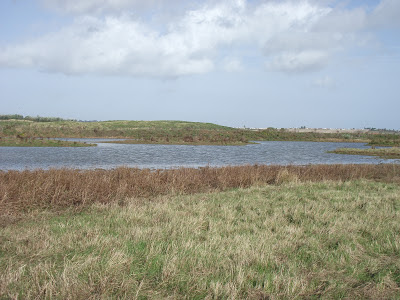 The reserve looks really quite splendid at the moment, its green and well grassed and the water levels are well up, as the Flood scrape shows in the picture above. Its just a real shame that such near perfect conditions aren't attracting any decent counts of waders or waterfowl. We carried out the monthly WEBS count on Monday afternoon and while the two guys counting the wader roosts at either end of the reserve had very good counts, my circuit round the main central part of the reserve, once again recorded another lowest monthly count. Likewise, the evening before saw me on the seawall till dark taking part in the first of this year's Harrier Roost counts, and I saw none at all, neither Marsh or Hen, although two other sites on Harty had good numbers of Marsh Harriers going into reed beds so all was not lost.

But as I've said before, its not all about birds and Ellie and Midge always find something to dig or sniff at, as you can see below, although this particular rabbit warren was empty to their frustration. Ellie was a year old recently - time flies, and looks to have grown to her full height now, although height seems the wrong word, I think Midge's toes are longer than Ellie's legs!
Also on that rabbit warren were several late flowering Ragwort plants, giving a bit of late colour and on one of them I was pleasantly surprised to find a Small Tortoiseshell butterfly both feeding and basking in the sun. After getting my knees wet several times trying to crawl close enough to photograph it, just to watch it fly off, I gave up and left it to it.
The lateness of the summer wildlife didn't end there either, as I walked past a couple of the ditches odd Marsh Frogs were still leaping into the water from the banks and some dragonflies still circled above. I guess we're right on the border-line now of summer and winter and it'll take just one sharp frost to tip the scales. 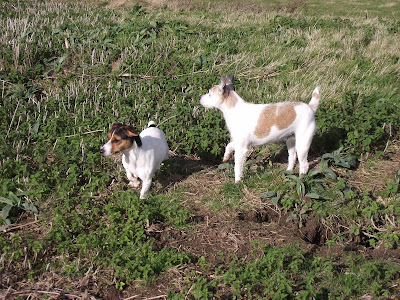 But until the frost does arrive we'll hopefully still get little feasts like these field mushrooms that have suddenly sprung up. Mushrooms with real flavour, that grow to make bacon and egg breakfasts taste so much better. Sloes for gin and mushrooms for breakfast - real autumn fruits. 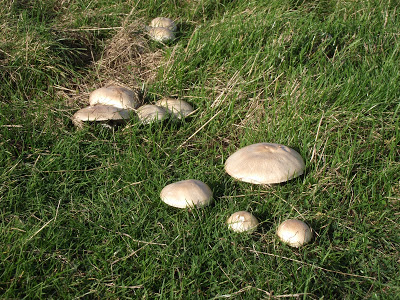 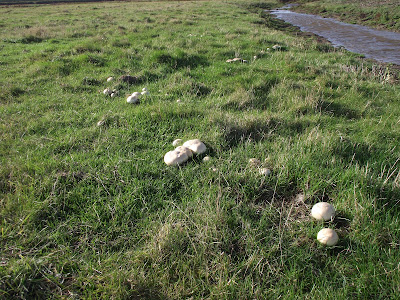