A Change in the Weather

After several days of hot, or very hot and sunny weather, it was quite a shock to get up early this morning to heavy grey skies, a chilly NW wind and later, heavy showers. Walking across the reserve not long after, there was an almost autumnal feel to things, although there is the promise of more prolonged and hot and sunny weather later this month.
What the hot and dry weather has done is to intensify the drought that is beginning take hold on the reserve, there is very little fresh, green plant growth appearing now and the grass has a dry and brittle look about it. The ground is dust dry and cracked and the ditches smell of rotting eggs as their water levels continue to drop and becomes more and more devoid of oxygen. The Greylag Geese and their juveniles are now gathered in small flocks along the edges of the Delph fleet for safety as they hard into their moults now - it's been a good year for both Greylag and Canada Geese goslings this year. A lot of the Lapwings have moved away now as the ground hardens up but a few small post-breeding flocks remain and for them it has been just an average breeding season at best. To add to the autumnal feel, the passage waders have begun to appear around the muddier areas, mostly Green Sandpipers but we did have a Spotted Redshank yesterday, an uncommon bird on the reserve these days.
So to summarise, it's bone dry, with yellowing grazing areas, fast disappearing water levels and few birds, quite boring to be honest.

However, during this last week my girlfriend wanted to go to Reculver Towers to re-create an old family photograph taken there in 1953. Now the Towers have been a feature across the sea on the mainland horizon all my life and yet remarkably I've never visited there, despite the area being well known for it's regular rare birds and only being a fairly short car ride away. Directly below the Towers, (the remains of an old church), is the sea and the coastline stretches east and west in both directions. 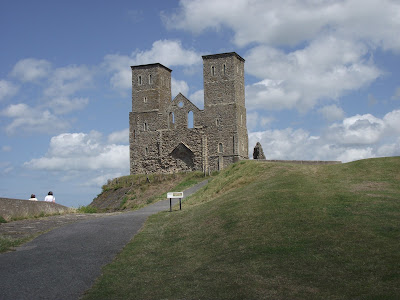 After the first visit, we had enjoyed it so much that we went back a second time, mainly so that I could wallow in the sight of a large number of birds, not the rare ones mind you, but Sand Martins. They have two colonies in the sandy cliffs not far to the west from the public car park and for me were as exciting as any rare bird. 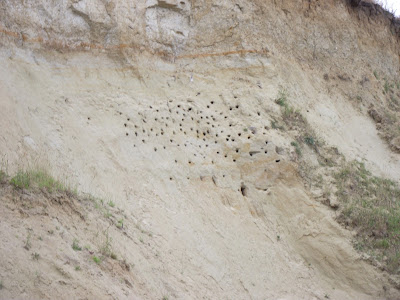 For whatever reason, there were two distinct colonies along the cliff face, about 80 yards apart and according to Chris Hindle on his excellent Reculver blog  http://reculverbirding.blogspot.co.uk/ the nest holes total 203 holes. I sat watching the birds swarming around and in and out of the nest holes for some time, quite enthralled. My pleasure stemmed from pure nostalgia I think. During the 1950's/early 1960's we had a similar colony at Minster cliffs here on Sheppey and as a youngster I spent several summers watching for the birds to return from their winter quarters in Africa and begin nesting again. Unfortunately cliff falls began to alter the lay-out of the cliff face and the eventual tall growth of silver birch and willow trees further down the cliff pretty much obscured the nest site and we haven't seen them the birds there for the last fifty-odd years. It therefore brought back lots of childhood memories to see the birds in that way again and for me, far better than seeing the Icterine Warbler that was close by recently. 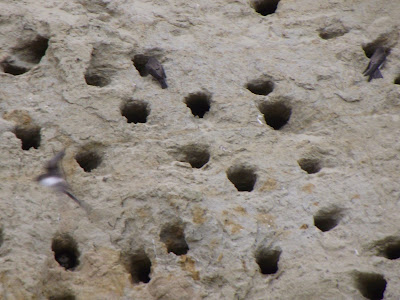