Well, well, "famous last words" as they say and mine were to title my last blog "The Drought Goes On". Yesterday and overnight, we have had many hours of heavy rain, near gale force N winds and a drop in temperatures. After spending most nights over the last couple of months sleeping with the bedroom window open, last night I lay there listening to the rain being lashed against the glass by the wind and it could so easily of been a winter's night.
Having completed harvesting the rape, baling it's waste straw and disc-ing the top couple of inches of soil ready for re-sowing with winter wheat, I imagine the farmers were looking to turn their attention to harvesting the corn and spring barley next. This last week both crops have looked as dry, ripe and golden as can be but unfortunately this morning, after the rain, they were quite sodden. With more heavy rain due tomorrow afternoon and an unsettled week ahead, the harvest could be delayed somewhat and possibly need drying when they do get it in, which is expensive. Mind you, at least a combine machine can do one field in a couple of hours while the weather's dry, imagine how stressful it must of been when they did it by hand over several days and had to try and beat the weather.

Venturing out onto the reserve this morning I was at least expecting puddles all round the track but there were none. The only real sign that it had rained hard was the fact that the surface soil of the marsh was moist but hopefully that will encourage a degree of grass growth, or even a nice mushroom or two. It has to be also hoped that the heavy rain, while not adding to the ditch levels, has at least re-oxygenated them.

During the night, as I lay in bed listening to the rain and wind on the window, I suddenly thought of the Kestrel chick that was out in the open by the nest box on the reserve. Oh no, surely that ball of mainly fluff is going to be sodden and cold but no, when I got there this morning thereit was atop the old railway sleeper, calling for food and dry as a bone. How could that be? - well just below it is a short length of old drainage pipe and looking inside I could see the evidence that the bird had spent the night sheltering in there, before hopping on top of the sleeper in order to call for it's breakfast 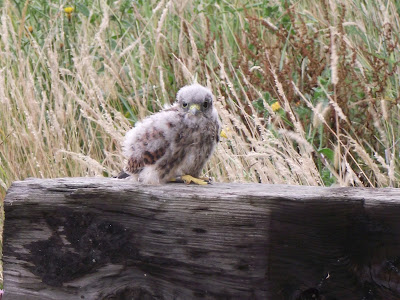