Dragging myself away from the Test Match for a while, time for another blog.
All across Harty the fields are golden with ripe rape, corn and in a few places, spring barley - it's harvest time!
Unfortunately this photo was spoiled a bit by the early morning overcast sky but you can see how close the crops are to being cut. 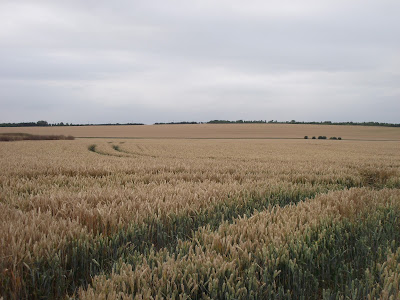 Here though the rape cut has begun and the field will be left looking quite featureless and very dry and I'll be very surprised if that dryness doesn't see poor yields this year. 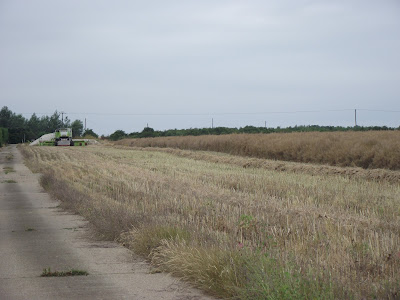 On the reserve two Kestrel chicks are growing well and were having a look at the outside world that they will soon be inhabiting. They were both ringed recently so that we and the BTO can keep tabs on them. 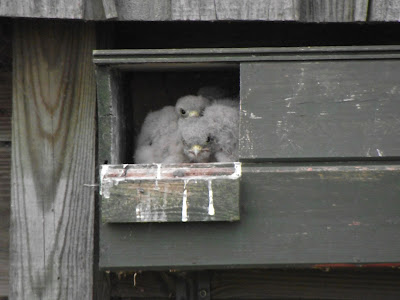 A couple of Barn Owl chicks, also ringed, will also soon be leaving the nest and although many broods are late this year, Sheppey has several successful nests, although according to the BTO, nationwide this year Barn Owls have not had a very good breeding season.
Going back to the dry conditions, the photo below shows one of our access tracks on the reserve. Between New Year and May it was impossible to get along this track due to the width and depth of the water, with the water at one stage up to the base of the short earth face of the slope and so around two foot deep - now look at it. 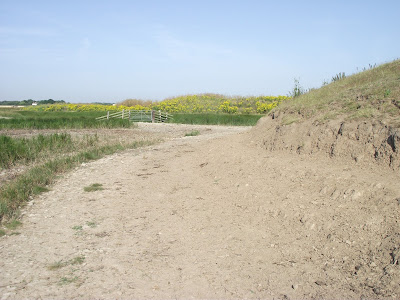 To the left of the above photo is a largish area of water and soft mud where the "S Bend Ditch" is drying out, both here this morning and at the Flood Field puddle, there was not a single bird to be seen. It's all a pretty boring trudge round, with everything looking very dry and tired and only the reed beds have any real sign of bird life as the Reed Warblers continue to sing and no doubt breed. Summer is slipping away and it's a bit of a shock to realise that we're only six weeks away from the start of the shooting season although apart from the geese there will be very few ducks to shoot at, I only saw two this morning!
With flowering plants now at a premium across the marsh these clumps of Ragwort in flower become very important for the bees, butterflies and moths. 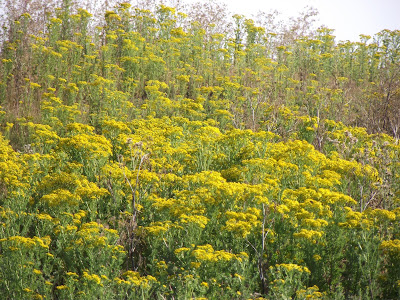 None more so than the Cinnabar Moth caterpillars, who feed on the leaves of the plant. 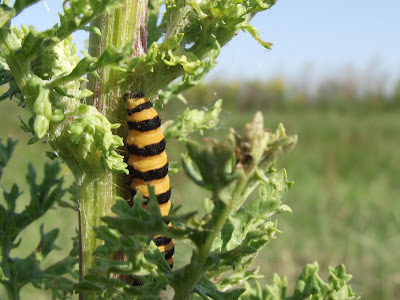