Walking across both the reserve and the two RSPB fields alongside this morning, it was humid, very windy and sunny, before all the clouds eventually rolled in. Already, after just a day and a half of constant wind and sunshine, any beneficial effects from the weekend's rain have gone entirely and the ground is bone dry again. The only decent area of water left now is the Delph fleet (below) and a couple of ditches that run off of it, but even there the Delph is at least two foot shallower than it was in the winter. 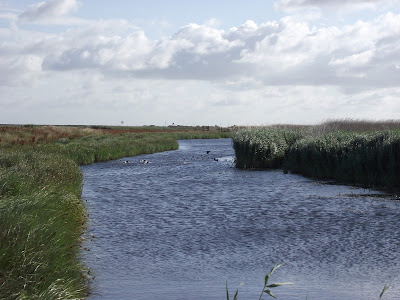 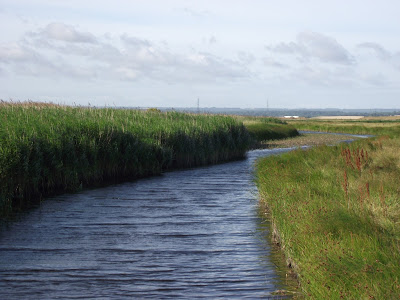 So anyway, there I was, aimlessly wandering across the marsh and not seeing any particular numbers of anything, even the butterflies seem to have decreased dramatically, when Ellie the younger terrier, took off in hot pursuit of a hare. Well, I say hot pursuit but when you're legs are so short that you could be a dachshund, hot pursuit means that by the time she'd crossed the first field, the hare was probably in Leysdown having a cup of tea. So back she eventually comes, tongue hanging out and jumps in the nearest ditch to cool off - 'cept the ditch was an inch or two of water and several inches of black smelly mud - that was an impressive smell in the car going home!

We carried on and as we went I mulled over various schools of thought, as you do when the walk is not too inspiring. I got to thinking about how few birdwatchers visit, or indeed have ever visited the reserve. OK, during the summer and autumn when it's dried out as it is now, it's pretty crap and fighting your way through thick vegetation on top of the sea wall to get to the hide would be a hard fought waste of time. But when the reserve is part-flooded in the winter and holding large numbers of wildfowl and waders, still people fail to visit. I've always thought that perhaps it was me and the fact that I'm out there at the crack of dawn in the winter means that I don't see people who perhaps come later. But the Richards Pipit episode last winter laid that thought to rest. As I wrote at the time, birdwatchers (twitchers when I'm in an unforgiving mood), would arrive in large numbers throughout the day, lay siege to the bird by encircling it and then in most cases bugger off again. Probably less than 20% of them could be arsed to walk the extra few hundred yards to look at The Flood which was teeming with birds.

In all honesty, between the 1st September and the 21st February, I definitely see, and have far more chats, with the local wildfowlers than I do many visiting birdwatchers. They're always an interesting bunch of guys to chat with and unlike many conservation types, they're far less judgemental and critical of other countryside users, or at least the guys I speak with are.

So I pondered all that as I wandered round this morning, just stopping every now to take in the call of a Bearded Tit or the odd high flying Whimbrel. And for me personally, the lack of visitors isn't a problem, at least I get the place to myself and I don't get the complaints of being another nuisance dog walker.
Posted by Derek Faulkner at 13:35