By early 1915 depite the First World War being in full swing and Eastchurch airfield's close proximity to the Channel, the airfield was still having a job being accepted as being of serious use to the war effort. However, as German Zeppelin raids began to increase down the East Coast a trickle of what was to eventually become twenty four Bristol Scout aircraft began to arrive at Eastchurch in March 1915
Below you can see how the airfield looked from the air during late 1915 with the hangars to the left and accomodation huts in the middle. 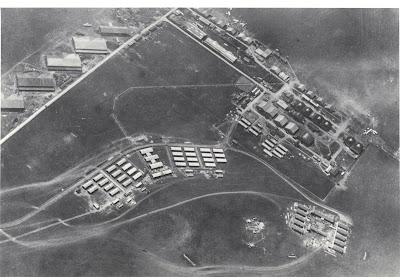 Bristol ScoutC number 1246 - one of the twenty four delivered to Eastchurch in 1915. 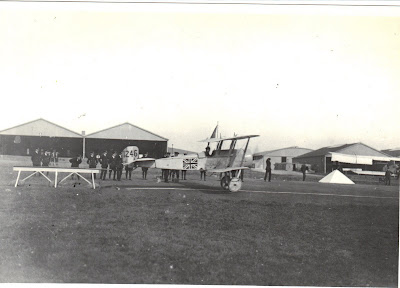 The Zeppelin raids had begun to increase in intensity since the beginning of 1915, with the airships drifting across the North Sea, mainly at night, and hapazardly dropping their bombs on towns and countryside down the East Coast. Surprisingly, some of the bombs carried weighed up to 600lbs.
During this period Eastchurch based aircraft were involved in at least three enemy raids. The first, on the 16th April, saw a German Taube monoplane cross the coast of Kent at Kingsdown, causing the scrambling of aircraft from Eastchurch, Manston and Dover, all with no result.
On May 26th, five Naval aircraft from Eastchurch and Grain went up to engage the enemy airship LZ38. It was a fine, misty day and LZ38 had drifted in over the Essex coast, presumably to bomb London. However, for whatever reason it ended up dropping it's bombs, seventy in all, in the Southend area. Unfortunately the defending aircraft failed to even sight the airship and the only damage incurred was to two of them as they re-landed.
The third raid occurred on the 9th August 1915 when the airship L10 came in over East Anglia and headed south towards London. Fortunately it got a bit lost in the dark and eventually dropped most of its bombs over the Thames Estuary, before heading on over Sheppey. Here it dropped a total of twelve bombs in a line, about six hundred yards from the hangars, breaking just a few windows. Two Eastchurch aircreaft that had gone up prior to the raid failed to find the airship in the dark and the mist and so it escaped. A lucky find by the airship or a planned raid, it is not known, but it was the last real raid on the airfield until 1940.

By 1917 the Germans had re-thought their strategy and had begun re-equipping with the larger Gotha and Giant bomber aircraft. The Gothas had a crew of three and with two Mercedes engines capable of doing 87mph at 12,000ft. The bomb load varied with a range of between 600lbs and 1,100lbs of bombs, although over England the load was normally 6 x 110lb bombs.
A Gotha bomber is illustrated below as the crew prepare for take off from their airfield in Belgium. A tad draughty on a cold crossing of the North Sea or the Channel. 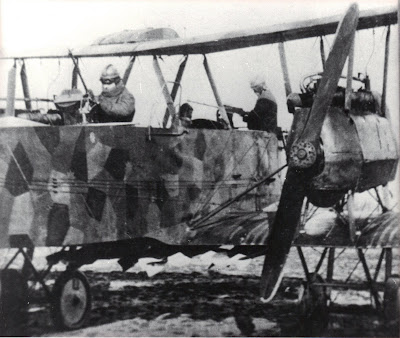 These aircraft were a significant improvement on anything that both sides had and they immediately began numerous raids across the Channel to England. The best that the British could do was to replace some of their out-dated fighter aircraft with what eventually became a famous WW1 aircraft, the Sopwith Camel, and as a result some were sent to Eastchurch. See one of the Eastchurch aircraft below. 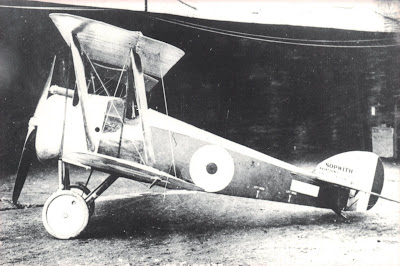 Prior to that, on the 5th June, at about 18.00hrs, 22 Gothas flew into the Thames Estuary and began bombing both Sheerness and Shoeburyness. The raid only lasted around five minutes but caused eleven deaths and thirty-four injuries and although the eight anti-aircraft guns at both places fired five hundred and four rounds, only one Gotha was destroyed and sixty-five various aircraft sent up to intercept the Gothas never got anywhere near to them. The one hit Gotha meanwhile had come down into the sea off of Bartons Point, Sheppey and was eventually recovered along with its crew.
At Eastchurch, Charlie Ward was in the eighth round of a ten round boxing match in the airfield's Parade Square when the Sheerness raid began. Silly as it sounds, the audience of servicemen were ordered to remove their conspicous white cap covers before the remaining two rounds were completed!
These bombing raids carried on throughout 1917 and saw much action by the Eastchurch based Camels and other aircraft until eventually the night of the 19th/20th May 1918 saw the last German air raid over England until WW2.
That evening ten Gothas and three Giant bombers spent two hours wandering in over Kent and Essex to be met by an incredible number of anti-aircraft shells and patrolling fighter aircraft.Six German aircraft were shot down and Gotha GV979's demise was best documented.
Attracted by a concentration of searchlight beams east of Faversham, Capt. Brand arrived in the area in his Sopwith Camel of 112 Sqd from Throwley. As he patrolled at 7,000ft waiting for a target, an enemy Gotha passed to the left of him at about 500ft and Brand immediately set about approaching the Gotha from the rear. Both Brand and the Gotha's rear gunner began firing at each other at the same time and the Gotha's starboard engine was put out of order. As the Gotha began to dive away Brand closed to within twenty-five yards and fired off another three bursts of twenty-five rounds each. As a result the Gotha burst into flames, scorching Brand's exposed face and fell to the ground over the south-east side of Sheppey.
A search the following day found the remains of the aircraft and the bodies of the three crew, who were later buried in Leysdown cemetry, where they were eventually exhumed and re-buried at the Cannock Chase War Graves site.

Little else happened at Eastchurch for what was left of the war, except that in the April of the year the Gunnery School there was split up and a section known as the Aerial Fighting and Gunnery School was formed at the Leysdown airfield. This airfield, originally the site in 1909 of the Aero Club and Shorts Bros. aircraft factory had been retained and expanded and at the end of the war was visited by officers of the American Expeditionary Force for extensive flying instruction there.
It is pictured below during WW1, with the seawall in the background and Muswell Manor just out of picture to the right. Some stables are on part of the site now. 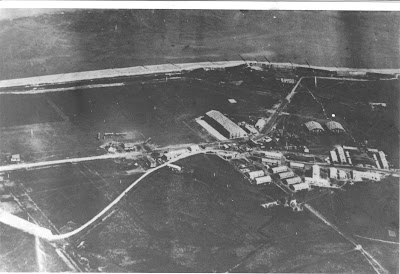