A visit to the reserve earlier today was not a pleasant experience due to the weather. It failed to get fully light and there was an icy cold N. wind blowing across the marsh pushing in bouts of near sleety drizzle and rain. It was if we had taken three steps back into mid-winter again. As a result I didn't stay there too long but did note a couple of long stay species as usual.
The flock of White-fronted Geese, currently numbering around 290 birds, were grazing on the water-logged grazing marsh in front of me as I made my way across to the seawall. As seems to be the case in recent years, once the shooting season finishes the birds become surprisngly trusting and allow you to get quite close before they take off, and even then they only move a short distance away.
The Hooded Crow is also still there, socialising with an increasing flock of around 150 Carrion Crows, obviously shooting these seems to be having the opposite effect.

Yesterday, while it was actually sunny and pleasant, I took the two photos below which detail some of the many ant hills on the reserve. I don't know about nationally, but certainly locally, these ant hills were/still are known as Emmet casts, using the old name of emmet for an ant.
These emmet casts are concentrated into only a few of the grazing meadows on the reserve but where they are they are very numerous and give an almost lunar appearance to a field. They are the work of the Yellow Meadow Ant - Lasius Flavus and tend to be a prominent feature of old pasture land.
There was an interesting article by a Tim King in Britsh Wildlife a few years ago that describes the history and life-style of these ants really well and which I am indebted to for much of this information. Apparently this particular ant is not the first one to invade abandoned arable fields, only appearing after about ten years. However, once thay have become established their casts, or hills, create regeneration sites for plants, oviposition sites for insects, a food source in winter for some birds such as woodpeckers and corvids and north and south facing slopes which act as micro-habitats for plants and insects.

These casts or hills, or mounds, contain numerous galleries where the ants raise their broods and increased temperatures at the soli surface may speed up the brood's development. On a warm summer's day the workers move the pupae around beneath the surface, following the movements of the sun. Apparently most of the energy to support the 8,000-40,000 ants per mound comes from farming underground aphids that live on the roots of nearby plants. The ants spread out and away from their mound beneath the soil in order to locate these aphids which are then "milked" for their honeydew and this is then taken back to the mound and regurgitated to their sister workers. It has also been suggested that in late autumn the ants collect aphid eggs and store them in their mounds before replacing them on suitable plant roots in the following spring, thus farming and maintaining their food supply.

The numbers of queens and drones that a colony can produce depends on the number of workers and the size of their territory but the most vigorous colonies frequently produce 400 queens and 1,000 drones, which as we have all seen, all leave the nest at the same time in August. Many new colonies start with more than one breeding queen and amazingly Yellow Meadow Ant queens have been kept alive in captivity for up to 22 years!

Its a fascinating subject but I'll leave it there. 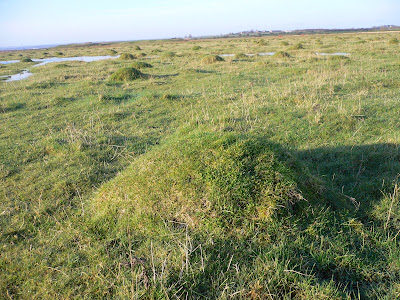 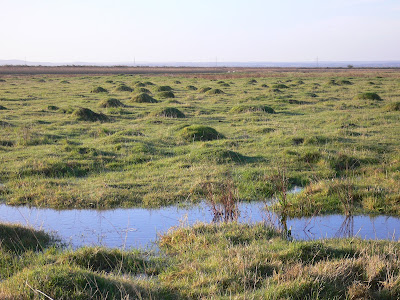