Well here we are, another wet and cold day on sunless Sheppey and yet probably only a couple of months or so away from hearing the first person complain about it being too hot - hard to believe but it will happen!
So, another dose of Sheppey's history from my aviation files - I'm afraid the photos aren't too brilliant as they are scanned copies of copies.


In early 1911 Sheppey's aviation history had been in existence for less than two years, having begun in 1909 at Leysdown with the Aero Club's new grounds and a Shorts Bros. aeroplane factory, to a move by both in 1910 to a new site at Stonepitts Farm below Eastchurch. This site, which is now Eastchurch Prison, expanded quickly, as had the potential of the aircraft, from flying a few yards in 1909 to several miles in 1911. As a result it had been chosen in June 1911 as the site for that year's Gordon-Bennett Aviation Cup, a really huge jump in prestige for Sheppey as a whole.

The Cup had been awarded by James Gordon-Bennett, the American editor of the "Paris Herald", for the fastest time over a pre-set distance by an aircraft. In 1909 an American had won the first race in France and then in 1910 the Englishman, Claude Graham White, had done likewise in New York. Thus in 1911, with England as the holders, it was held at the Royal Aero Club's flying grounds at Eastchurch, Sheppey.

For a week before the event, preparations were being made, with contestants putting their machines through various trials. The course itself had been made triangular, with red-topped pylons marking the three turning points. One length ran east to west past the Stands at one and a half miles long, another to a point between Great and Little Bells farms being one and three quarter miles long, and the stretch between the two making up almost half a mile. All in all the aircraft would have to cover 25 laps of this course to make a total of 93.477 miles flown. On the day the race was scheduled to begin at just before noon.

Race day began dull and threatening with a gusty wind but it didn't prevent the competitors from getting up early and carrying out time-trials and trying to out-psyche each other. In the end, the result of these early morning trials saw C. Weymann awarded the fastest time. This American competitor, born in Haiti, was just five seconds faster than Gustav Hamel's Bleriot, prompting Bleriot himself to make adjustments to Hamel's aircraft. He clipped the end of each wing square, bringing the full span to within 17 feet and though this had the effect of increasing the speed it also meant that cornering at the pylons would have to be carried out wider.

Surprisingly, despite being the current holder of the Cup, Graham White had been unable to secure a suitable aircraft and so the final line-up of competitors was as follows, including their engine size:-

A small point of interest, which describes the times, occurred at 8.00 that morning with the arrival at the grounds of a Mr. Gordon England in a Bristol biplane. Flying over Sheppey he had got lost and so had to eventually swoop down over the Halfway Houses village in the centre of the Island and read the directions for Eastchurch on a road sign. (Not something you can do in a Harrier jump-jet these days)

The police force of the day was a hundred men of the Kent Constabulary and they guarded the approaches to the airfield and were to keep the crowds in order. A line of Royal Engineers from Chatham were stationed at intervals in a line along the front of The Members Enclosure, and at the same time, all along the road from London, the Dunlop Tyre Company indicated the route to Eastchurch by stationing men with "signposts" surmounted with miniature flying machines. There were also men from the Queenborough and District Ambulance Corps in the Public Enclosure and Boy Scouts were used around the course for signalling duties.
This left only the Press to accommodate and they were given the special privilege of using the hangar of the late Cecil Grace, who had been killed just six months previously, and whose hangar still contained his flying machines.

All was set then for an expected huge crowd to pay their money at the gates and enjoy a fine piece of aviation history. Here though, things went quite badly wrong because most of the estimated 10,000 crowd that day were to come by train and Sheppey's little Light Railway couldn't cope. This train line with its small engine and carriages had only been in existence ten years and ran from the main line at Queenborough, across the Island to Leysdown, with stops at a few tiny stations on the way to pick up small numbers of villagers and farm workers. Despite running fifteen "specials" from Queenborough to Easstchurch that day it just couldn't cope with people thousands of people pouring off the main line trains at Queenborough and expecting to then be transported to Eastchurch. This problem was magnified at the next stop along the line from Queenborough, Sheerness East, a short distance outside the town of Sheerness, where people arrived in their hundreds to find the train already packed to overflowing once it left Queenborough. The wait at Sheerness East was two hours and one gets the picture of the little train chugging towards them across the marshes with people hanging out from everywhere like one of those trains in India.
Many people at Queenborough, having bought a ticket but unable to get on a train, decided to walk along the lines all the way to Eastchurch. This prompted the Traffic Superintendant to order the gateman at Sheerness East to take the names and addresses of the people as they arrived, for trespassing - not easily done with a few hundred angry people striding towards you!
After lunch the situation worsened, with up to a thousand people waiting at Sheerness East and the railway authorities became very nervous of what might happen to both the train and its driver. It didn't help when tickets also ran out and although some people drifted back home, many others walked along the lines or jumped onto and overloaded the trains without paying - forget the Indian railways, more like Keystone Cops now!

As many as a thousand people also arrived at the airfield in two hundred odd cars that they parked to the rear of the Members Enclosure and these also became an attraction themselves. Aero Club members were admitted free to their special enclosure on production of their membership cards but their guests were expected to pay an admission fee of five shillings and the charge for cars, plus driver, was ten shillings - quite a sum in those days. 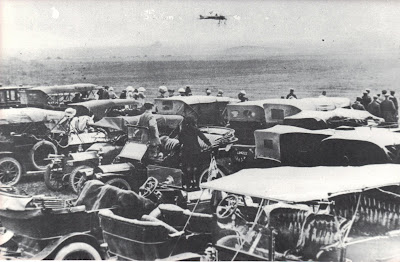 The public didn't have such special enclosures but in some ways probably had better all round views, they were shown to the slopes of Stanford Hill, lent to the Club for the day by its owner, Lt.Col. Sir George Holford. From there they had a view of both the whole course and The River Swale and the mainland behind. Admission to these slopes was just a shilling and refreshments were provided by the Army and Navy Stores. Quite idyllic until just before lunch, with the race soon to begin, the wind increased and a sudden rain storm dropped across everybody. However, soon after, the wind dropped and there was unbroken sunshine for the rest of the day. 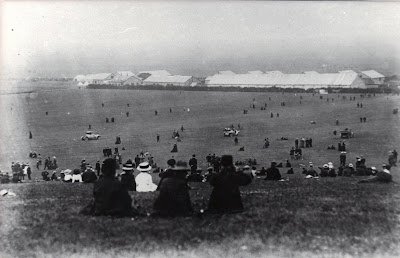 Below, you can see two of the magnificent machines that took place in the race. The first is the Baby Wright with its little 50hp engine, but it wasn't necessarily all about speed, it was also about actually finishing with a speed!
The second is one of the Nieuports, with men acting as its anchors. 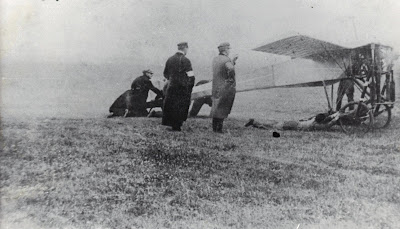 And the race itself, well Mr. Hamel was first off and with roars of applause, left the ground at 2.45, followed at fifteen minute intervals by the other competitors. Unfortunately his newly clipped wings were to be his undoing and at just the first pylon, the tight turn caught him out and a wing touched the ground. The aircraft, with its engine still revving, bounced for twenty yards and broke up as it went. Hamel was luckily thrown clear and eventually stood up with just slight concussion and bruises.
Second up was Chevalier but on his 12th lap he too had problems when his Nieuport's engine failed but he crash-landed unhurt. He later made a second attempt in a reserve machine but suffered the same fate on only his first lap. All the other contestants successfully completed the course, although Mr. Ogilvie in the Baby Wright did have one small hiccup. The little biplane, attracting much sympathy from the crowd as it plodded round the course with its little 50hp engine and being lapped at regular intervals by the others, ran out of petrol after 20 laps. But it landed, re-fuled and was able to finish the race.

Once all the aircraft had completed their 25 laps and their times had been worked out the results were as follows:-


With the race over an informal dinner took place in a marquee on the grounds and the Cup and £1,000 were awarded to Mr. Weymann, with a second prize of £1,000 going to LeBlanc. Later, those members returning home by train had the luxury of a special train laid on to leave Eastchurch after the dinner.
Outside, Mr. Gilmour entertained the dispersing crowds with an excellent display of flying in the very same Bristol aircraft that had failed to start at the beginning of the race.

And that, as they say was that and doubtful wether Sheppey has ever held something of such magnitude ever since.
Posted by Derek Faulkner at 10:01