This morning was a second one where the weather was misty, grey, gloomy and cold in a S.E. wind. This awful winter seems to be never ending and its been four months now walking round in heavy winter clothes, we must be owed a hot and sunny summer this year, despite the fact that that will no doubt upset some people just as much.
The first day of sunbathing in the garden this Spring is going to be celebrated with a bottle of champers I think - can't wait.

There were a couple of promising signs as I walked round though, a few Skylarks lifted up into the gloom and serenaded me and just as last Saturday, Reed Bunting cocks were singing from various territories, I counted eight this morning. There are also other signs that things are changing, the grass along the seawall has grown several inches in places and catkins are coming out on the Goat Willows in the approach thicket to the reserve. So, things are primed to explode forth into Spring, we just need more than the odd sunny day to convince wildlife that its all go.

You will see below that the "S" Bend Ditch is now as full as it should be as it snakes away into the distance. Just before I took the photo the ditch had been full with around 400 mixed Wigeon, Teal and Shoveler ducks. (I took this from the top of one of the old salt workings mounds and Midge decided to pop up in front) 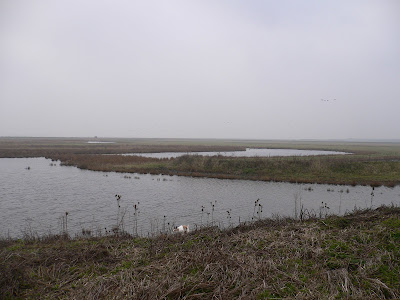 Below is our pump house, with The Flood in the background. In there we have a large diesel pump that allows us to pump the ditch water in three different directions in order to keep wet areas, wet. 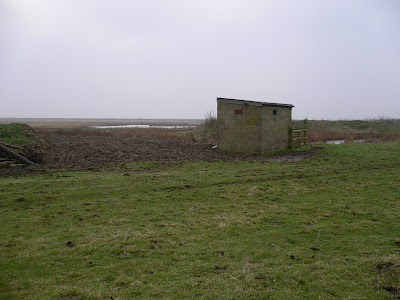 Behind me as I took the above photo, a Mute Swan went gliding by with The Tower Hide in the background. 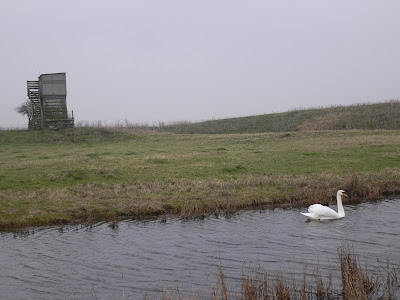 This photo was taken Wednesday, early evening, as I was standing at the Seawall Hide taking part in the monthly Harrier Roost Count. It captures dusk settling in as a full moon begins to come to life in the sky above. For my particular part of the Count it was very quiet with just the one male Hen Harrier seen going in to roost, although I did have the company for a while of two S.E.Owls. 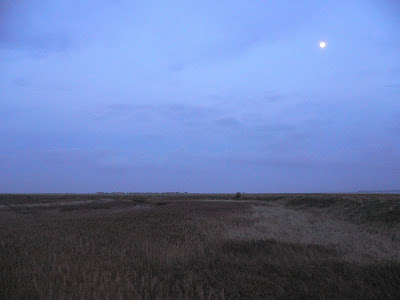 The six month shooting season finally comes to an end on Sunday night and despite my increasing tolerance and understanding at why they do what they do, it will be nice not having to share the solitude of the early mornings for a few months. There was a good example of the increasing co-operation between myself and them last Sunday when one of the local wildfowlers came round my house. He had shot a Greylag Goose a few days before at Shellness and found that it had a numbered black neck collar on it, plus a numbered leg ring from Spain and gave me the details. On Monday I went on the Internet and via a European ringing website supplied the details given and within two hours received full details back.
Apparently the goose had been caught, rung and released whilst already three years old, in the Reserva Biologica de Donana at Huelva, Spain, in January 1999. This meant that the goose was 14 years old when shot, a good age.
Now I know many of you will immediately cry shame and how disgusting that it should be shot after all that time but let's look at the positives - it had enjoyed a good lifetime, by being shot and recovered it meant that valuable information wasn't lost in some unknown place, and I'm assured that it provided a good meal.

Personally, I think that was a pretty good outcome and I hope that during the summer months that the postive understanding and shared knowledge that is developing between myself and the true wildfowlers continues to broaden in the way that it is. More trust and less suspicion has to be a good thing between us.
Posted by Derek Faulkner at 11:39