It has been a quiet week in my little life and after a hint of Spring on a sunny Thursday, a relapse back into winter with constant strong winds and heavy cloud over the last three days. Walking round the reserve in those winds has been extremely tiring but I suppose good for maintaining a degree of fitness. They have also had a rapid drying effect on the surface of the fields, which we wouldn't want to see maintained for too long but for the moment, has made walking round far more comfortable and easier.

Bird-wise the grazing marsh, main part of the reserve, has been fairly quiet with a resident flock of White-fronted Geese being the main attraction to both birdwatchers and wildfowlers. Their numbers seem to hover around the 200 mark but a count on Thursday did come up with 420, possibly some birds dropped in temporary en-route northwards. They certainly make a spectacular sight and sound and become surprisingly tame at times. They tend to arrive on the reserve from elsewhere each morning immediately the night sky begins to lighten and so to avoid scaring them up and over any wildfowlers I have been cutting across to the seawall in the dark, before they arrive.
The two photos below show the sky from the seawall hide as the dawn starts to break in the eastern sky. 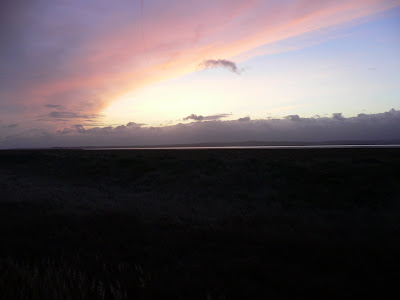 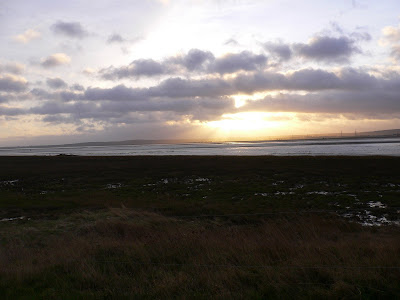 Walking back along the seawall yesterday morning I came across a wildfowler that I hadn't seen out there before and stopped for a brief chat, and I'm glad that I did. As well as being a fan of my blog, which was guaranteed to see me like him, he turned out to be a wildfowler of the old school with many, many years of experience on the North Kent marshes behind him. It also turned out that he was active on the Elmley marshes back in the 1960's at the same time that I was and although we hd never met then, we shared similar memories of how good it used to be.
I know that I have waged a campaign against the prescence of these guys in front of the reserve for many years but putting those prejudices aside, when you get talking to these, real wildfowlers of 30-40 years standing you realise that they can match or even surpass, many ordinary birdwatchers with their all round knowledge of both the local countryside's history and its wildlife. I wished the chat could of been longer.

A view down the seawall Delph fleet, with Shellness Hamlet in the distant background. (I don't know what the white effect on the wall was but it hadn't snowed this morning) 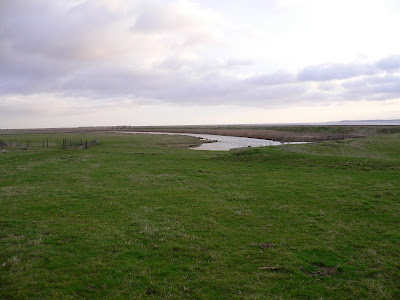 Another view across the reserve in the early morning with a large flock of White-fronted Geese in the distance just about to land in The Flood. 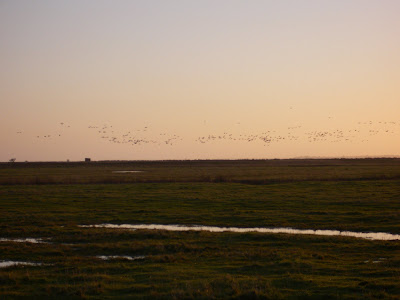