An icy and cold N wind blows up my drive, straight, or so it seems, from the North Pole. Leaves from the trees across the road blow in circles on the lawn and people in big coats scurry down the hill outside, their necks sunk deep into the collars of their coats.
I went to the reserve for a couple of hours earlier today and despite the cold it didn't seem that bad, but then I'm better in the early hours of the morning when I'm fresh to the day and more able to withstand the extremes of the weather. As the day wears on the cold gradually eats in to me and I retire indoors. to the conservatory and its warmth. Ships still plod up and down the estuary out to sea, and the two bird tables in the drive are crowded with sparrows and collared Doves. The tall hawthorn hedge that runs up the drive alongside the bird tables, shelters many sparrows and as soon as I replenish the tables out they pop. It makes the hedge like some giant cuckoo clock as in and out pop the sparrows to the tables.

Unless you're very hardy and enjoy the perverse pleasure of such extremely cold days, this time of the year, unless you have to work outside, is best spent in the warmth indoors mulling over the various memories of the year about to depart and the one soon to be apon us. Today I was thinking about books and their influence on me over the years.
Apart from the delightful little "Observers" books, and I still have my original ones on birds and their eggs, and "The Wind in the Willows", one that struck a chord with me very early on was entitled " The Strange One" by Fred Bodsworth. 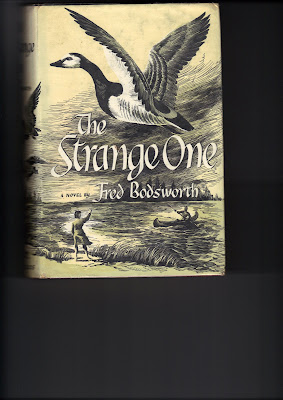 Being published in 1959, I read it shortly after whilst in my very early teens. It was a love story about a Scottish naturalist who had emigrated to Canada and took a summer job ringing Canada Geese and while there he fell in love with a Cree Indian girl. Not only that, while watching the Canada Geese they came upon a Barnacle Goose in the flock that had been blown across the Atlantic from its normal Scottish wintering grounds and had mated with a Canada Goose. The two very powerful love stories became entwined and had a lasting effect on a teenage boy and I still have the book.
Not long after I also read "The Eye of the Wind" by Peter Scott, which charted his life story from birth until the time it was published in 1961. I so much wanted to live a similar life and remember so admiring him for eventually giving up the shooting of geese after being unable to capture one he'd shot and wounded one day, feeling so guilty that he'd had to leave it so.

What else, well there have been very many that have influenced me along the way but I suppose one series that even to this day, still do, despite their simplicity, are Enid Blyton's "Famous Five" books. I have all twenty one of them and even to this day still read them occasionally and allow myself to be sucked back into that blissful and simple time of my childhood in the 1950's.
Posted by Derek Faulkner at 14:47