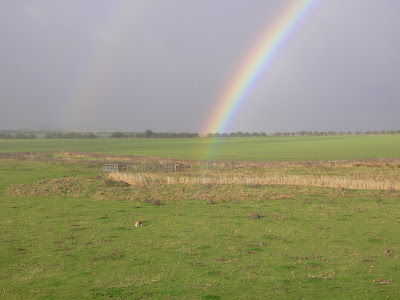 Nana my Beagle at the end of the rainbow.

I made my customary dawn visit to the reserve both yesterday and today but little has changed during this last week. The same three/four local wildfowlers were in their usual places on the saltings and once again there was very little for them to shoot at and the total of shots that I witnessed over the two mornings amounted to six and one shot Wigeon. I had a chat with one of them as he returned home along the top of the seawall and he bemoaned the lack of ducks that there are at the moment and suggested that the lack of water on the reserve had much to do with it. I agreed that he was partly right but also pointed out what I thought was patently obvious, that if they continue to turn up and gradually kill what few ducks that are left, then numbers will continue to decrease. Its amazing how the shooting fraternity always fail to accept that simple piece of mathmatics, much preferring to blame other reasons and hope that winter wildfowl will soon arrive and swell the target list.
Heavy rain is also forecast over the next few days so perhaps that will begin to put an inch or two in the ditches and keep us all happy.

Yesterday I had a few doubles bird-wise - 2 S.E.Owls, 2 Barn Owls and 2 ring-tailed Hen Harriers but none of them were about this morning, just Kestrels and Marsh Harriers making up the raptor numbers. Migrant Meadow Pipits, Skylarks and Reed Buntings are currently on or passing through the reserve now and its easy to get flocks of up to 20/30 of each species most mornings. We are due to carry out the monthly WEBS count on Tuesday afternoon and this will give us a better idea of what exactly is, or isn't, on or around the reserve.


Last Monday, like a lot of the Kent birdwatching faternity, I watched the BBC4 programme entitled "Twitching: a British Obsession". As someone who has never liked this side of birdwatching I found that it pretty much lived up to my views on the people that pursue it and made that point on the KOS Forum. Predicatably my comments met with derision and much back-slapping and chumminess from the local twitchers as they stuck together like some kind of old boys' club.
What did amuse me though was a last desperate parting shot from one of them whereby he classified me as a twitcher. Despite the fact that I never go off of Sheppey to birdwatch and haven't even been to nearby RSPB Elmley in the last twenty years, this guy seems to base his logic on the fact that the minute that you leave your own garden to go and look at a bird, that technically classifies you as a twitcher. A bit like saying that as soon as I drive my car off the drive I could be called a racing driver - but if it keeps him happy!
Posted by Derek Faulkner at 14:01