As is my habit at weekends, immediately there was the faintest glimmer of light to the east this morning, I left home for the reserve, well, after that is, di-icing my way into the car and waiting for the windscreen to clear of frost.
Once again I also had to de-ice the lock on the gate before I could get onto the reserve and by the time I parked at the barn and begun walking across to the seawall it was part light. The frost across both the marsh and the saltings was quite severe and its whiteness on the saltings served to make two wildfowlers sitting out there, easily stand out in their dark clothing. As much as I detest them being there I had to admire their hardiness this morning, I was numb despite walking about, to sit out there with feet in cold mud and not move for 2-3 hours, must of been excruiatingly cold to the point of hyperthermia. One stood up as I passed him on the seawall and the photo below, grainy because it was still part dark, should if you double click and enlarge it, show him as a dark shape and where he is he is only 100 yds from the seawall and the Seawall Hide. 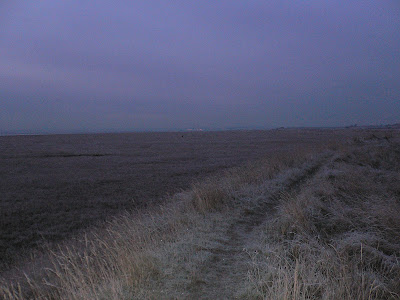 A bit further along the seawall and the light began to increase and the sky pinken as the sun came closer to the horizon. This photo looks across the frozen saltings towards the mainland and Seasalter in the distance. Amazingly, although it was too small to show up in the photo, a Lapland Bunting crossed the sky in front of me as I took it. 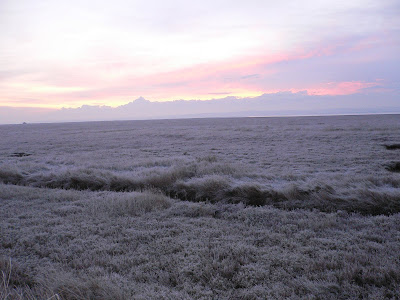 Having checked out the wildfowlers and seen no birds at all except the Lap. Bunting, I came off the seawall and through the gate below and got back on to the reserve marshland. 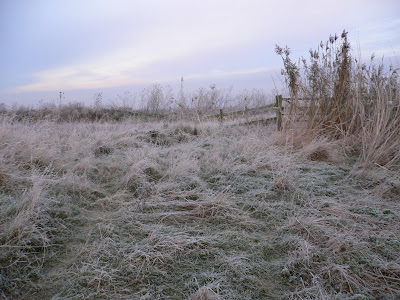 Once through the gate, I began making my way along the raised bund that runs from the front of the reserve to its rear. Once upon a time, before the current seawall was built, this bund was the seawall on one side of Capel Fleet as it made its way inland from the sea (I'll describe that another day). At the end of this bund is the rear reserve boundary, followed by the fields being restored by the RSPB to grazing marsh. If you enlarge the photo you can also see Leysdown in the distance. Bird-life really was at a premium this morning and with what little water that there is on the reserve, now frozen, it looks likely to remain that way. That said, as I walked along the bund towards the RSPB fields, the slightly different cackle of some geese could be heard and crossing the RSPB fields towards me were 34 Barnacle Geese, they made for a very picturesque sight in the frost and the gloom. 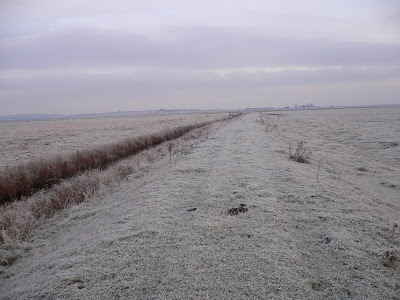 Getting to the reserve boundary, it was which way to go time and I plumbed for ignoring the usual reserve route and carried on across the RSPB fields to the farm track. At first these fields appeared as deserted as the reserve but gradually I found a few birds moving about - some Wrens, a Fieldfare, another Lapland Bunting, 16 Skylark, a Water Rail calling from a ditch reed bed, and lastly, dare I say it, a fine fox.
After that there was little else to do but follow the farm track back past frozen winter corn and Brewers Farm in the distance and down to the barn and my car. Briefly as I walked along the track, the sun came out but as I looked behind me I could see that mist was literally following me as I went. By the time I had got back to the car visiblity had all but gone and this was the case all the way along the Harty Road, where at the top of Capel Hill I bumped into Chris Gibbard and a few bird watcher friends who unfortunately had arrived at the same time as the mist. 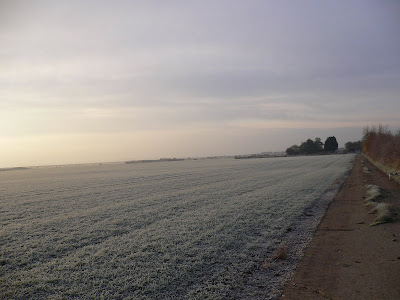