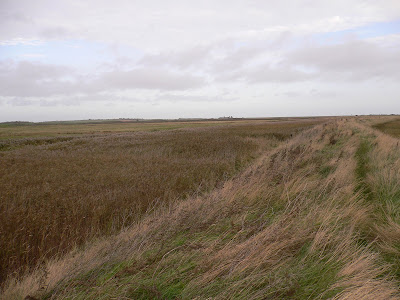 Despite going to the reserve most days this week it has been a fairly quiet and unevenful week, wildlife wise. Recent rains have made a difference to the surface of the reserve, softening up the top few inches and where livestock and vehicles have been it has begun to get quite muddy. However, there is still no obvious difference in the ditch levels, which the few visitors that appear remark on.
The photo above shows the wide phragmites reed beds that are alongside the seawall and one morning this week while it was windy I conducted a little experiment to answer a thought that I've often had when passing it, just how snug is it in there when its cold and windy. So, perhaps odd to some people's way of thinking, I made my way into the centre of the reed bed and squatted down and do you know, it was really wind-free and cosy in there, should I get stuck out ther one night, that's where I'll be!

Anyway, getting back to things more appropriate for someone of 63 years of age, we carried out our monthly WEBS count on Wednesday afternoon, in glorious, fairly calm and sunny weather. My section in the middle of the reserve produced one of the poorest counts that I've ever had but the two guys at either end had some really good counts at the two high-tide roosts. The Shellness Point roost had 2,000+ Knot and 5,000+ Oystercatcher alone, apart from the several other species there but it was the guy counting the roost below Harty Church that I most envious of. On the Swale he had a flock of 15 duck and 1 drake Eiders float past. Until about 4 years or so ago these lovely birds used to be a regular feature in the mouth of the Swale but are now rarely seen and still haven't been by me! Another bird that disappeared from the reserve around the same time was the Twite. Every winter we would see small flocks of these plain but delightful finches along the saltings in front of the reserve, differing from the Linnets by their more nasal call and their yellower bills. I quite liked them as a bird.

What else has happened, oh yes, last Saturday Harty had a visit from the Tickham Hunt and they spent most of the day galloping around most of Harty in pursuit of foxes, successfully so I'm told. Anyone who believes this guff about there being a Hunting Ban - something that the Hunt delights in hiding behind and Anti-hunt people are happy to believe is true - ought to witness the now increasingly regular meets on Harty. The huntsmen encourage the hounds to get after a fox, allow them to pursue one and are followed on quad bikes by terrier men ready to dig out and kill any foxes that are "lucky" to evade the hounds.
Personally, I have no problems with the killing of foxes as long as it is done instantly and humanely the second that it is seen, preferably by a rifle. The pursuit of the fox over many miles by the hounds though, until it's lungs give out, is quite sickening, has little to do with pest control and was rightfully "banned".

Lastly, just after dawn this morning, I heard the delightful call of my first Lapland Bunting of the winter as it flew past overhead. Just need a couple of Snow Buntings next.
Posted by Derek Faulkner at 10:40